“If Lord Chaitanya takes birth today, he has to re-discover Vrindavan again. Vrindavan is almost lost in the tall concrete buildings. The ancient swaroop (ethos) must not be compromised while executing any developmental project in Vrindavan”, said Cinestar Hema Malini, the Member of Parliament from Mathura.

She was addressing a meeting in a local hotel, which was organized to gain her support on the issue of the State Government’s ‘River Front Development Project’.

Hema Malini was very much concerned about the declining condition of Vrindavan’s ecology and heritage. “When Shri Dham Vrindavan was re-discovered 500 years ago by Shri Chaitanya Mahaprabhu, it was full of trees, creepers, vines and Tulsi. But those trees have been replaced by concrete structures.”

Interestingly, the organizers of the conference hoped that Hema Malini would announce something to get the hurdles removed in executing the River Front Development Project. Instead, the M.P’s statement has given a boost to the morale of the activists who have raised objection in the design of the project. 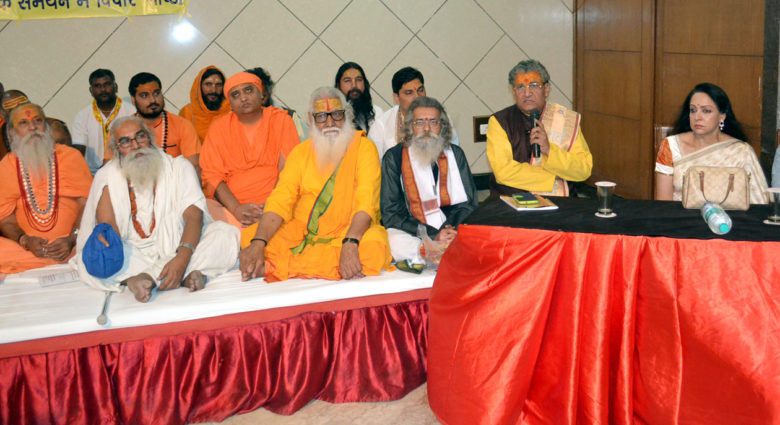 Acharya Naresh Narayan, a senior member of the Braj-Vrindavan Heritage Alliance has welcomed the MP’s statement. “We are happy to see that our MP is concerned about the degrading condition of Vrindavan. She must bring some projects from the Centre which revives the ethos of Vraja-Vrindavan,” said Acharya.