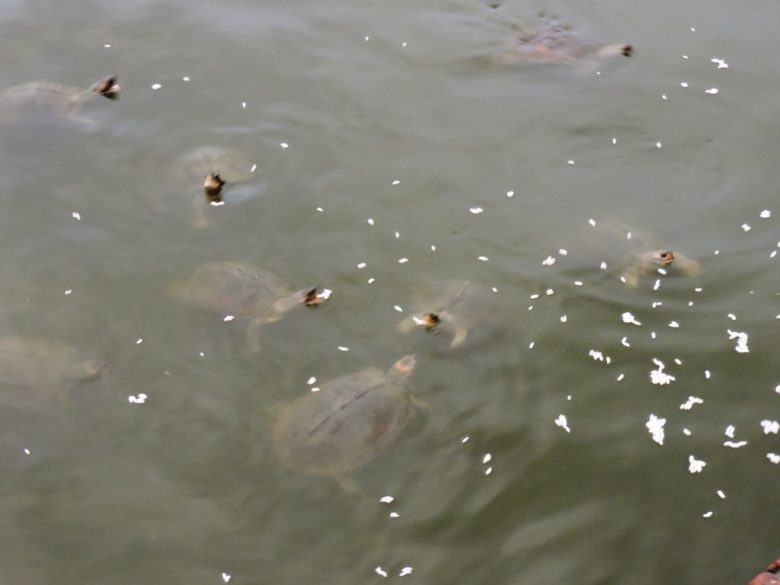 It seems oddly appropriate that Ganges water should be diverted to the Yamuna for the Ganga Dusserha celebrations on June 14. That Srimati Ganga Devi should come to the aid of her sister is entirely appropriate, though activists still hope for Yamuna Maharani to one day once abain be able to eventually flow pure and clean on her own strength.

The City Administration is gearing up to clean the Yamuna ahead of Ganga Dussehra next month. The condition of river is full of worms at the moment and the sewage is still flowing into it. Should the river not get fresh water before the holy dip, it is likely that the devotees will keep away from the river during the festival.

The Yamuna is thronging with red worms at the moment. The skimmer machine has been returned to the Central Government and so the cleaning process that was going on has been interrupted. The effects are being seen: garbage including poly bags are floating on the river.

The Mathura Municipal Corporation has started the cleaning of the drainage systems and has already cleaned the drains at Ambakhar, Bhuteshwar and Krishna Nagar areas. Other drains will also be cleaned soon with the help of JCBs. Other efforts are on to stop these drains from flowing directly into the river.

The City Administration (as part of the district bureaucracy connected to the State Government) has guided the Municipal Corporation to clean the drains and river as soon as possible before the Ganga Dussehra on June 14th. The instructions also include the smooth functioning of pumping stations. Two motors are currently running simultaneously at the Masani pumping station which has limited the flow of drain water in Yamuna, but hasn’t stopped totally.

Thousand of devotees are expected to take a holy dip ito the river next month at the occasion of Ganga Dussehra for which the administration is expecting more water into the river from the Okhla Baraj, unlike last year.

Petitioner Gopeshwar Nath Chaturvedi said that Ravidra Kumar (ADM Revenue and Nodal Officer) has sent an application to the concerned ministry to get increased water channeled into the river from the Ganges during the festival. He was given assurances of a positive result within a week.