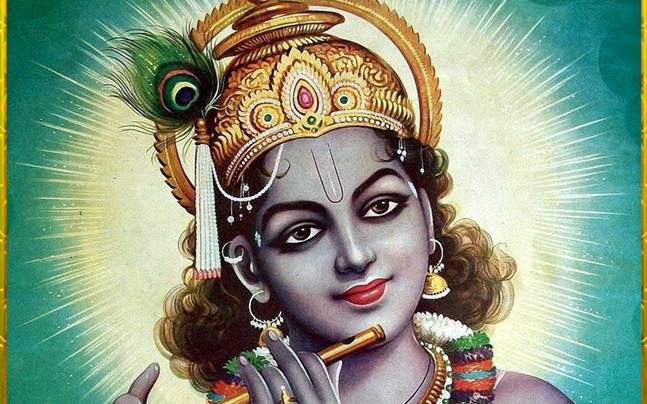 The Supreme Personality of Godhead / Krishna has all these fifty transcendental qualities in fullness as deep as the ocean. In other words, the extent of His qualities is inconceivable.

Besides all of the above-mentioned fifty qualities, Lord Krishna possesses five more, which are sometimes partially manifested in Lord Brahma or Lord Shiva. These transcendental qualities are as follows:

Krishna also possesses five other qualities, which are manifest in the body of Narayana / Vishnu, and they are listed as follows:

(56) He has inconceivable potency.
(57) Uncountable universes generate from His body.
(58) He is the original source of all incarnations.
(59) He is the giver of salvation to the enemies whom He kills.
(60) He is the attractor of liberated souls.

Besides these sixty transcendental qualities, Krishna has four more, which are not manifested even in the Vishnu / Narayana form of Godhead, what to speak of the demigods or living entities. They are as follows:

(61) He is the performer of wonderful varieties of pastimes (especially His childhood pastimes).
(62) He is surrounded by devotees endowed with wonderful love of Godhead.
(63) He can attract all living entities all over the universes by playing on His flute.
(64) He has a wonderful excellence of beauty which cannot be rivaled anywhere in the creation.

The Absolute Truth is anandamaya (desiring to increase His joy), hence from His original form He expands and becomes many. These emanations from the Supreme Person are of two categories: full expansions and partially manifested expansions. The Lord’s various full and partial expansions and the Lord Himself simultaneously co-exist, only appearing to manifest under the influence of time. These expansions of the Supreme Being are known as Vishnu-tattva, and they are also Supreme Absolute Truth. While non-different from the Lord, the Vishnu-tattvas all accept their own role as Godhead in the mood of Servitor to the “original” Supreme Being. This relationship is the foundation of Vedic monotheism, which encompasses the inconceivable, absolute personal nature of the original Godhead.

This is the reason why Krishna is called Param Purushottam, Purnavatar or Supreme Personality of Godhead.

“Learned scholars in transcendental subjects have carefully analyzed the summum bonum Krsna to have sixty-four principal attributes. All the expansions or categories of the Lord possess only some percentages of these attributes. But Sri Krsna is the possessor of the attributes cent percent.

And His personal expansions such as svayam-prakasa, tad-ekatma up to the categories of the avataras who are all visnu-tattva, possess up to ninety-three percent of these transcendental attributes.

Lord Siva, who is neither avatara nor avesa nor in between them, possesses almost eighty-four percent of the attributes.

The godly living beings who are all residents of the planets in the spiritual sky are eternal associates of God in different spiritual planets called Hari-dhama and Mahesa-dhama.

The abode of Lord Krsna above all spiritual planets is called Krsnaloka or Goloka Vrndavana, and the perfected living being, by developing seventy-eight percent of the above attributes in fullness, can enter the planet of Krsnaloka after leaving the present material body.”