The half-moon bridge, which has already been a problem for Yamuna previously, is now finally getting dismantled after the instructions from the State Government. There are around 20 pillars opposite Keshi Ghat in Yamuna, each being 12 feet in height, which is a living proof of waste of Government funds in the name of development.

In 2008, the then BSP Government decided to construct a half-moon shaped bridge from Shringar Ghat to Keshi Ghat. In order to have a planned development for Vrindavan, Braj Vrindavan Heritage Foundation (BVHA) went to find the master plan at the contractor’s office and at the office of MVDA in the year 2010. To everyone’s surprise, there was no master plan of the bridge anywhere. The second surprise was that the MVDA had nothing to do with the bridge and that it is entirely under the Public Works Department.

After getting the necessary documents from PWD and MVDA offices, environment activist Madhu Mangal Shukla filed an RTI (Right to Information) with Archaeological Survey of India (ASI) to know the legality of the development. The bridge construction already started by that time, in front of Madan Mohan Temple and Yugal Kishore temple which are preserved by ASI itself. The RTI also mentioned that the half-moon bridge is being prepared on the flood plain of Yamuna, which in itself is illegal as per the orders by the Government.  Getting no response from the ASI, Mr. Shukla took the case to Allahabad High Court in the year 2010, which put stay on further construction of the bridge.

Later on the State Government insisted to take back the stay orders, but halted the bridge construction works also. Yamuna has already gone a little far from the river front after the construction of the pillars, which were basically leading to nowhere. In April this year, Senior Officer and Zonal Incharge by the State Government, Mr. R.D. Paliwal approved the dismantling of these pillars which again will cost lacs of Government funds. Based on initial estimations. the dismantling will cost more than 1.5 crore rupees. 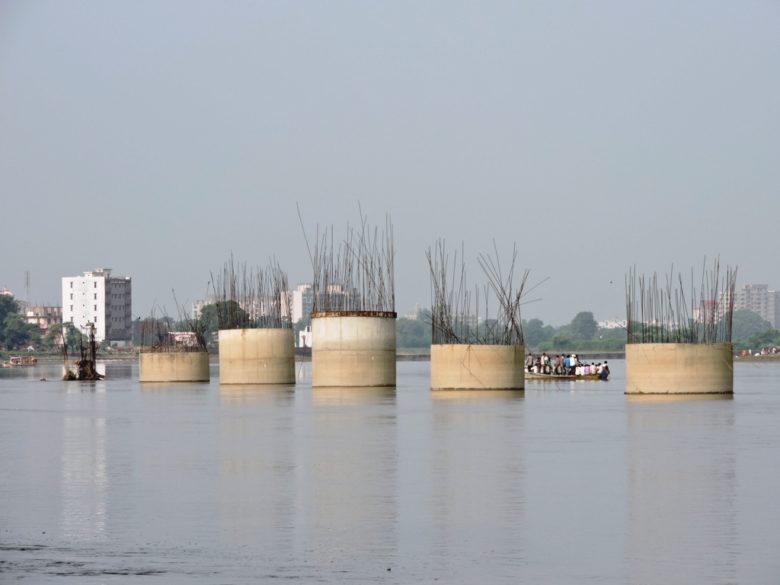