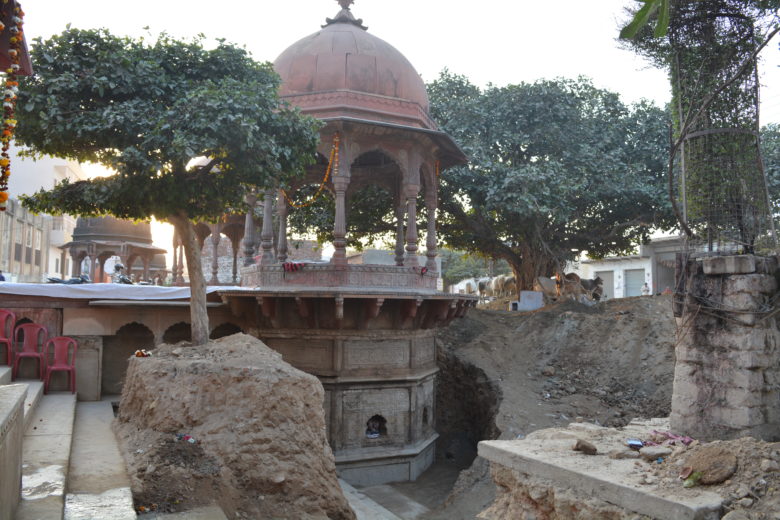 The demand for restoring the ancient ghats of Vrindavan is getting louder. The Brajwasis have again started to demand that Yamuna should be brought back to its original ghats. The excavation of the Vihar Ghat has made the brajwasis to re-think about the traditional ghats of Vrindavan.

The lost treasure of heritage Vihar Ghat is being reclaimed by the Tirtha Purohit Parivar. Twenty steps of the ancient Vihar Ghat came out from the debris, after six men continued digging for a month. The excavation of the ghats has made the brajwasis curious on what more treasure would come out of excavation. The magnificent stone work of the ghat mesmerized everyone, who visited this ghat. The burjis are intricately perforated with decorative stones screen. The miniature art inscribed on the stone of this ghat is unmatched with any other ghat.

According to Mr. F.S. Growse the then District Collector of Mathura, during British India, this Ghat was built by Shri Appa Ram from Dakhin.On the occasion of Bihar Panchami, the appearance day of Thakur Shri Banke Bihari ji, a grand Aarati was arranged at Vihar Ghat. Several saints, brajwasis, acharyas, priests participated in the Aarati and re-affirmed their commitment of protecting the heritage ghats of Vrindavan.

Shri Sanjay Ballabh Gautam, the coordinator of the event said, “The entire series of the 48 heritage ghats must be excavated and restored by the archeological department. Yamuna must be brought back to its original ghats. We can’t allow Yamuna is pushed off from its original course for any developmental project.”

“The Ghats of Yamuna in Vrindavan are more beautiful than the ghats of Varanasi. But due to the lack of water in Yamuna and its nature of changing its bed allowed the people to dump the garbage and debris on the ghats and several of them have been permanently damaged which can’t be recovered,” said Acharya Naresh Narayan.

Shri Chhote Gautam, a councilor from the Vrindavan Municipality said, “The government should take the residents of Vrindavan into confidence before initiating any project. The residents are kept in dark while bringing any project of development. Any developmental project should be planned according to the history and ethos of this town.”

Dr. Chandra Prakash Sharma said, “The sixteenth century heritage ghats were built the Zamindars and the kings to commemorate the pastimes of Lord Krishna. But due to the government neglect and ignorance we are losing them.”