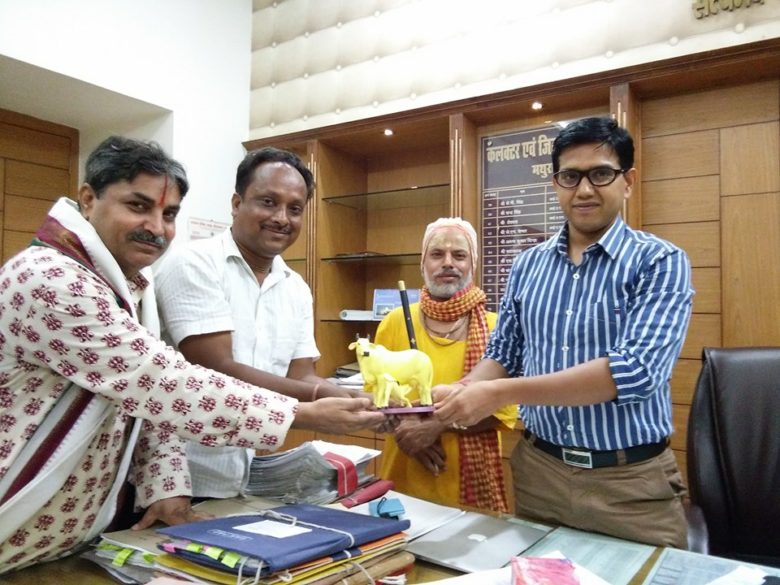 The Braj Vrindavan Heritage Alliance opposes the new Yamuna riverfront development project in Vrindavan. It registered its protest with the District Magistrate of Mathura, Shri Rajesh Kumar. A BVHA delegation led by Acharya Naresh Narayan met the DM to apprise their concern on the ongoing riverfront development project. The delegation demanded the DM to share the detailed project report with the “citizen forum” of the BVHA.

The delegates said that it appears prima facie that the Yamuna bed beyond the “illegal road” will be filled with soil dredged from the river up to 100 meters beyond the Parikrama Marg. This will push the river even further from the ghats.

“According to the newspaper reports and other reliable sources we came to know that there is a proposal of forestation, filling the Yamuna bed up to 100 meters or more. This will further force the Yamuna further from the centuries old ghats, which is highly objectionable,” said Acharya Naresh Narayan.

Shri Madhumangal Shukla said, “There are only a few ghats left, by which the Yamuna flows during the monsoon season. We would like to see a sufficient flow of water be maintained so that the river remains close to the original ghats all year round. The Yamuna could be brought back to at least some of its old ghats with only a little effort. The proposal of filling the river bed with soil will lead to disastrous consequence in future.”

Shri Tamal Krishna Das Brahmachari from Imli Tala said, “The government should preserve the ancient Yamuna Ghats, as they were built by the kings and zamindars of different estates, as a way of remembering different pastimes of Krishna. Each Yamuna Ghat of Vrindavan has a history related to those pastimes.”

“The proposed construction of a road or the building of new ghats supplanting the old magnificent ghats will pose a threat to the heritage and culture of Vrindavan, “ contended Shri Tamal Krishna.

Friends of Vrindavan’s Jagannath Poddar said, “Allowing the project to continue without environmental impact and social impact assessments will result in irreversible damage to the ecology and heritage of Vrindavan. Historically, the Yamuna river system as a whole provided ecosystem services such as natural flood water control, ground water recharging, habitats for different flora and fauna, promoting biodiversity, and ameliorating adverse climatic conditions. Years of encroachment and dumping, effectively sanctioned by urban planning and urban governance decisions made by the local governments, further threaten this interconnected watershed level system.”

After an hour long discussion the District Magistrate assured the delegates that the project will be executed only with the consent of the residents. He said that he has declared the Yamuna bank as a “green zone”, no new construction will be allowed on the Yamuna bank or floodplain. He further said the massive forestation is being planned on the other side of the Yamuna. He promised that he will make personal visit to Vrindavan to understand the BVHA’s proposal of how the riverfront should be developed.