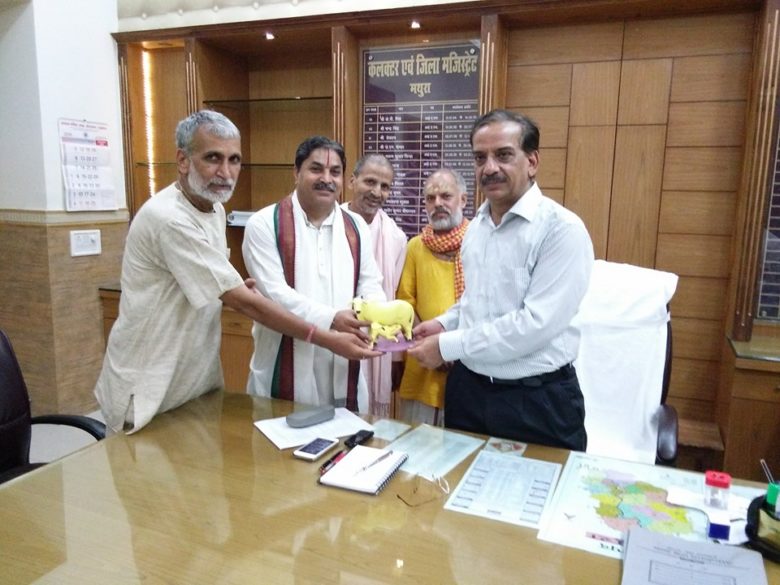 A five member BVHA delegation led by Shri Damodar Shashtri met the new District Magistrate Shri Nikhil Chandra Shukla on Wednesday to submit a memorandum against the Yamuna Ghat Beautification Project. The delegation consisted of two petitioners Shri Gopeshwar Nath Chaturvedi and Shri Madhu Mangal Shukla who have been fighting the legal battles to save the Yamuna and its ghats.

A resolution to legally challenge the project was taken in a meeting of the Braj – Vrindavan Heritage Alliance, organized at the Gokulananda Mandir, in which several stake holders, including acharyas, saints, and traders participated. A core committee was constituted to submit the memorandum to the District Magistrate of Mathura and other officials.

The memorandum said that that the construction of the new ghats, in order to extend the ancient ones, will further push the Yamuna from its original course. It appears to be blatant violation of the rules made for the rivers and water bodies.

Keshi Ghat was the only remaining ghat where Yamuna touched Vrindavan. But the project has pushed the ghat further away. The proposed new ghats can never match the beautiful architectural patterns, pillars, arches, jharokhas of the ancient ghats. The construction of the new ghats beyond the Parikrama Marg on the river bank will legitimize the illegal encroachment on the Yamuna Flood Plain.

“Instead of building the new ghats, the ancient ghats should be restored by removing the illegal road built in front of it,” said Shri Damodar Shashtri, who was leading the delegation.

Shri Gopeshwar Nath Chaturvedi said, “We have come to know from the reliable sources and the local media that a parallel drain will be dug beside the river, which will be released three four kilometers away in the forests, without treatment. There is no provision of building a sewage treatment plant (STP) in the project. Consequently, the ground water will be polluted, and it may pollute the river again,” said Shri Chaturvedi who is the original petitioner for the protection and preservation of Yamuna River in Mathura.

“We have been demanding to have a copy of the Detailed Project Report, which has not been provided to us. Apparently, there no DPR of the project is ready to be shared with the people, and the project is being implemented without any environment clearances,” said Acharya Naresh Narayan, who is a senior member of the BVHA.