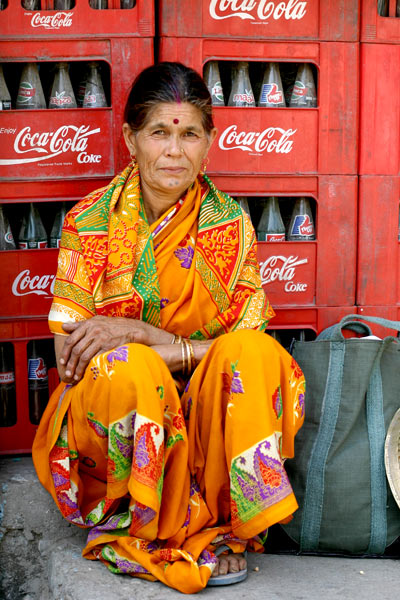 Swami Ram Dev, preaching against multinationals, has become national hero in the last year. He has drawn the attention of hundreds and thousands of people, encouraging them to use Coca Cola to wash their toilets: it kills all germs.

All the leading saints and Bhagavat Acharyas of Braj met in a large closed door meeting with the chief of RSS (Rashtriya Swayamsevak Sang), the chief indian organisation and the mentor of BJP Sri K.S. Sudarshan. The agenda of the meeting was to stop the brutal destruction of heritage hills in the Dig and Kamak sub division of Rajasthan, which is part of Braj. Every saint spoke vehemently against the irrational and self destructive policies of the BJP government in Rajasthan. Unfortunately Mr. Sudarshan did not make any positive commitment to end this mindless mining by which 2000 trucks load of masonry stone is being removed from the sacred mountains. At this rate the holy mountains of Braj will vanish in a very short while. Dr. Ramji Lal Shastri of Man Mandir Varsana, Sri Radhakand Shastri, Vice President of Braj Rakshak Dal and Sri Haribol Baba, Convener Hill protection movement, they made strong speeches with documentary evidences to educate the RSS leader about the illegality of mining in Braj. Phool Dol das Maharaja of Vrindavan and Ram Devanand Saraswati gave a warning to the RSS leader that if he does not intervene to stop this illegal mining then the sadhus of Braj, and devotees of Krishna, will be forced to demonstrate publicly in Delhi against the ineffectiveness of RSS and BJP.