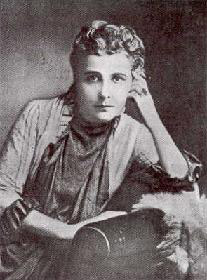 Annie Wood Besant (1847-1933) was a prominent leader of India's freedom movement, member of the Indian National Congress, and of the Theosophical Society. George Bernard Shaw regarded her the "greatest woman public speaker of her time."

She was also fundamentally instrumental in freeing the country she lost her heart and sublimed her soul to: India. Besant is an indivisible part of the composite struggle for independent India because she declared most passionately, "I love the Indian people as I love none other. My heart and my mind… have long been laid on the alter of the Motherland."

Annie Besant, proponent of the philosophy of Theosophy, gave many a lecture in which she aired her views that India was a victim of the mischief wrought by Christian missionaries.

A friend of Swami Vivekananda, Mrs. Besant was trying to lead Indians back to their own gods and arouse their sense of self-respect and pride in the greatness of their religions.

This is what she said on India and Hinduism :

"After a study of some forty years and more of the great religions of the world, I find none so perfect, none so scientific, none so philosophical and none so spiritual that the great religion known by the name of Hinduism. Make no mistake, without Hinduism, India has no future. Hinduism is the soil in to which India's roots are stuck and torn out of that she will inevitably wither as a tree torn out from its place. And if Hindus do not maintain Hinduism who shall save it? If India's own children do not cling to her faith who shall guard it. India alone can save India and India and Hinduism are one. "

Annie Besant thought that "among the priceless teachings that may be found in the great Indian epic Mahabharata, there is none so rare and priceless as the Gita."

"This is the India of which I speak – the India which, as I said, is to me the Holy Land. For those who, though born for this life in a Western land and clad in a Western body, can yet look back to earlier incarnations in which they drank the milk of spiritual wisdom from the breast of their true mother – they must feel ever the magic of her immemorial past, must dwell ever under the spell of her deathless fascination; for they are bound to India by all the sacred memories of their past; and with her, too, are bound up all the radiant hopes of their future, a future which they know they will share with her who is their true mother in the soul-life."

Mrs. Besant remarked at Calcutta: "India is the mother of religion. In her are combined science and religion in perfect harmony, and that is the Hindu religion, and it is India that shall be again the spiritual mother of the world."

“During the early life of a Nation, religion is an essential for the binding together of the individuals who make the nation. India was born, as it were, in the womb of Hinduism, and her body was for long shaped by that religion. Religion is a binding force, and India has had a longer binding together by religion than any other Nation in the world, as she is the oldest of the living Nations.”