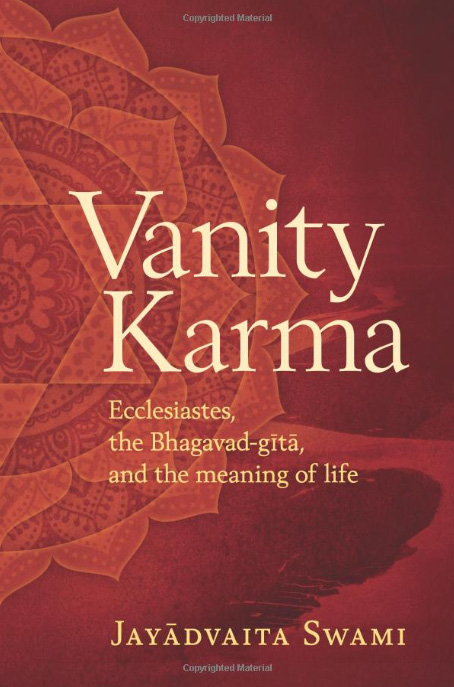 Vanity Karma, a new book by ISKCON guru Jayadvaita Swami, has been presented with the 2016 Benjamin Franklin gold award by the Independent Book Publishers Association.

Published by the Bhaktivedanta Book Trust, it won best book of the year in the category of “religion.”

The award was presented on April 8th at the 28th Annual IBPA Publishing University in Salt Lake City, Utah.

The book, subtitled “Ecclesiastes, the Bhagavad-gita, and the Search for the Meaning of Life,” explores two profound wisdom texts – one a book from the Old Testament of the Bible, the other Lord Krishna’s words to Arjuna.

Both mean a lot personally to Jayadvaita Swami — Ecclesiastes set him on his spiritual path, which led him to the Bhagavad-gita. And he hopes his exploration of them in Vanity Karma helps others on their own spiritual journeys.

“I am grateful that my book has received this distinguished award,” he said in his acceptance speech. “But I can’t claim the credit for it. The credit belongs not to me but to the sages whose wisdom the book brings together in dialogue.”

“The biblical book of Ecclesiastes,” Jayadvaita Swami continued, “Asks in the clearest terms what the point of our life is and for what it is that we work so hard, day after day, in our lives under the sun.

“And the Bhagavad-gita, the jewel of India’s ancient texts of wisdom, examines these questions with the understanding that each of us, though struggling in a world of birth and death, is a spiritual spark of consciousness, immortal and imperishable.

“From the Gita we learn how our karma — what we do in our lives, and what comes back to us as a result — can be not for vanity — for nothing — but for the perfection of spiritual realization. And we learn how, under the sun, such realization gives meaning to our lives.

“The Gita’s divine speaker, Sri Krishna, says, “This knowledge is the king of education, the most secret of all secrets. It is the purest knowledge, and because it gives direct perception of the self by realization, it is the perfection of religion. It is everlasting, and it is joyfully performed.”

“So I owe the credit for this book, Vanity Karma, to the sages who have given us the wisdom of Ecclesiastes and the wisdom of the Bhagavad-gita, and most especially to my spiritual teacher, His Divine Grace A. C. Bhaktivedanta Swami Prabhupada.”

The Swami concluded, “Acknowledging where the credit rightfully belongs, I gratefully accept this award.”

Vanity Karma is now available on Amazon.com as a 384-page paperback, and is getting rave reviews from academics and layreaders alike.

“Vanity Karma raises the most profound question asked by human beings over the ages, namely, ‘Why are we here on earth; what is the meaning of our existence?’” says Helen Rose Ebaugh, Emeritus Professor of Sociology at the University of Houston. “The swami exposes this question as the theme of Ecclesiastes and then answers the question with themes from the Bhagavad-gita.”

“The book presents the Bhagavad-gita in language and images that speak to universal audiences,” she adds. “One of the strengths of the book is that mystical and deeply philosophical issues are described in language that is clear for the layman. It is essentially the journey whereby the swami answered the basic question that troubled his early years when he discovered and began living the life outlined in the Bhagavad-gita. It is both an academic and deeply touching story of the peace and serenity that is possible when human beings respond to the One Sacred Being of the universe.”