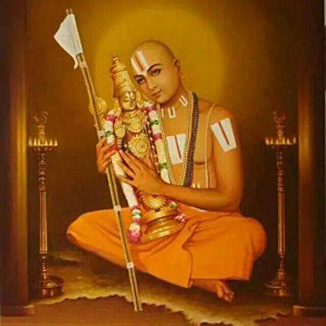 A. The philosophy of the Gaudiya sampradaya and that of the Ramanuja sampradaya are not the same. Ramanuja, for example, attributes internal distinction (svagatabheda) to Brahman, whereas the Gaudiyas do not. For Ramanuja, Brahman’s qualities (as he views them)—the jivas, and the world—are not the same as that which they qualify (Brahman). However, neither can these qualities exist outside of that which they qualify. Thus the two are not different from one another either. In Ramanuja’s view, a special relationship exists between Brahman, the jivas, and the world. He calls this relationship aprthak-siddhi, or inseparability. With this term Ramanuja seeks to logically explain the identity and difference of Brahman.

It appears that in reality Ramanuja finds it difficult to describe the relationship of identity and difference but accepts both of them. Indeed, according to Ramanuja himself (Sribhasya 2.2.12), aprthak-siddhi is not strictly a relation, although his followers such as Vedanta Desika sometimes speak of it as such. Thus through careful examination both scholars and acaryas of other sampradayas came to conclude that acceptance of Ramanuja’s term aprthak-siddhi really involves forgoing logic. In this regard, the Gaudiya acaryas have determined that this logical shortcoming of Sri Ramanuja’s metaphysic is resolved with the concept of acintya, or inconceivability with regard to the nature of ultimate reality and its being simultaneously one and different.

Thus the Gaudiyas feel that the metaphysic of acintya-bhedabheda tattva better explains the nature of ultimate reality, and that this explanation is an improvement on the efforts of Ramanuja and others. Ramanuja and others have struggled to come to grips with the fact that the concepts of either oneness or difference are inadequate to comprehensively explain the nature of the Absolute.

The Gaudiyas have concluded that Brahman is both one and different simultaneously, and that this is possible because the Absolute possesses inconceivable power (acintya-sakti). Others have developed terms such as anirvacaniya (Sankara), aprthak-siddhi (Ramanuja), svabhavika (Nimbarka), visesa (Madhva), and samavaya (Vallabha) to bring logic to bear on the oneness and difference of Brahman, when in reality the simultaneous oneness and difference of the absolute is acintya (inconceivable). Indeed, careful study of these other doctrines of Vedanta reveals that they implicitly acknowledge the acintya-sakti of the Absolute but are unable to identify it as such.

Therefore, the Gaudiyas lay claim to accepting the nature of the Absolute (and scripture) “as it is” with regard to its oneness and difference. In this way they have sought not to inordinately impose the limits of logic on the nature of being, but rather accept it for what it is and attribute its nature to the acintya-sakti, or the inconceivability of God.