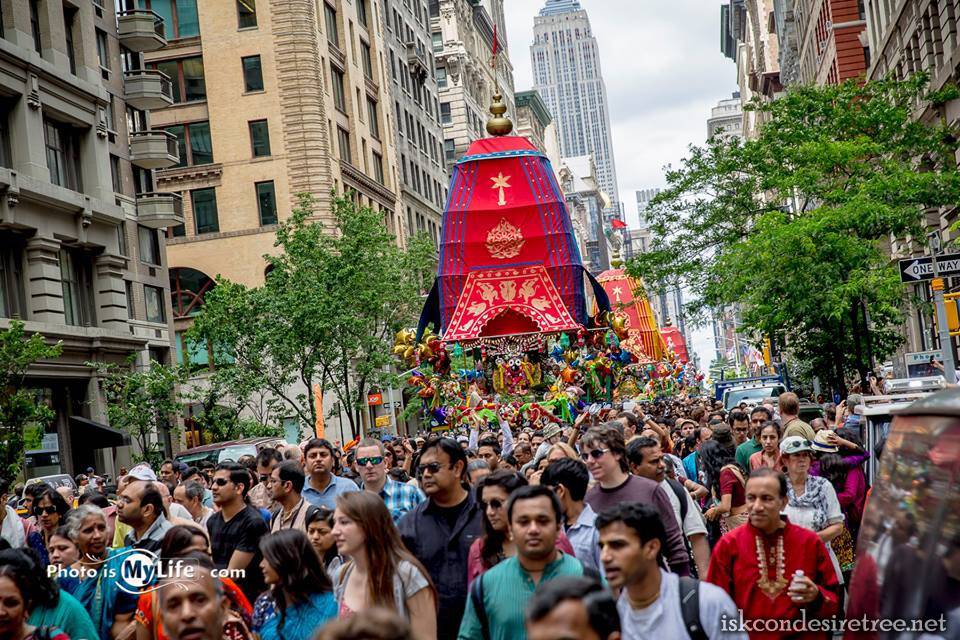 Three 40-foot high, colorfully-decorated Rathayatra carts hand-pulled by devotees and surrounded by thousands of chanting and dancing people —rolled down New York’s 5th Avenue June 11 to kickoff a national celebration of the 50th Anniversary of the International Society for Krishna Consciousness better known as the Hare Krishna Movement.

The Rathayatra parade began at 12 P.M. at West 45th Street and 5th Avenue, and ended at Washington Square Park where it joined the “Hare Krishna Festival” for an afternoon of free vegetarian food; stage performances of classical Bharatanatyam dance; a one hour dramatic rendition of the Ramayana performed by an theater troupe from the England; and multiple booths about reincarnation, meditation, and yoga.

ISKCON’s founder Bhaktivedanta Swami, first came to New York City from India in September, 1965 to spread the teachings of Lord Krishna to the western world. “It’s very special for us to kick off the 50th Anniversary of ISKCON where he began right here in New York,” said Amrita Hari, spokeswoman for the Krishna society.

Bhaktivedanta Swami affectionately known as Srila Prabhupada, arrived alone in New York City at the age of 70 to fulfill his guru’s order to spread Vaishnava teachings to the English- speaking world. Prabhupada arrived in America with just $7 and several trunks of his translations and commentaries on ancient Sanskrit texts, the Bhagavata Purana.

After struggling for almost a year, the Swami attracted a core of followers among young American spiritual seekers of the 1960’s, and on July 13, 1966 he incorporated his fledgling community as the International Society for Krishna Consciousness.

Despite its humble beginnings, over the past 50 years ISKCON has grown to a global community of over 600 temples, 110 vegetarian restaurants, and 65 farms and eco villages. The affiliated Bhaktivedanta Book Trust has sold 516 million books and magazines on Krishna consciousness, and Hare Krishna Food Relief programs feed a free vegetarian lunch to 1.2 million school children each day in India through its mid-day meals program in affiliation with the Indian government.

Celebrations later this year will include dozens of Rathayatra parades in cities worldwide including Washington, DC, Los Angeles, London, and Paris, and gala events at the Sydney Opera House, Washington, DC, and other major venues. In addition, an ISKCON sannyasi is walking across the United States to spread Lord Krishna’s message of devotion and the Bhagavadgita.