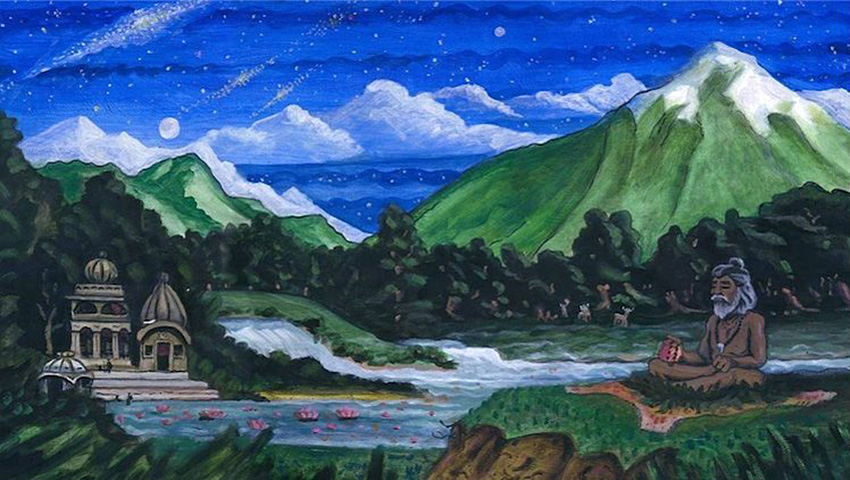 With his first novel, “The Yoga Zapper,” ISKCON devotee Hari Mohan Das (Mohan Ashtakala) has blended exciting fantasy storytelling with themes from the Srimad-Bhagavatam, including the prophesied appearance of Kalki Avatar at the end of Kali Yuga.

He hopes to entertain and educate a diverse Western audience with this potent mix, published by mid-sized Canadian publisher Books We Love.

Mohan has all the requisite background for a mystical novel like this. As a child, he grew up in North India against the backdrop of the Himalayas.

“My uncle was an officer with the Indian Forestry Service, and we lived close to the jungle,” he says. “I remember hearing tigers at night, and I had a pet deer. I had so many adventures! So a lot of the descriptions and authentic feel of India in my novel come from those experiences.”

Mohan later moved to Canada with his parents, and as an adult joined ISKCON, receiving initiation as a brahmana priest from Bhakti Svarupa Damodara Swami. He has studied Vaishnava scriptures and their stories in depth, and presented at interfaith and diversity conferences at various churches and schools.

He also edited a local newspaper for fourteen years and had articles published in the Denver Post, before moving to Calgary, Canada, where he now lives with his wife Anuradha, son Hrishi and daughter Gopi.

The recent publication of The Yoga Zapper is the culmination of many years of work for Mohan, who hopes to share the depth of the Vaishnava tradition through the medium of modern page-turners.

The plot of The Yoga Zapper is certainly intriguing enough to draw readers in. While hiking in the Himalayas, two American brothers – who act as the eyes and ears for Western readers – discover an ancient Sanskrit scripture that contains instructions on how to time travel through chanting mantras and performing a yajna. They dub it “The Yoga Zapper.”

The brothers convince a priest at a local Hare Krishna temple to perform the ritual contained in the book. Steve, who has an intellectual approach to life, is transported to a peaceful village in Satya Yuga, at the beginning of time. There, he falls in love with the beautiful Shanti and learns to open his heart and understand the meaning of duty.

Meanwhile Jack, who is immature and self-centered, finds himself at the tail end of the current dark age of Kali, where he gets entangled in the treachery and intrigue of a civilization unraveling at the end of time. Forced to finally become accountable for his previous actions, he is imprisoned by a pitiless world-ruling dictator.

“According to Vedic scriptures, as time progresses, things actually get worse, and at the end of time we will have a very evil dystopian kind of future,” Mohan says. “Then, when the cycle of time starts again, things will become peaceful and contemplative. In my novel, I based the dystopian future on some current trends such as environmental degradation and the control the government and other bodies have over us in terms of our lack of privacy. I then took these a step further and imagined a use of genetics where people are instantly identified and connected to a vast network, which is used to control and tax them.”

But there are also light forces at work. Growing, maturing, and seizing his destiny, Jack escapes from prison and goes to Shambala. This is a valley hidden deep in the Himalayas, where Vedic scriptures predict the Kalki Avatar will appear at the end of Kali Yuga to destroy miscreant leaders, reset the time cycle and bring the world back to the peaceful Satya Yuga.

In the novel, when the evil ruler discovers Shambala and attacks it, Kalki does indeed descend, and an epic world war erupts, featuring mystical weapons and ancient flying aircraft called vimanas.

As well as being entertaining, The Yoga Zapper contains strong environmental themes, a darkly humorous social commentary, and introducers readers to many concepts of the Vedic culture and philosophy.

“Combining an exciting story with the scriptural elements in an engaging way was a challenge,” Mohan says. “I wanted to not shove the philosophy down people’s throats, but to bring it out in a way that’s easy to understand and appreciate. I hope I’ve done that.”

So far, Mohan has received good responses from yoga practioners, who are fascinated to read about some of the authentic narratives of the tradition; as well as from the interfaith community and fans of fantasy and Eastern mythology.

“I’ve written this novel mainly for a general public audience,” Hari Mohan says. “But I’m finding that ISKCON devotees are also curious about the unique approach I’ve taken. I hope some will be inspired to make their own contributions to this genre.”

The Yoga Zapper is available now at most major chain and independent book stores in the English-speaking world. It is also available in digital and print formats online at Amazon.com (http://amzn.to/1KSXX7X), Barnes and Noble (http://bit.ly/1iV8N3R), Nook (http://bit.ly/1Pcv8Xe), and Goodreads (http://bit.ly/1LqAQ8h).