Hindus presented a groundbreaking memorandum to European Parliament (EP) President Hans-Gert Pottering yesterday asking Hinduism to be recognized fully and officially in all the 27 member states of EP. 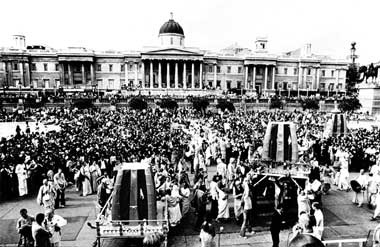 Zed, who is president of Universal Society of Hinduism, also asked for announcement of Diwali as major festival of European Union (EU), consulting Hindus at national levels on religious and related issues as equal partners, adequate Hindu representation in various EU bodies, fair treatment of all major religions instead of patronizing only one kind of religion or denomination, complete freedom of practice of chosen religion by the citizens, availability of suitable and adequate facilities for Hindu funerals, and promotion of interfaith dialogue.

Rajan Zed said that acquiring permits for building new Hindu temples was a difficult and cumbersome process and many times ended in delay or denial. He asked for introduction of comparative religion as a subject in high schools, including all the major religions of the world, and added that states should work for more assimilation and inclusiveness of all major religions.

Zed told Pottering that EU should ensure better labeling of foods clarifying that whether the contents included any non-vegetarian (meat, seafood, eggs, etc.) matter or the contents were purely vegetarian.

Rajan Zed further noted that there were reports that in an EU country, schools refused to mention "Hindu" in the "religion" column of student records and asked students/parents to bring certificates to prove that they were Hindu. This practice should be stopped immediately and whatever religion the student (in case he/she was adult) or his/her parents (in case he/she was minor) mention, should be included in the records, Zed stressed,

Zed pointed out that in an EU country, municipalities reportedly avoided writing "Hindu" in the "religion" column on birth certificates and instead wrote "no religion" or left blank. Municipalities in EU area should be clearly directed to write whatever religion parents of the child (whose birth certificate they were issuing) told them to write, without asking any questions.

Zed also mentioned that there were allegations of glass ceiling for top jobs and institutional discrimination.

This was the first major formal visit of a Hindu leader to EP during the current European Year of Intercultural Dialogue (EYID). Various other world religious leaders who visited EP as part of EYID include Orthodox Patriarch Bartholomew, Dalai Lama, Grand Mufti of Syria and Chief Rabbi Jonathan Sacks.

Rajan Zed stated in the memo that Hinduism was the oldest and third largest religion of the world with a rich philosophical thought. EP and EU should be more attentive to the needs of Hinduism and Hindus. Number of Hindus had been growing in Europe and now every country of Europe had considerable Hinduism presence, with total numbers reaching around two million.

Zed recited Gayatri Mantra from Rigveda (dated around 5,000 to 6,000 BC, Editor's note) in the presence of Pottering and others at the beginning of the meeting and presented Pottering a copy of Bhagavadgita (ancient Hindu scripture). Deputy Head of President's Cabinet, Ciril Stokelj, was also present in the meeting.

Rajan Zed read the groundbreaking first Hindu opening prayer in United States Senate in Washington DC during its 218 years history. He is one of the panelists for "On Faith", a prestigious interactive conversation on religion produced jointly by Newsweek and washingtonpost.com. He also recited historic first Hindu prayers in California, Arizona, Washington, Utah, New Mexico, and Nevada Senates; Arizona House of Representatives and Nevada Assembly in USA. He is Spiritual Advisor to the National Association of Interchurch and Interfaith Families, Director of Interfaith Relations of Nevada Clergy Association, and has been recognized by various organizations for his efforts in interfaith dialogue.

The EP consists of 785 elected members from 27 countries representing 492 million people. The EP and European Council established EYID in view of increasingly important role of intercultural dialogue in fostering European identity and citizenship.