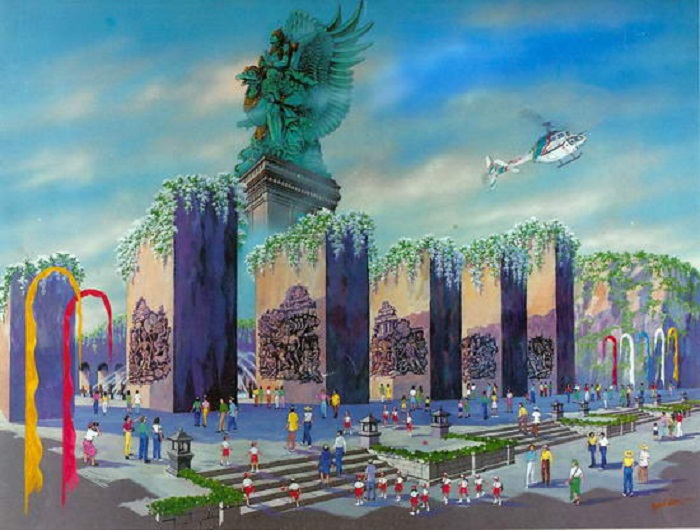 A giant statue of Hindu Lord Vishnu is being built in Bali (a Hindu-based island in Indonesia), which is claimed to be “one of the tallest and largest modern day sculptures”, and will reportedly be ready by 2017.

This 150 meters high and 64 meters wide statue is claimed to be bigger than Statue of Liberty in New York and Christ the Redeemer statue in Brazil, and will be visible from 20 kilometers away.

It will be the main attraction of Garuda Wisnu Kencana Cultural Park in Ungasan, currently run by PT Alam Sutera Realty Indonesia. Being created by renowned Indonesian sculptor I Nyoman Nuarta, it shows Lord Vishnu sitting on Garuda. Some core parts of the statue will be gold layered. From his workshop in Bandung (West Java), Nuarta carves the statue in several parts, consisting of 24 segments and formed with 754 modules made of copper and brass coated patina acid, which are then transported to Southern Bali, reports suggest.

Rajan Zed, who is President of Universal Society of Hinduism, hoped that this would help create awareness about Hinduism, oldest and third largest religion of the world with about one billion adherents. He urged the Cultural Park management to make available information about Hinduism philosophy, concepts and traditions for the stream of visitors.

Weighing about 4,000 tons, this bulkier copper statue with magnificent carvings, will be on a 30,000-square-meter pedestal built on a 10,000-square-meter of land. Inside of the pedestal will reportedly contain several facilities, like a multifunction ballroom to be utilized for international conferences, and some galleries to exhibit the cultural art creations.

The statue and its pedestal will be surrounded by over 60-hectares of Cultural Park. It is also planned to build a museum showcasing the two-decades of statue development.
Lord Vishnu is “preserver” in the Hindu triad with Lord Brahma and Lord Shiva as the aspect of the Supreme. He has ten incarnations to establish dharma (divine law). Moksh (liberation) is the ultimate goal of Hinduism.

Indonesia has the largest Muslim population than any other country in the world; where Muslims form about 88% of the population and Hindus about 3%, but are mostly isolated to the island of Bali.