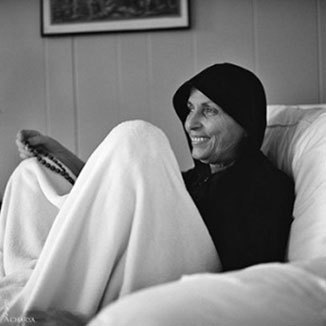 In the Bhagavad Gita, Krishna uses the phrase ‘tattva-darsi’ to describe a self-realized sage. Literally meaning ‘one who has seen the truth’, the word ‘tattva’ specifically indicates ‘a truth that is knowable’. Meeting someone whose character radiates the truth confirms for us that the perfection of yoga is attainable if we’re determined to follow in their footsteps.

A tattva-darsi has the ability to see all beings as equal parts of the one Supreme Being and a natural inclination to offer love to all beings accordingly. To become love itself is to become a universal conduit for divine love. Such a person is living proof that jnana-yoga kriya, action based on knowledge of the truth, cleanses one’s consciousness of all inebrieties and purifies one’s heart of all antipathy.

The opportunity to keep company with such a rare soul is truly a blessing and one meets such a person only by good fortune. It was my good fortune to know one such person.

In 1980 I spent the coldest winter of my life at an intentional spiritual farm community in central Pennsylvania called Gita Nagari. It was there that I first met Kaulini dasi. For the preceding 6 years, Mother Kaulini (as she is affectionately and respectfully known) had been living a life of action based on knowledge of the truth. She was fully dedicated to her practice and I never saw her idle for a moment; she was constantly engaged in spiritual activity.

Practically all of the activities that she so lovingly performed required an exceptional level of renunciation and a high tolerance for austerity. Actually, just living at Gita Nagari required more of those things than I could summon, which is why I only lasted one winter. Mother Kaulini stayed there for almost 30 more years. She purposely chose a life that was both simple and challenging. By embracing a total commitment to spiritual life, she became spiritually blissful. And her bliss radiated out to everyone she met. Over time she became an ever-expanding conduit of divine love. Not surprisingly, everyone who knew her loved her. When we become a conduit for divine love, love comes back to us many fold.

In time, Mother Kaulini’s health declined but she remained dedicated to her service at Gita Nagari until a couple who were close to her asked her to please come and live with them so that they could take care of her. Mother Kaulini acquiesced and made her home in upstate New York for several years.

Last week, Mother Kaulini asked her friends to take her back to Gita Nagari. Having spent a long time undergoing Cancer treatment, she arrived a point where she knew it was time to let nature take its course. She wanted that course to end at the place she loved most.

One who has seen the truth sees the self as independent from the body and death as the departure of the self from the body once the body can no longer sustain the self within it. Yoga is, among other things, preparation for death. And as death is the ultimate trip, set and setting are important: yogis aspire to leave their body in a sacred place, at an auspicious time, and in the company of yogis who’s presence and participation create an auspicious atmosphere, all of which help the yogi ascend to the highest destination upon departure from the body.

The decision to leave her body at Gita Nagari was a conscious and sober decision that Mother Kaulini was completely at peace with. Seeing that it would not be long before Mother Kaulini left her body, her adoptive family made the necessary arrangements.

Perhaps the only thing more glorious than the life of a self-realized sage is the death of a self-realized sage because, being free from the obligations of karma and samsara, they obtain pure spiritual life and are no longer obliged to take birth again. They may return to the material world for the sake of service but, if that’s the case, they return in a liberated state. Therefore, a yogi takes a pro-active role in preparing for death so that, rather than being a morbid or tragic thing, the departure from one’s body becomes a glorious and amazing thing.