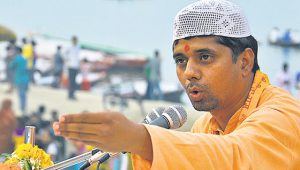 He is a kathavachak (narrator of religious lore) with a difference. A devout Muslim by birth, Faiz Khan is a firm believer in the need to protect cows.

The gau bhakt from Raipur has pitched tent, in a manner of speaking, at the old Assi ghat here and has become the centre of attraction in Varanasi. Though religious story-telling at the ghats was unheard of till now, he began reciting his katha here on March 23 coinciding with the Navratri festivities. The programme ended on Wednesday.

Faiz, who is reciting Gau Katha (parables on the cow), wants a ban on cow slaughter across the country.

“The cow is significant not only for Hindus but also for Muslims and all other Indians,” says Faiz Khan. But associating cow slaughter with any particular religion is not correct, he adds.

“For cow slaughter, all of us are equally responsible,” he feels. He also advocates formulation of a new law to ban cow slaughter and stern punishment for those violating it.

This cow bhakt has also demanded an immediate ban on the export of meat from India, which is the root cause of cow slaughter.

“The union government must formulate a separate ministry to check cow slaughter like the one for cleaning of the Ganga,” Faiz Khan says.

Girish Pankaj’s novel ‘Ek Gaay Ki Atmakatha’ became the turning point in Faiz Khan’s life. After reading the novel, he left his job of a lecturer at a government college in Raipur and embarked on a journey to recite Gau Katha.

Till date, Faiz Khan has recited many gau kathas all across the country.

Swami Swaroopanand Saraswati, the Shankaracharya of Dwarka and Jyotishpeeth, who is nowa-days in Varanasi at Sri Vidya Math, has applauded Faiz Khan’s efforts to save the cow and his Gau Kathas to raises awareness about the cow’s importance to mankind.