History shows that many Muslim artists have produced exquisite paintings of Krishna. Centuries after they were created, connoisseurs delight in these enchanting revelations of skill and artistry.

Since the first battle of Panipat, Indian art saw a significant infusion of Persian style and an Indo-Islamic period of art and architecture ensued. The Mughals were patrons of art.  With the exception of Aurangzeb (reign 1658–1707), they patronized Vedic art, although, ironically, they also destroyed many temples and the art inside them. After Aurangzeb, the Mughal Empire began to collapse. While historians attribute it to incompetent successors, the Vaishnavas insist that the decline was the repercussion of desecration of the Lord’s temples.

Persian artists Mir-Sayyid and Abd-us-Samad brought by Humayun influenced many local artists who took up their style, giving rise to the Mughal School of painting. Prior to that, the Islamic influence in art was primarily in the form of miniature paintings and manuscript illustrations but the content was uninspiring from a spiritual standpoint.

In the Mughal School, there was a considerable crossover between Vedic devotional themes and Persian style illustrations. After the Mughal Empire collapsed, Krishna leela scenes again proliferated in miniature works of artists under the patronage of non-Muslim states of Rajasthan, and from 1750 onwards, their work branched out into many wonderful schools of devotional art. 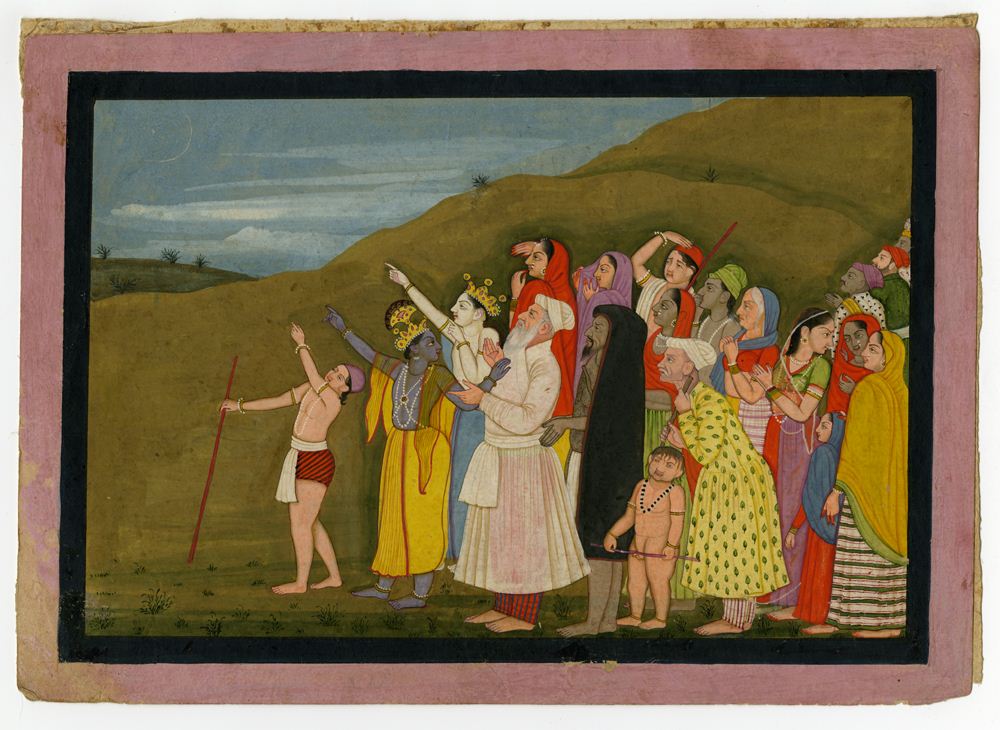 The Harivamsa Purana, documenting the pastimes of Krishna as a cowherd in Vrindavan, and comprising 16,374 verses, is considered a supplement to the Mahabharata, It was authored by Veda Vyasa sometime after he had completed the Mahabharata. In a Harivamsa illustration, where Krishna is shown lifting the Govardhana hill, one finds distinctive features similar in style to the many illustrations in Babur-nama, the biography of Babur.

Akbar (1556–1605) commissioned Miskin to do this painting. Completed in 1595, this painting depicts Krishna lifting Govardhana like a huge umbrella to protect his followers from the wrath of Indra who has conjured up a holocaust. Yet, the villagers and their herds, a depiction of sixteenth-century residents which includes the Muslims, are also in the painting. In another illustration from Harivamsa, this time depicting Lord Balarama’s killing of the demon Dhenuka, the patterned flowers in the decorative frame are entirely Persian in style. Also, the features of the animals and persons depicted have similarities with the illustrations in Babur-nama.

During Akbar’s reign, there was an effort to repair the social damage done by the Mughal invasion. He undertook a programme to translate many of the Vedic classics into Persian. These volumes were illustrated by his artists, and illustrations from Harivamsa were part of that work. The massive oeuvre of art in the Mughal times is brought into sharp focus by the artists. In a painting of Nur Muhammad, who was active as a painter in the seventeenth century, the churning of the Milk Ocean is beautifully depicted. In another painting, Wajid, who was active from 1680–1730, exquisitely depicts Krishna and Radha in a bower.

The Malwa region in Central India has a rich history of devotional art, and the influence of Islam can be seen in Vaishnava art here. The Malwa Sultanate (1392–1562) was an independent kingdom which was brought under the Mughal rule by Akbar in 1562. The paintings in this region, like all regions with Persian influence have figures with round faces, particularly at the chin. A manuscript leaf dated 1634 from the Rasikapriya) written in Brajbhasa by Keshavadasa, shows Radha and Krishna with very rounded faces.

An interesting comparison of styles can be found in another Malwa painting (of 1620) from that period. Here, Krishna is seated, holding a lotus while Radha stands nearby, addressing Him. Both have one hand in mudra (benediction). The scene is framed by trees with deer and monkeys. In the second painting, however, the painter has stayed true to the prevailing Indian style rather than carrying forward the Persian influence, with the rounded faces like those in the Rasikapriya illustration.

The paintings of Bikaner, a desert town in Rajasthan, had a lot of Persian influence in the depiction of trees in the eighteenth century. In the Megh-malhar scene, the Islamic painting style is palpable in the vertically-stacked rocks and round-edged stones found in the Mughal and Harivamsa paintings described earlier. The clouds (megh) in this scene also follow the Mughal style. In another Bikaner painting of Krishna, following the Persian style, the image of Krishna dancing with the cows is distinctly rounded. In the Megh-malahar painting, we also find the sort of angular faces typical of later Rajasthani paintings, even though the hills and clouds in this piece are distinctly Mughal.

The Bikaner artists maintained their love of Vaishnava themes, as did their contemporaries in Mewar. Eventually, there was a renaissance of Vaishnava dharma in Rajasthan, where Vallabhacharya propagated the bhakti movement. There was a renewed interest among artists in the north-west to depict scenes from Jayadev’s Geeta-Govinda, the Rasikapriya of Keshavadasa, and the Bhagavata Purana. Throughout many of these paintings, however, a subtle influence of the Persian style remained.

Bikaner is known for a hybrid style that incorporated influences from the Mughal art workshops, the remote Deccan, and the local Rajasthani style of painting. Part of the reason for this has to do with the fact that, in the early seventeenth century, due to the vicious proselytism practiced during the reign of Aurangzeb, the Mughal artists who hitherto exercised their style on Krishna-related themes could practice the art only in remote centres such as Bikaner. It is significant that in Bikaner, the most prominent artist was a Muslim named Hamid Ruknuddin.

Karan Singh (reign 1631–1669) summoned painters to his court. Among these, Ali Reza is mentioned in the Bikaner archives as an artist who had come to the state from Delhi. Hamid Ruknuddin was trained by Ali Reza. Ruknuddin was a master of colour and patterns. His chief work was a series of pictures illustrating the Rasikapriya in a dramatic action style. Many accomplished painters worked on the Krishna themes. However, the genre reached its apogee with Ruknuddin.

In a famous painting by Ruknuddin (below) dated 1678, Vishnu and Lakshmi are seen seated on a golden throne surrounded by eleven female attendants who minister to them. This is a polished work wherein the exquisitely-rendered folds of Vishnu’s robe, the fabrics of the assistants presenting gifts to the divine couple, and the subtle shading of the faces are reminiscent of Mughal paintings. This work is based on an important painting by Ali Reza. 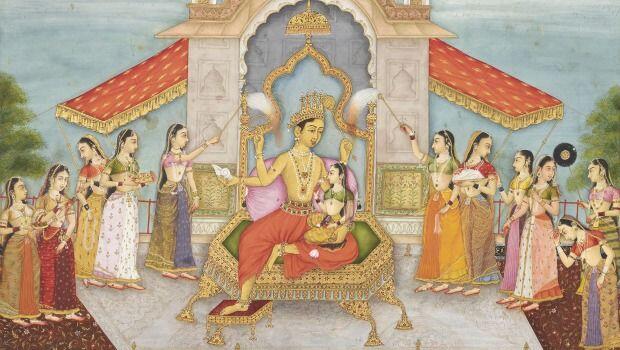 It seems probable that Ruknuddin, who produced this, and also a more delicate painting of Vishnu and Lakshmi approximately thirty years later, might have learnt much from the older artist. The Vishnu and Lakshmi composition gives an indication of Ruknuddin’s highly-precise, detailed style. Pictures of Vishnu and his consort Lakshmi were popular in the Bikaner ateliers. It appears that they were based on a prototype from 1650 by Ali Reza on which an inscription relates that the piece illustrates a dream of Karan Singh. Ruknuddin’s version adopted Ali Reza’s scene, but situated the scene on a terrace. In another painting, Ruknuddin depicts Lord Rama and his army of monkeys and bears attacking the army of Ravana and his demons.

Ruknuddin’s career in the atelier of Bikaner lasted almost fifty years. A ragini leaf dated 1646 seems to be his earliest documented work and his last work appears to be a Krishna painting in about 1697. The archival records of Bikaner list numerous paintings of his which are unidentifiable today. From these records, it is also known that Ruknuddin’s sons succeeded him.

One of Ruknuddin’s sons, Shahibdin painted one of the finest Bikaner paintings—Krisna lifting Govardhana. In this painting, Krisna holds up Govardhana, providing shelter to the cowherds threatened by a cosmic downpour instigated by Indra. Semi-transparent clouds cover the mountain peaks. Indra on his elephant looks on. Shepherds and cowherds look in wonderment, while the cows graze.

The exquisite use of bright colours, details of landscape and the treatment of cattle are influenced by the Deccani style of Golkonda which came through Prince Anup Singh from Bikaner who served in the Deccan and acquired a fine collection of paintings. Ruknuddin accompanied Anup Singh on his military campaigns to the Deccan, as part of a contractual service to the Mughal court.

Under Rana Pratap Singh (1572–1597) and his son Rana Amar Singh (1597–1620), a poetic style of painting seems to have thrived in the Rajput state of Mewar. A Muslim artist by the name Nasiruddin was known to be active in this court between 1585 and 1609, and it is also documented that he returned to Udaipur thereafter. He was known primarily for his illustrations in the Ragamala manuscript dated April 10, 1605, as understood from the inscriptions. It is believed to have had a link with the Mewar township of Chawand. He worked in a style already familiar in the Rajput tradition. Distinct similarities could be seen with the paintings in the Rajput courts in the early sixteenth century and Nasiruddin’s paintings.

In an illustration to the Rasikapriya, a sakhi is shown embracing her companion in the doorway of a palace while gesturing towards her lover Krishna who stands behind a plantain tree. This was created by Shahibdin in 1650 in Mewar, and clearly shows his distinctive style. He was the most innovative artists in Mewar during the second quarter of the seventeenth century. He worked on several illustrations of the Rasikapriya series. These works are verse-specific and interweave visual elements while retaining the literary flavour of the text. The illustrations maintain the spiritual and aesthetic harmony of Krishna and Radha as archetypal lovers.