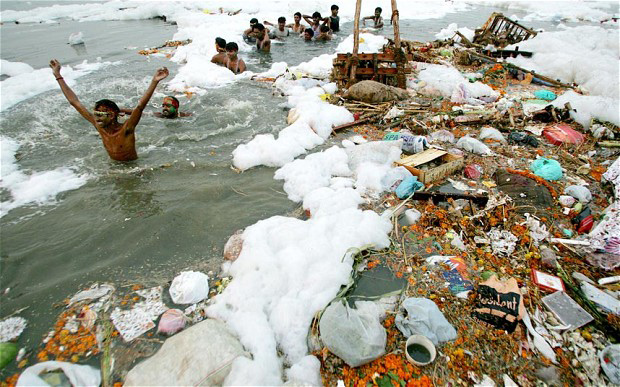 London is to help India revive Delhi's Yamuna River, once revered as one of the country's most sacred waterways but now regarded as toxic and lethal by environmentalists.

While its waters are from pure Himalayan glaciers, by the time it reaches the capital Delhi the Yamuna is a 'dead' river which passes millions of tons of chemical waste, sewage and industrial pollutants downstream to Agra, the home of the Taj Mahal.

Indian officials believe they can learn from efforts to revive the Thames, which was also declared dead 55 years ago but was recently hailed an environmental success story and is once again a breeding ground for fish and bird life.
London Mayor Boris Johnson offered British help to clean up and revive the Yamuna at a meeting with Delhi's chief minister Sheila Dikshit, who said she believes the Thames model could bring Delhi's main waterway back to life.
India has spent almost £200 million on unsuccessful schemes to clean the river, which is revered by Hindus for saving Lord Krishna from a murderous uncle by parting its waters to allow them to flee. None however have had any impact. Two thirds of Delhi's 600 million gallons of sewage is dumped in the river every day, but few of the capital's water treatment plants are in operation, which means much of the waste flows slowly and fragrantly through the city.