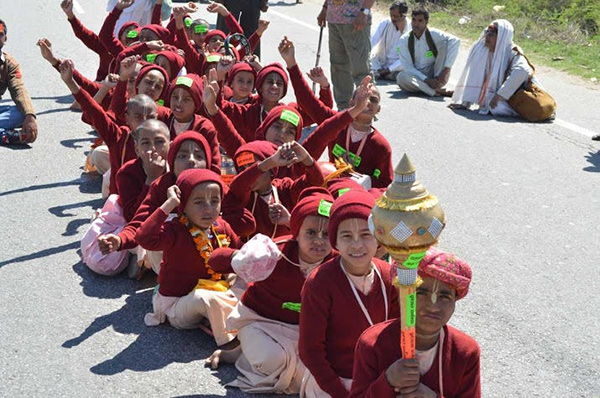 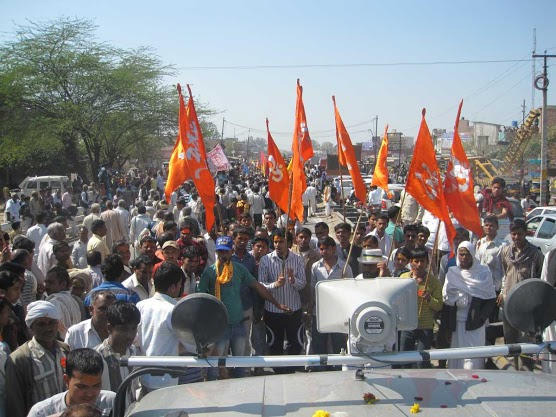 Hectic preparations had already begun around 26th Feb as unexpected participants began arriving as early as 26th.Thousands of Farmers of Bhartiya Kisaan Union started pouring in since early morning at a bid open space near the famous Garun Govind Temple. Around 3 0′ clock the venue was packed with around 30 to 40000 thousand participants which included mostly devotees, farmers and local Brajwasis.
Seated on the stage were HH Keshavchandra Maharaaj, HH Cheenu Baba Maharaaj and was later joined by Shri Ramesh Baba Maharaaj of Maan Mandir, Barasana. Several speeches were made: spiritual, environmental, charging and emotionally arousing. Then several leaders of Farmers Union took over the stage and addressed the participants in more rustic ways.

The local towns of Vrindavan & Mathura had declared their commercial establishments shut for the day as a mark of support to the Yatra. Temples also shut darshan for the day. This day several thousand Brajwasis came out in support. They came to the venue and joined the protest. Several speeches were made by local leaders. Politicians, social leaders, representatives of various sections of the society spoke of their contributions to the cause. The PadYatra left the venue in several organized bathces and durations. Leading all were the young sadhus of Maan Mandir followed by Hari Naam singing sadhikaas of Maan Mandir. Next were devotees of Iskcon coming from Vrindavan and Delhi Temples. Following closely were Thousands of Pusti Maarg Devotees hailing from various towns and villages of the state of Gujarat. They were lead by their Revered Achaaryaas. They were ecstatic and sang Hari Naam, Braj Folk Keertans and had a festive mood all along. They were followed by some Local Brajwasis coming from various villages. Following them were 18 batches of Thousands of Farmers from various parts of the Country. They had their own keertan / music etc.

The National Highway was blocked for the PadYatra on one side and traffic managed on the other. The Yatra finally reached Chomuha around 12 kilometers from the start point. However, there were around 2500 still waiting on the start side to move.

The Government approached the core team of the Yatra. The officials from New Delhi had come from various departments of the Government. They had nothing to offer but false hopes that had no substance. On being snubbed for their lack luster offer, there was no progress and the core team members pressed on with the Yatra.

The Yatra began around 8:30 AM. There was a reduction in the number of Farmers but a sudden increase in the number of Brajwasis that joined in. The second day saw a better management of affairs. Many Local villages on the way played Host to the Yatra. The same pattern continued through the day and the Yatra ended around 2 o clock in Chaata.

This day the number of Farmers decreased but the Brajwasi turnout was immense. Local people of Chaata came out in big support. The event was beginning to get big media attention. Several spiritual leaders addressed the participants. On reaching Kosi outskirts, the Yatra was received by a huge crowd of at least 15000 people. It was a festival like atmosphere with a lot of Keertan, dancing and merry making. The town of Kosi had declared a Holiday. All sections of the society came out in support. The festivities continued till evening. Shri Ramesh Baba Maharaaj addressed the crowd with a huge response. Several local political leaders, spiritual personalities and social groups addressed the participants. This was followed by delicious prashaadam.

The Yatra left as usual. Around 12 PM, Uma Bhaarti a big political leader arrived and addressed the crowd. There was a massive crowd build up by then. Shri Ramesh Baba also addressed the participants. On day 4, the mix of participants had changed with mostly Brajwasis and devotees staying behind. The Yatra crossed over into the state of Haryana and arrived at Hodal Town. It was received by a crowd of around 12000 people. A local Youth activist group, a local leader and thousands of people of Maan Mandir Hari Naam Sankeertan group received the Yatra with great anxiety and festivities.

The schedule of the Protest March: