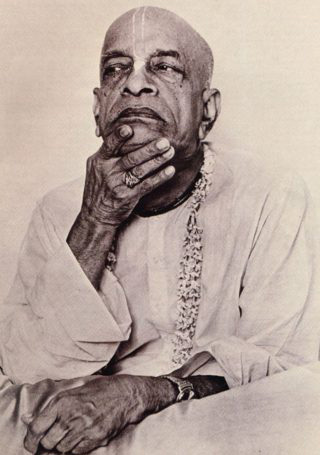 According to Vedic civilization, the perfection of life is to realize one's relationship with Krsna or God. In Bhagavad-gita, which is accepted by all authorities in transcendental science as the basis of all Vedic knowledge, we understand that not only human beings but all living entities are parts and parcels of God. The parts are meant for serving the whole, just as the legs, hands, fingers and ears are meant for serving the total body. We living entities, being parts and parcels of God, are duty bound to serve Him.

According to Vedic civilization, the perfection of life is to realize one's relationship with Krsna or God. In Bhagavad-gita, which is accepted by all authorities in transcendental science as the basis of all Vedic knowledge, we understand that not only human beings but all living entities are parts and parcels of God. The parts are meant for serving the whole, just as the legs, hands, fingers and ears are meant for serving the total body. We living entities, being parts and parcels of God, are duty bound to serve Him.

Actually our position is that we are always rendering service to someone, either to our family, country or society. If we have no one to serve, sometimes we keep a pet cat or dog and render service to it. All these factors prove that we are constitutionally meant to render service, yet in spite of serving to our best capacity, we are no more satisfied. Nor is the person to whom we are rendering that service satisfied. On the material platform, everyone is frustrated. The reason for this is that the service which is being rendered is not properly directed. For example, if we want to render service to a tree, we must water the root. If we pour water on the leaves, branches and twigs, there is little benefit. If the Supreme Personality of Godhead is served, all other parts and parcels will be automatically satisfied. Consequently all welfare activities as well as service to society, family and nation are realized by serving the Supreme Personality of Godhead.

It is the duty of every human being to understand his constitutional position with God and to act accordingly. If this is possible, then our lives become successful. Sometimes, however, we feel challenging and say, "There is no God," or "I am God," or even, "I don't care for God." But in actuality this challenging spirit will not save us. God is there, and we can see Him at every moment. If we deny seeing God in our life, then He will be present before us as cruel death If we do not choose to see Him in one feature, we will see Him in another. There are different features of the Supreme Personality of Godhead because He is the original root of the entire cosmic manifestation. In one sense, it is not possible for us to escape Him.

We must always remember that this particular form of human life is attained after an evolution of many millions of years in the cycle of transmigration of the spirit soul. In this particular form of life, the economic question is more easily solved than in the lower animal forms. There are swine, dogs, camels, asses and so on whose economic necessities are just as important as ours, but the economic questions of these animals and others are solved under primitive conditions, whereas the human being is given all the facilities of leading a comfortable life by the laws of nature.

Why is a man given a better chance to live than swine or other animals? Why is a highly posted government officer given better facilities for a comfortable life than an ordinary clerk? The answer is very simple: the important officer has to discharge duties of a more responsible nature than those of an ordinary clerk. Similarly, the human being has to discharge higher duties than the animals, who are always busy with filling their hungry stomachs. But by the laws of nature, the modern animalistic standard of civilization has only increased the problems of filling the stomach. When we approach some of these polished animals for spiritual life, they say that they only want to work for the satisfaction of their stomachs and that there is no necessity of inquiring about the Godhead. Yet despite their eagerness to work hard, there is always the question of unemployment and so many other impediments incurred by the laws of nature. Despite this, they still denounce the necessity of acknowledging the Godhead.

We're not given this human form of life just to work hard like the swine or dog, but to attain the highest perfection of life If we do not want that perfection, then we will have to work very hard, for we will be forced to by the laws of nature. In the closing days of Kali-yuga (this present age) men will have to work hard like asses for only a scrap of bread. This process has already begun, and every year the necessity for harder work for lesser wages will increase. Yet human beings are not meant to work hard like animals, and if a man fails to discharge his duties as a human being, he is forced to transmigrate to the lower species of life by the laws of nature. Bhagavad-gita very vividly describes how a spirit soul, by the laws of nature, takes his birth and gets a suitable body and sense organs for enjoying matter in the material world.

In Bhagavad-gita it is also stated that those who attempt but do not complete the path of approaching God, in other words, those who have failed to achieve complete success in Krsna consciousness, are given the chance to appear in the families of the spiritually advanced or in financially well-to-do mercantile families. If the unsuccessful spiritual aspirants are offered such chances of noble parentage, what of those who have actually attained the required success? Therefore an attempt to go back to Godhead, even if half finished, guarantees a good birth in the next life. Both the spiritual and financially well-to-do families are beneficial for spiritual progress because in both families one can get a good chance to make further progress from the point where he stopped in his previous birth. In spiritual realization the atmosphere generated by a good family is favorable for the cultivation of spiritual knowledge. Bhagavad-gita reminds such fortunate well-born persons that their good fortune is due to their past devotional activities. Unfortunately the children of these families do not consult Bhagavad-gita, being misguided by maya (illusion).

Birth in a well-to-do family solves the problem of having to find sufficient food from the beginning of life, and later a comparatively easier and more comfortable way of life can be led. Being so situated, one has a good chance to make progress in spiritual realization, but as ill luck would have it, due to the influence of the present iron age (which is full of machines and mechanical people) the sons of the wealthy are misguided for sense enjoyment, and they forget the good chance they have for spiritual enlightenment. Therefore nature, by her laws, is setting fires in these golden homes. It was the golden city of Lanka, under the regime of the demonic Ravana, that was burned to ashes. That is the law of nature.

The Bhagavad-gita is the preliminary study of the transcendental science of Krsna consciousness, and it is the duty of all responsible heads of state to chalk out their economic and other programs by referring to Bhagavad-gita. We are not meant to solve economic questions of life by balancing on a tottering platform, but we are meant to solve the ultimate problems of life which arise due to the laws of nature. Civilization is static unless there is spiritual movement. The soul moves the body, and the living body moves the world. We are concerned about the body, but we have no knowledge of the spirit that is moving that body. Without the spirit, the body is motionless or dead.

The human body is an excellent vehicle by which we can reach eternal life. It is a rare and very important boat for crossing over the ocean of nescience which is material existence. On this boat there is the service of an expert boatman, the spiritual master. By divine grace, the boat plies the water in a favorable wind. With all these auspicious factors, who would not take the opportunity to cross over the ocean of nescience? If one neglects this good chance, it should be known that he is simply committing suicide.

There is certainly a great deal of comfort in the first-class coach of a train, but if the train does not move toward its destination, what is the benefit of an air-conditioned compartment? Contemporary civilization is much too concerned with making the material body comfortable. No one has information of the real destination of life, which is to go back to Godhead. We must not remain seated in a comfortable compartment, but we should see whether or not our vehicle is moving toward its real destination. There is no ultimate benefit in making the material body comfortable at the expense of forgetting the prime necessity of life, which is to regain our lost spiritual identity. The boat of human life is constructed in such a way that it must move toward a spiritual destination. Unfortunately this body is anchored to mundane consciousness by five strong chains which are: (1) attachment to the material body due to ignorance of spiritual facts, (2) attachment to kinsmen due to bodily relations, (3) attachment to the land of birth and to material possessions such as house, furniture, estates, property, business papers, etc., (4) attachment to material science, which always remains mysterious for want of spiritual light, and (5) attachment to religious forms and holy rituals without knowing the Personality of Godhead or His devotees who make them holy. These attachments, which anchor the boat of the human body, are explained in detail in the Fifteenth Chapter of Bhagavad-gita. There they are compared to a deeply rooted banyan tree which is ever increasing its hold on the earth. It is very difficult to uproot such a strong banyan tree, but the Lord recommends the following process: "The real form of this tree cannot be perceived in this world. No one can understand where it ends, where it begins, or where its foundation is. But with determination one must cut down this tree with the weapon of detachment. So doing, one must seek that place form which, having once gone, one never returns, and there surrender to that Supreme Personality of Godhead from whom everything has begun and in whom everything is abiding since time immemorial." (Bg. 15.3-4)