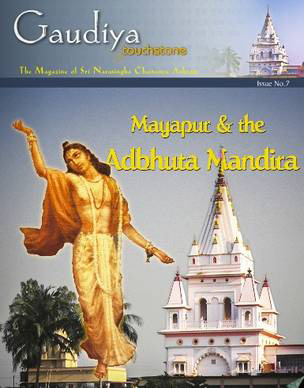 The 7th issue of Gaudiya Touchstone http://gaudiyatouchstone.net commemorates the advent of Sri Chaitanya Mahaprabhu, which falls this year on March 16th 2014, so in this edition we have many articles glorifying Mahaprabhu and the sankirtana movement.

We have two unique articles translated for the first time in English – Dharma and the Modern World by A.C. Bhaktivedanta Swami Prabhupada, and Agun Jalbe by Swami B.R. Sridhara Maharaja. We also have Gaura-Gopala Prashasti, a Bengali composition by Swami B.P. Puri Maharaja glorifying the pastimes of Lord Chaitanya and Lord Krishna.

Bhaktisiddhanta Saraswati Thakura explains to us what is the true nature of the worship of Mahaprabhu in Saraswati Samlapa, an article originally published in The Gaudiya magazine in 1929.

Our excerpt from Bhagavad-gita, Jnana-Vijnana Yoga deals particularly with the elusive Dark Matter that modern science is currently searching for, and Rasaraja-Mahabhava explains the ontological meaning of the title ‘Mahaprabhu’.

Our cover story is Mayapur and the Adbhuta-Mandir – a controversial topic that details with the history of the whereabouts of Mahaprabhu’s birthplace and the prediction of the construction of an adbhuta-mandir (wonderful temple). This is followed by another article, The Adbhuta Mandir that goes into more detail about this topic.

In Himalayan Pilgrimage Part 2, Swami Giri and Gaura Gopala conclude their journey to the sacred temples of the Himalayas, which ends in the tragic floods that killed thousands of people a week later. The article is followed by a photo spread of stunning pictures of the Garhwal region.

Temples of Karnataka by Rasikananda focuses on the 12th Century Lakshmi-Narayana Temple in Hosaholalu, and Swami Vishnu gives an overview of the achievements of Ancient India and explains the true history of India in From Mythology to History.

Robert Lanza asks the poignant question, What is it Like After You Die? – an article that postulates that death ultimately doesn’t exist. We then raise the question in the next article, Who is Robert Lanza? and give a brief biography of this famous scientist who has coined the phrase and concept of ‘biocentrism.’

In Traces of Vaishnavism in Early Art, artist Dominique Amendola takes us through Indian history and around the Subcontinent tracing the very beginnings of Vaishnava iconography and art.

This issue’s Words of Wisdom is taken from the famous epic, The Mahabharata, and stresses the importance of virtue.

Apart from designing Gaudiya Touchstone, our designer, Rasikananda, is also an accomplished cook. He tells us the secret how to make one of the tastiest sweets in India, the Manohar laddu.

So there you have it for Issue 7. Have a happy and auspicious Gaura Purnima festival!