For a hundred years this elegant American elm at the center of Tompkins Square Park was just a tree. Then, in 1966, the Hare Krishna mantra was chanted under its sprawling canopy for the first time, and it became the birthplace of a religion.

To Hare Krishnas this tree is a sacred site. For everyone else it would be easy to stroll by the old elm in Manhattan’s East Village and have no idea it’s a religious landmark. It’s a handsome tree — American elms are quite rare now, known for their wide-stretching canopies — but otherwise inconspicuous. But if you happened to wander by on October 9, 1966, you would have heard the “Hare Krishna” mantra chanted publicly for the first time outside of India, marking the birth of the spiritual movement in the West.

At the base of the tree, Bhaktivedanta Swami Prabhupada and a group of robed followers spent two hours chanting, dancing, playing tambourines and cymbals, and seeking Krishna — a pure and blissful consciousness. Among them was Beatnik poet Allen Ginsberg, who was living nearby. He later wrote, “The ecstasy of chant or mantra has replaced LSD and other drugs for many of the swami’s followers.”

At the time, lower Manhattan was the epicenter of bohemian counterculture, the Haight Ashbury of the East Coast. Hippies flowed into Tompkins Square Park, which has long been both a neighborhood respite and a symbol of subversion, where activists staged anti-war protests and women marched for liberation. Not long after the Swami first sang Hare Krishna under the old elm tree, legends like Jimi Hendrix and the Grateful Dead played at the park’s new bandshell. 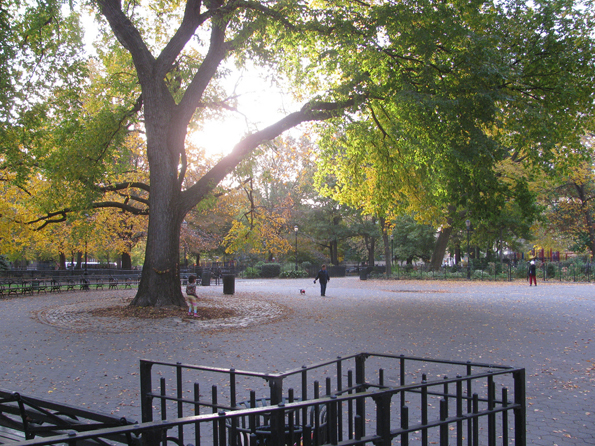 If you venture a few blocks from the park you’ll find 26 Second Avenue, where Swami Prabhupada founded the International Society for Krishna Consciousness. He rented a storefront that would serve as both the religious movement’s headquarters and a Hare Krishna temple. Amazingly, the temple remains there today, next to a vintage boutique.