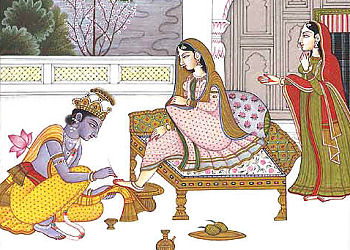 The yoga tradition of Sri Caitanya with its emphasis on shakti, the feminine power, among other things, played a major role in uplifting the position of women in what was a largely patriarchal society. No doubt this social upliftment was fueled in part by the role of the feminine in transcendence envisioned by Sri Caitanya. Women in today’s society may thus be encouraged both in their social struggle for equality and in their spiritual struggle for enlightenment to learn of his ideal, even when gender distinctions in transcendence are categorically different from our material gender distinctions.

While material gender distinctions are based upon the soul’s misidentification with matter, causing one to misconstrue one’s self to be a woman or man, the spiritual gender distinction of Sri Caitanya lies in acknowledging the subtle difference between that which constitutes power (shakti) and that which constitutes the powerful (shaktiman). The two are experienced as simultaneously one and different, an experience that transcends logic. When viewed through the philosophical eye of yoga they are one, but when viewed through the yogic eyes of devotional ecstasy they are two, Radha and Krishna. They are one soul in two bodies dancing in divine play. Radha is the personified feminine aspect of Sri Caitanya’s deity and Krishna is the personified male aspect.

In one sense the feminine aspect of this divine dyad is more important to us, closer to us. In the Vaishnava schools of devotional yoga where devotion is not only the means but the goal as well, materially embodied souls like ourselves are considered feminine in nature regardless of the bodily dress we wear in this world. We are, that is, an expression of the shakti aspect of the divine couple. In this sense we are closer in constitution to Radha than we are to Krishna. She is our source.

Whereas Krishna is the deity of divine love—perfect love’s object—Radha personifies perfect love itself. Thus she is not only our deity, being one aspect of the divine dyad, but moreover she is also our ideal of devotion. Without an example of the ideal, a role model to follow, theory alone is not that helpful. Yogeshvara, “Master of Yoga,” as Krishna is addressed in the Bhagavad-gita, only teaches the theory of bhakti-yoga, but it is Radha who teaches it by her example and personifies the perfection of devotion. She does so within the divine lila, play, and furthermore it is her shakti that empowers our earthly teacher and example, the guru.

Thus relative to the bhakti yoga practitioner, Radha’s position is more important than Krishna’s. However, even if we view her position from the absolute vantage point—through the lotus eyes of Krishna—her position is hardly diminished. After all, in Sri Caitanya’s vision, Krishna has fallen in love with Radha, and while the greater yogic world bends its knees to Krishna, Krishna has become weak in the knees at the mere mention of Radha’s name! While the yogic community idolizes Krishna for good reason, the bhakti yoga of Sri Caitanya is preoccupied with Krishna’s idol—Radha. Welcome to the land of love that knows no reason.

Krishna means “irresistible.” Rama the immediate other self Balarama, Krishna’s elder brother in his pastoral lila. Hare is the vocative for Hari, which means “he who takes away.” All of these are names for Krishna, to whom the mantra calls out—“O Hari, O Krishna, O Rama! However, Hare is also the vocative of Hara, a name for Krishna’s shakti, Radha. Understood in this way, Hare means she who steals away the heart of he who is irresistible, the connoisseur of divine romantic love, and in this conceptual orientation to the maha mantra the Rama is taken as another name of Krsna: “one expert in divine romantic love.” Thus this simple mantra of divine names takes one deep within the yogic world of divine love where shakti rules over shaktiman. It seeks to unite Radha and Krishna in love within their divine play, and in doing so facilitates the chanter’s prospect for following Radha and falling in love with Krishna, who has fallen in love with her.