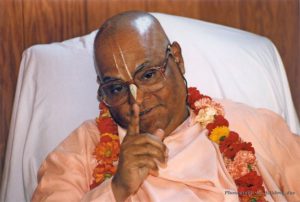 Devotee: Srila Prabhupada always emphasized that he was eternally present in his books, instructions, tapes, and letters. So when you say we should take association of a sadhu can we do that through Srila Prabhupada’s books?
Present in His Books

Gour Govinda Swami: If Prabhupada says he is there, then you try to see him, associate with him and listen from him. Do you see Prabhupada? Is he speaking to you?

Devotee: Through his books.

Gour Govinda Swami: Through his books, yes. All sadhus speak through their books. Jiva Goswami, Rupa Goswami, Sanatana Goswami, Bhaktivinoda Thakur, Bhaktisiddhanta Sarasvati and Srila Prabhupada all say that they speak through books.

This is not a new thing. This is our vaisnava procedure. But you should see him. Can you see Bhaktivinode Thakur? Can you see Jiva Goswami ? You may say, “Oh I have read their books, I have their association.” That won’t help you. You cannot understand what they have said merely by reading their books.Your consciousness is very low, so you cannot understand their words. They are very, very merciful, but you should follow the proper path. If you are intelligent you will understand how they are still here, not only in the form of their books but also they are here. You should see them. Why are you thinking so foolishly? So many books were already there, so why has Srila Prabhupada said this? You are thinking, “We need only to read books. There is no need of association with a sadhu who is physically present. Is there any sadhu? No, there is no sadhu at all.”

Your motto is, “Seeing is believing.” You cannot see, so you cannot believe. Because you are a conditioned soul your vision is defective. You cannot see a sadhu.

Krsna is there, can you see him? No, you cannot, because you are not endowed with proper vision. First develop the proper vision and then you can see Krsna. Then you can see how a sadhu is there. It is not a fact that sadhus are not present. How is everything going on? How does the sun rise, the wind blow, and Indra give rain? All these things are going on. No sadhu? No Krsna? It’s nonsense, foolishness. We are so proud and puffed up. We are indentifying our self as the body, mind and false ego. We think we are very great. So we say “Oh there is no sadhu.” We are in the category of identification with the body and mind. We have not come to the beginning of the stage of purity. No!

Devotee: So we have to associate with a living sadhu?

Gour Govinda Swami: Definitely. There is always one there. But he is not a cheap person. Such a person is very rare. If you can get his mercy then you can see him. Otherwise, by your own effort and perception you cannot see him. No, no, no.

Devotee: How are we seen by the sadhu by our service?

Gour Govinda Swami: Yes. The sadhu is the seer. If he showers his mercy upon you, he sees you. If you receive that merciful glance then you are very fortunate. However, you are in the category of bodily consciousness. How can you have it?

Guru is the manifestation of the Supersoul, caitya-guru in the heart. He manifests a body and appears. He knows your heart.

Devotee: I don’t quite understand.

Gour Govinda Swami: Yes, try to understand. As I told you, just hear patiently. A new bhakta cannot understand it because it is a topic of the highest class. You are in pre-primary class, how can you understand? You are not even in the primary class. How can you understand this topic of the highest class? Just accept the bona fide authorities. That will help you. The teacher says, “Two plus two is four.” The primary school student accepts it. If the teacher asks the child, “What is two plus two?” The child will reply, “Two plus two is four.” “Why is two plus two four?” ” My teacher says.” He will answer like this. That means he has accepted authority. This is the only principle in the beginning. How is two plus two four? Why not three or five? That will be explained in a higher mathematics class, not in the beginning. You have to have patience and get a promotion. My guru maharaj says in his purport that the beginning is purity of consciousness. First come to this beginning stage, then gradually other things will come up. You are not in the beginning stage so how will the higher topics come up? This is a very, very subtle and very deep philosophy.

Unless you get association with a living sadhu, what can you do? Will you put some question to Srila Prabhupada and Srila Prabhupada will answer you? This process is a living thing, it is always there, it is always current. It is not that inquiry was done a certain way in the past and now things are done differently. No! It is an eternal process, pranipatena pariprasnena sevaya.