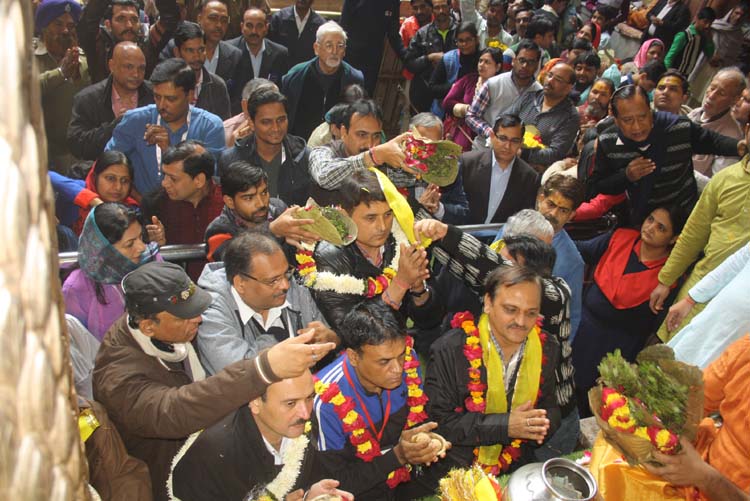 The Tourism Department of Uttar Pradesh has approved a separate tourism police service for Vrindavan.

The tourism police are being deployed in three of Vrindavan’s major temples: Banke Bihari, Krishna Balaram, and Prem Mandir. Altogether, Vrindavan gets nine tourism police personnel equally distributed among these three temples. The number of tourism police stationed in Vrindavan may go up in the future as its services may be required in other temples too.

Given that Vrindavan is not just an important pilgrimage destination but attracts a large number of international visitors, the tourist police assume importance. Many VIP’s including ministers, top bureaucrats, celebrities and the political leaders are also frequent visitors to the town. The tourism police will have an important role to play in giving them safe passage for darshan in the crowded temples.

According to Shri Anupam Shrivastava, the District Tourism Officer, a tourism police center will be built in front of “Mayawati’s” hospital, a.k.a. “the hundred bedded” government hospital near the Pagal Baba temple. An officer of the inspector rank will be placed in charge of the Tourism Police Centre.

Shri Shrivastava said, “Tourists face problems of transport, accommodation, information and are vulnerable to cheats and touts. So, it was decided that a special tourist police squad shall be deployed in the major temples of Vrindavan.”

The establishment of the tourist thana (precinct) remained pending for seven years. It was first proposed in 2008 in the Vrindavan Development Plan package. The then Mayavati government announced Rs. 350 crore for Vrindavan development. Establishing a Tourism Police Centre was one of the projects sanctioned under the plan. The MVDA had even identified a land for it near the Raman Reti Police Chowki, but the thana was never built under that plan.

Shri Ram Narayan Brajwasi, Vice-President of the Brajwasi Tirtha Purohit Panda Sabha, stressed the need of establishing Information Centers, where a proper guide book will be made available. Such information centers could be established near the Iskcon temple, Banke Bihari, the bus stand, or Pagal Baba Mandir.

“The visitors should know that there are many more important and interesting temples in Vrindavan, each having its own heritage and cultural values. They should know about the ghats, the water bodies and sacred groves of Vrindavan too. A handbook should be given to tourists giving all the details of the places to visit in Vrindavan. The handbook should be made available with the tourism police personnel deputed in the various temples of the temple town,” said Shri Brajwasi.