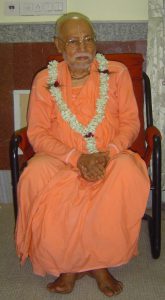 In the pastimes of Supreme Lord Sri Ramchandra all the rasas (mellow) up to vatsalya ras (parental affection) is exhibited. However, due to moral codes having the highest priority in these pastimes, the mood of parental affection has a restricted nature. Maharaj Dasrath established these codes, so he was unable to prevent Sri Ramchandra from going to the forest. To exemplify these codes, Sri Ramchandra accepted exile in the forest to uphold a promise that his father had made.

Sri Ramchandra vowed to accept only one wife –‘Eka patni vrat dhar.’ Therefore, no one else can worship Him as a husband. Kant-ras (conjugal mood) is not exhibited in these pastimes. When the sages of Dandkaranya desired to have Sri Ramchandra as their husband, He told them to achieve conjugal bliss by paying allegiance to the gopis in His pastimes as Krishna.