Transcendental Journey will repeat twice, with a matinee performance at 2pm and an evening one at 7:30pm in one of the Sydney Opera House’s state-of-the art theaters, “The Studio.” With sophisticated sound and lighting systems, its comfortable crimson-red tiered seats will sit 350 each time for a total of 700.

Organizers hope that about thirty per cent of the audience will be members of the general public attracted by a high-quality show, while ISKCON devotees and the wider Indian congregation will make up the rest.

VIPs such as the Prime Minister of Australia Mr. Michael Turnbull and High Commissioner of India in Australia Mr. Navdeep Suri are being invited, along with other senior politicians and famous actors and musicians.

One of Srila Prabhupada’s seniormost disciples and most renowned ISKCON pioneers, Mukunda Goswami, is expected to attend, health permitting. Australian kirtan singer Sri Prahlad Das has confirmed. And ISKCON gurus Radhanath Swami and Bhaktimarga Swami, as well as GBCs for Australia Ramai Swami and Devamrita Swami, are also being invited.

Like the Academy Awards, the 90-minute show will use video on a large screen to link live music, dance, and drama performances, all combining to tell the story of Srila Prabhupada’s life and the development of the Hare Krishna Movement — from its cultural roots 5,000 years ago up to the diversity and unity that is ISKCON today. 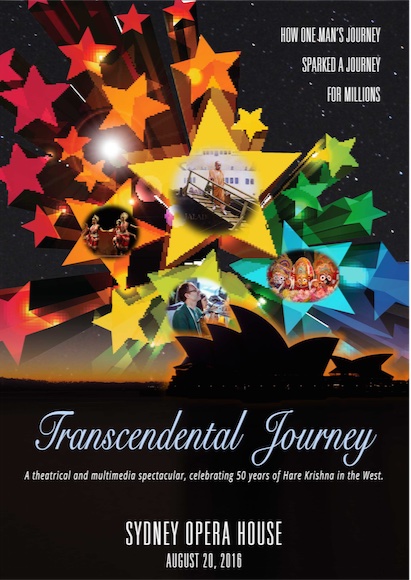 “One of the opening scenes will feature an actor as Srila Prabhupada, walking up the gangway onto the steamship Jaladuta to travel from India to the U.S.,” says producer Damodara Pandit Das. “Video explaining that Srila Prabhupada was an emissary in the Gaudiya Vaishnava line, going back to Sri Chaitanya, will then connect to a Bengali kirtan performance.”

Next, the story will follow Chaitanya Mahaprabhu to Orissa, presenting a traditional Odissi dance by the Naktya Shakti Dance troupe from the New Govardhana Farm in New South Wales.

After a Rasa-Lila dance in Lord Krishna’s hometown of Vrindavana, India, the story will return to Srila Prabhupada as he arrives in America. Highlights there, such as the beginning of ISKCON at 26 2nd Avenue in New York City, and the kirtan Prabhupada led on San Francisco’s Hippie Hill in 1966, will be portrayed by actors and musicians.

“We’ll also have scenes looking at ISKCON’s achievements and where it is today, as well as ISKCON’s younger generations and its future,” says Damodara Pandit. “The show will end with a grand finale kirtan, which we hope to get everyone up and dancing for!”

After the performance, audience members will be able to browse Srila Prabhupada’s books in the foyer. There will also be a commemorative program for the event.

The team also plans to livestream Transcendental Journey: Krishna 50 Years On, and to make a CD and DVD of the event.

The show will be part of a weekend retreat at Govinda Valley, an ISKCON yoga center just south of Sydney. The retreat will include ecstatic kirtans, classes, feasting, Srila Prabhupada remembrances by his disciples, and a mega Harinama in downtown Sydney.

“Our goal in holding this event is to increase the appreciation and profile of Srila Prabhupada and his ISKCON movement,” says Damodara Pandit.

Artists who are interested in being a part of the Transcendental Journey show are invited to contact Damodara Pandit Das at yakdas@hotmail.com