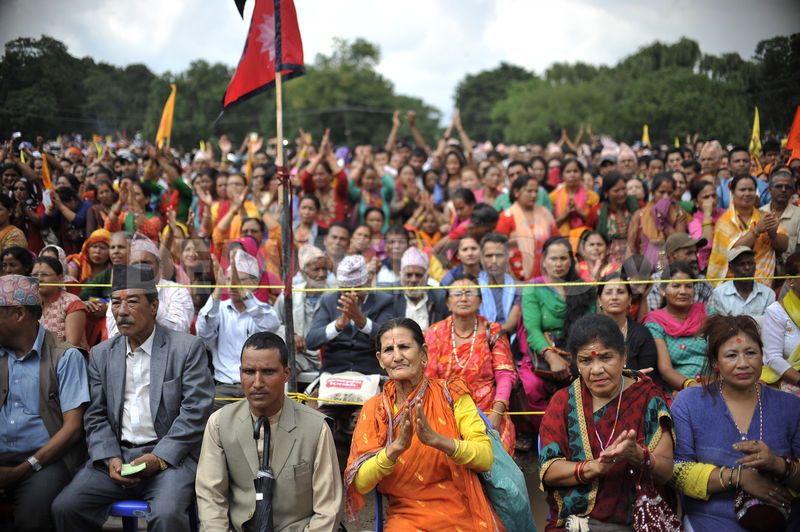 Thousands assembled. It took a shape of an ocean. Hindu saints, intellectuals, activists, women folk, youth, aged, commoners all converged in in one place in the capital of Nepal, Kathmandu. Demanding Nepal to be reinstated as a Hindu state a huge mass gathering was organized on August 7 at Khullamanch. The ‘Birat Dharma Sabha’ saw an impressive turnout of Hindu people against secular menace an anti Hindu conspiracy in Nepal, which made a record in the history of congregations in Nepal in recent times.

“Declaring a predominantly Hindu country a secular state would hurt the sentiments of many,” said one of the speakers addressing the gathering. “We participated in the people’s movement to get a nation that was truly ours and not a country in which we are forced to convert to another religion,” he added. Comments were made on the rise in the number of individuals converting to other religions. Religious leaders present at the gathering urged the audience to take up the issue with seriousness and press the Constituent Assembly to amend the provision on religion in the draft constitution.

The speakers in this historic Hindu confluence demand Hindu Rashtra in Nepal,  religious freedom without conversion, total ban on stealthy cow slaughter, honor to Hindu Kingdom in Nepal and protection of Sanskrit and Vedic culture in Nepal. A strong retaliation came up in the congregation against the ‘Christian Conversion’ and the probable Islamic aggression in Nepal.

WE WANT HINDU RASHTRA IN NEPAL

Enthusiastic supporters thronged the venue carrying National flag of Nepal, saffron and yellow flags with the symbol of Omkar. The Participants were carrying posters and banners demanding Hindu Rashtra as their ultimate goal. The gathering had thrown Valley traffic out of gear for some time. All the prime Hindu organisations like Sanyukt Sanatan Morcha, Nepal Hindu Rashtra Abhiyan, Vishwa Hindu Mahasangha, Hindu Dharma Mahasabha Nepal and many other organisations have shown a great Hindu solidarity in Nepal for their demand of Hindu Rashtra in Nepal.

According to official statistics, 81.3 percent of Nepal’s population identify themselves as Hindu. The organisers claim there are 90% population belongs to “Omkar Parivar” and obviously of “Sanatana Hindu lineage”. Prior to the China prompted Communist movement in 2008, the country was officially a Hindu state, but was declared a secular state after 2008. Now, the majority people are  giving a Hindu reactions on the issue during feedback collection on the draft constitution.

A faction of the small population has approved of secularism, whereas others are struggling strongly for reinstating Nepal as a Hindu state.