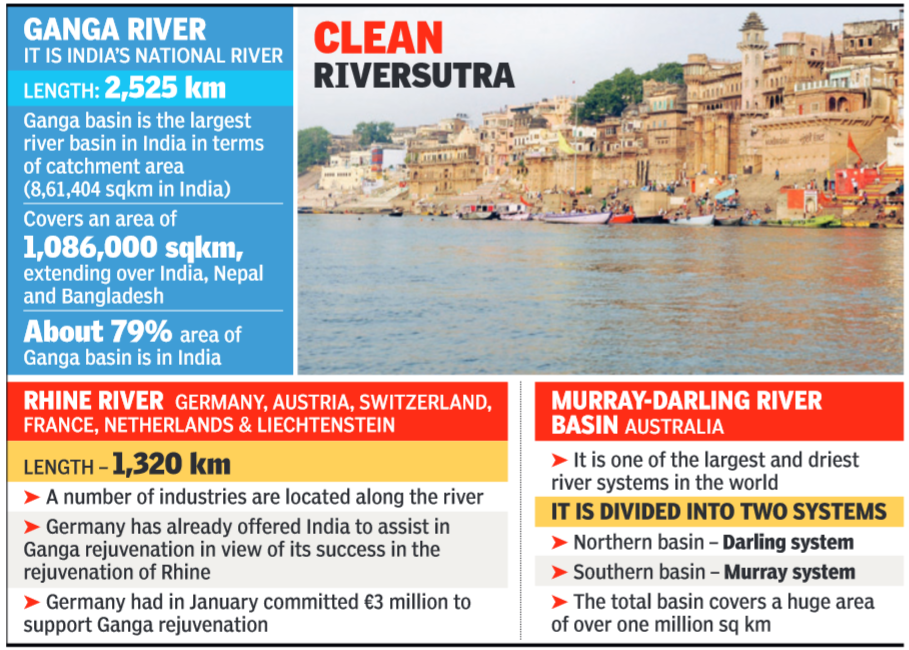 Inspiration flows from Rhine: It was once among the dirtiest rivers in the world

As India stares at the mammoth task of cleaning the Ganga/Yamuna and looks for inspiration outside the country, it is the Rhine river of western Europe which has caught the attention of policy-makers here, due its record of rejuvenation despite once being one of the most polluted river systems of the world.

India initially looked at many success stories while making its plan to clean the national river. However, the Rhine scored over Thames (England), Seine (France), Danube (central and eastern Europe), Mississippi (USA) and river Singapore.

Germany, which played a significant role in rejuvenating this river system which passes through many countries in western Europe, had made a number of presentations and impressed officials who have been looking for some workable solutions to clean Ganga.

A team of officials from the water resources ministry will now travel to Europe next week to see how countries including Austria, Switzerland, Germany, France and Netherlands managed the river system which once saw discharge of industrial effluents and solid waste from cities like Basel, Strasbourg, Worms, Mainz and Cologne.

“This is, however, a thing of the past. The Western European countries had fought many odds and achieved what now we are planning to do with Ganga and Yamuna”, said an official, noting Rhine is much cleaner despite having many chemical industrial units along its bank.

The lesson from Rhine in Europe will be clubbed with what India would learn from Australia on maintaining the Murray-Darling Basin which is one of the largest river systems in the world.

“As far as maintaining the ecological balance and overall development of the big river basin of Ganga is concerned, we are looking at Australia’s example. The composition\nature of the Murray-Darling basin and the way Australia maintains it can be a big lesson for us”, said the official.

Besides Germany and Australia, the third country which would present an important solution is Israel which is the world leader in drip irrigation technology as well as in efficient use of water resources.

Experts from Israel also made presentation to officials of the water resources ministry here last week. They discussed how they could help India in adopting drip irrigation in the Ganga basin so that substantial amount of river water does not get diverted for irrigation.

Officials here believe that the efficient use of water for irrigation would ensure adequate water in the river and it would help in maintaining the river’s ecological flow – an important feature of the river system to naturally deal with pollutants.

Amid discussions and an ongoing operation to set up adequate number of Sewage Treatment Plants (STPs) and effluent treatment plants in cities\towns along Ganga to deal with the discharge of solid waste and industrial effluents, the Prime Minister Narendra Modi on Wednesday appealed to Indian scientists to take it as a challenge.

Describing the Ganga cleaning\rejuvenation a “scientific project”, he asked them to come up with “innovative solutions” to achieve this goal. He made this remark while discussing the issue during an interaction with scientists from the country’s top institutions.

She said two milestone developments were the recent Cabinet approval for the project and the decision of the centre to pick up the entire tab for the project, not requiring any contribution from the states. “This move is expected to speed up the project as even 20-25% state share was sometimes difficult to get. For instance, in Kanpur, getting the UP government to give its share of a sewage treatment plant was taking a lot of time. Now, the centre would take care of the entire funding and the cabinet approval implies commitment of all ministries and departments concerned,” said Bharti.

The project has been allotted a budget of Rs20,000 crore to be spent in coming four years. The first phase will be completed by October 2016 and the entire project could be completed in another ten years, she added.

In another decision, a cabinet note is ready on the Wainganga-Nalganga river linking project in Vidarbha. The National Water Development Agency (NWDA) has taken up this project and is in the process of preparing the detailed project report (DPR). Wainganga (Gosikhurd)-Nalganga (Purna Tapi) intrastate link envisages diversion of 2,721 MMC from Gosikhurd project across river Wainganga to western Vidarbha. Of this, 2,207 MMC is earmarked for irrigation, 253 MMC for municipal and industrial purposes in the command areas and remaining 261 MMC will be lost in transmission. The project is estimated to cost Rs8,294.26 crore.

Dismissing the Congress party allegations that water from rivers of Maharashtra like Damanganga and Par-Tapi were being diverted to Gujarat just to favour that state, she said it was being done to comply with the verdict of the three-judge bench of Supreme Court on water sharing case. Mumbai had enjoyed benefit of the water sharing from Damanganga for 60 years, she said. The Par-Tapi waters were now going to the sea and its proper use was being planned, she said.