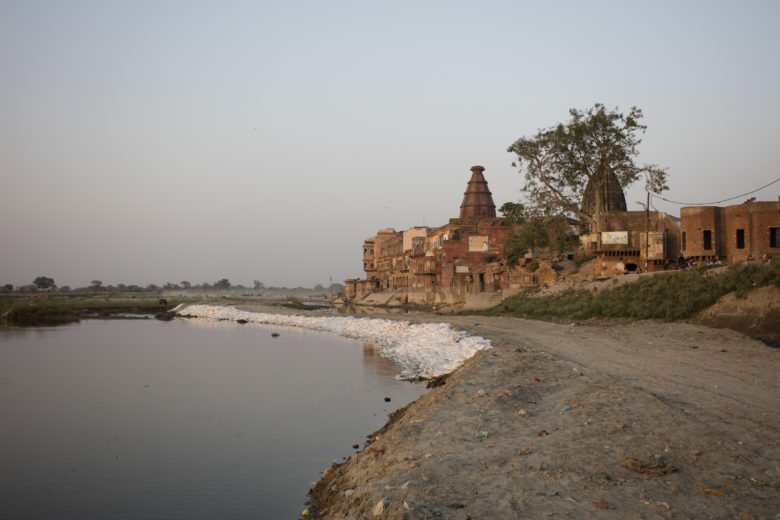 After the Allahabad High Court issued the notices to the different government department, for carrying out the ‘Riverfront Development Project’ in Vrindavan, surprising revelation came in light from an official letter received as a reply of the ‘Right to Information.’

In order to challenge the ‘developmental work’ on the bank of Yamuna near the series of the Heritage Ghats, including the world famous Keshi Ghat, the petitioner Mahant Shri Madhumangal Sharan Das Shukla sought information from the different government departments under the Right to Information. Such an application was filed with the Archaeological Survey of India also, to know if the mining and the construction activity, being carried out for the River Front Development Project was permitted by the department.

Although, the reply to the application came late, and could not be submitted in the court on 6th October, the RTI revealed that the Archaeological Survey of India (ASI) had raised serious objection in executing the project. The ASI had already sent a show cause notice, which was not replied by the contractor. After that a First Information Report (FIR) was filed in the Vrindavan Police Station against the contractor of state’s Irrigation Department on June 17th. Apparently, the Police also didn’t take action against the contractor.

However, the contractor overlooked the FIR and objections were raised by ASI in June and continued with the work, after the water receded from the ghats, at the end of the monsoon.
According to the law no construction can be raised within 100 meters radius of any ASI protected monuments, and prior permission from the department is necessary to build anything in next 200 meters.

Shri Bhuvan Vikram, the Superintending Archaeologist of the ASI in Agra said that he had informed the Director General of the department, and now the department would itself remove the unauthorized construction and recover the expensed from the contractor.

“We received the letter one day after the court heard the case. Had we received the letter earlier, and submitted it during the hearing, there was sufficient ground that the Hon’ble court would issue an injunction,” said Mahant Madhumangal Sharan Das who is the petitioner in this case.