This era was marked by a presence of several important personalities. After making an extensive pilgrimage of Bharata Bhumi (India) Sripada Madhavendra Puri began the restoration work of Vrindavan. Sri Lokanath Gosvami was the first of the Gosvamis who came to Vrindavan.

Sri Caitanya went to Sri Vrindavan and revealed many Holy Places there (Caitanya-caritamrta Madhya 1,2,17,18). When Lord Caitanya first arrived in Vraja, He stayed at a brahmana’s house in Mathura. He would walk around Vrindavan every day visiting  the sacred places connected with Lord Krishna’s pastimes. Later, Lord Caitanya moved His residence to Akrura Ghat and would daily visit Imlitala, where He sat looking at the river Yamuna while chanting Hare Krishna and constantly shedding tears in an ecstatic mood of divine love. After a few months (in 1516), Lord Caitanya left for Jagannath Puri and directed two of His dear-most followers, Rupa and Sanatana Gosvamis to proceed immediately to Vrindavan, not only to excavate the places of Lord Krishna’s pastimes and build temples but also to write books on the science of bhakti yoga, in order to establish the teachings of Lord Caitanya for the benefit of all future generations (CC Adi 7, Madhya 1, 19, Antya 4). Other members of the Six Gosvamis later joined them.   Even though both Rupa and Sanatana were very important ministers in the government of Bengal, by the divine inspiration of Lord Caitanya, they completely renounced mundane family life in order to fully serve the mission of Lord Caitanya. When they first came to Vrindavan, it was just a large forest, and at night they would sleep under the trees. They dressed only in simple kaupins (loincloths), and subsisted on forest roots and dry chapatis obtained by begging alms (madhukari). The Six Gosvamis hardly slept more than two hours a day and spent most of their time in meditation and writing books on the science of bhakti-yoga.

Some of their original works, written on palm leaves, have been preserved and can be seen at the Vrindavan Research Institute. 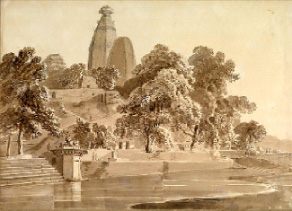 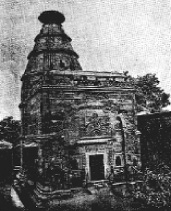 The fame of the Six Gosvamis spread so far and wide that even Emperor Akbar decided to pay a visit to Vrindavan in the year 1570. Jiva Gosvami led him blindfolded into the sacred kunja of Nidhuvan. So great was the Emperor’s spiritual experience there, that to commemorate the event, he granted permission to construct four grand temples dedicated to Lord Krishna. The temples were Govindaji, Gopinath, Madana-mohan and Jugal-kisore. The Emperor also donated funds to set up a library for the preservation of the Gosvamis’s books at Radha-Damodara temple. This library used to be in the room to the left of the altar and is still known as grantha ghar (book house). Akbar even provided first class red sandstone, normally reserved for the Emperor’s palaces and forts; so much he appreciated the Six Gosvamis. 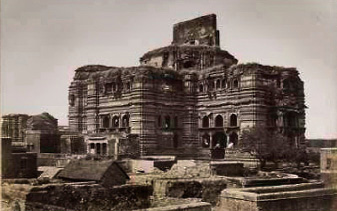 Other devotees gradually came but later Vrindavan was raided by Muslims, particularly by Emporer Aurangzeb in the year 1670. This fanatic Muslim leader was responsible for destroying thousand's of temples throughout India during his rule, many of which were in Vrindavan.  Many Deities were destroyed along with the temples, while some such as Govinda, Gopinath and Madana-mohan were moved to safer places like Nathadwar, Jaipur and Karoli in neighboring state of Rajasthan. Pratibhu-murtis were installed and worshipped as substitute Deities by the Goswamis of those temples.

The famous female saints Mirabai and Karmetibai also lived in Vrindavan like the Six Gosvamis. Many kings gave great impetus to the glory of Vrindavan by making it the most famous place of pilgrimage.

One of the most outstanding places as far as architecture is concerned, is the Jaipur mandir constructed by the king of Jaipur from the Nimbarka sampradaya. Even today, more and more beautiful temples make their appearance. The mystical enchantment of Vrindavan reaches out to the longing souls in search of divine love. The past and the present of Braja mandal gives ample evidence to this fact.

Today some restorations of Vrindavan are underway to bring the dham back to it’s former Glory. One notable example is The Braj Foundation which has restored the Brahma Kunda.

It is the duty of all devotees to keep Vrindavan clean and restored.