The following is an excerpt of a lecture by Srila Sridhara Deva Gosvami Maharaja given on the occasion of Makara Sankranti, the day of Sri Caitanya Mahaprabhu's acceptance of sannyasa, on January 14th 1984 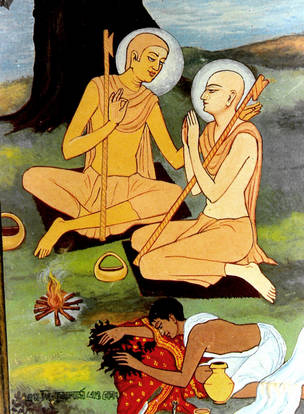 On this day, early in the morning, Mahaprabhu crossed the river by swimming at three o’clock or so, and ran towards Katwa. It was winter season, but He had no care for the cold. There was so much heat in His body and mind – on one side by the viraha, separation of Krsna, and on another side by the duty of preaching to the world about devotion to Krsna. The call of that duty actuated Him to get out of Navadvipa and to distribute to the public love of Lord Krsna throughout the length and breadth of the world. He cared for nothing else, He was simply running, feeling vipralambha for Krsna. The call of Krsna made everything else tasteless.

So much heat is created for the national cause. There are so many atomic bombs, so many soldiers ready to sacrifice their life for the national interest. How small is this mortal prosperity? What does it mean? It is trifling; it is nothing. What sort of energy should we collect for our eternal wealth? Such a high degree of welfare is to be distributed to all – to get back to their own home – to take these misguided people towards their sweet home. That call of duty arose in the mind of Mahaprabhu, “All these vagabonds should be taken to their own home and their guardian.”

They all should be taken to their home. They are wandering like so many beasts in the jungle without knowing what is good and what is bad, always engaged in competition and biting one another. They say they are civilised? Jungle animals are biting one another and trying to live at the cost of other fellow members of the jungle – as humans, more efficiently, they are following the same program. At the cost of other nations, they want to fight. What is this? It is a civilized jungle! Then what is civilisation? Civilisation loses its meaning. Civil means gentle, but is this gentleness? They are proud that they are doing things as a body. If jungle habits can be performed in the name of nationalism, then it is justified. It is all foolishness.

A half-truth is worse than a falsehood. Misguided help is much more dangerous. That means directing ones attention towards the wrong thing. Vedasraya nastikya-vada bauddhake adhika – if we preach atheism in the name of religion, that is more dangerous than an ordinary straight atheist. So in the name of civilisation, we are doing things that are shameful to an animal of the jungle. Is giving food, clothing and so-called education to the public a very good thing? No! It is more important to take them home. That is what is necessary. There is an expression, ‘home comfort.’ Home comfort is very sweet. Home means our mother, father and so many affectionate relatives – they know the real necessity of their child. The child may not know, but the home knows what is his real interest.

Unconsciously the atmosphere will come render real help to us to guide us towards our home; back to God and back to home. We are all wanderers in the streets. It will collect us and to take us home. That was the duty of Mahaprabhu.

By hook or by crook, by any means, take them home. The child may not know. He may be crazy. He may run this way or that way but not towards home. And that is the problem. That makes the case complex. Otherwise it would be very simple. The responsibility is on the guide. And according to the guide's capacity, the real effect comes to help him. That is a special capacity and also the delegation of the Lord, both combined makes the specific characteristic in the acarya.

‘Rank is but the guinea stamp, man is the gold.’ The rank is one thing and the man is another. When his inner capacity and the delegation are combined, that is effective. The combination of the personal characteristic of the teacher and also the delegated power of the Lord produces the desired result. Mahaprabhu recommended Rupa Gosvami to Svarupa-damodara, “He is the fittest person to deal with the devotional scriptures. I have delegated My ability to him.” He is requesting Svarupa-damodara also, “Whatever you have got, please transfer to him. He is a very worthy person. He can manage it and he can distribute it very well. He will produce it in a very befitting way and he will prepare and distribute this devotional scripture."

So this day of the year was the last day that Mahaprabhu stayed with His family. In the afternoon He met many of His friends and appealed to them fervently to take to krsna-nama. “In every engagement, try to take Krsna always with you. Eating sleeping, working – whatever you are physically engaged in, go on with the consciousness of Krsna.

Then, by the end of the night, He left Navadvipa. After five years He came back but did not enter His home. He only approached the front of His house and cast a glance towards the door. We are told that Visnupriya-devi, wearing a very dirty cover around her body, fell flat at His feet. Mahaprabhu Sri Caitanyadeva could understand that it must be her and He took off His sandals. “Try to remove your pain of separation with the help of these two sandals." Then He went away. Those wooden sandals, we are told, are still on the throne of this Visnupriya temple here in Navadvipa. Those very old wooden sandals are still shown there and Visnupriya-devi used to worship them, five years after He took sannyasa.

Then Mahaprabhu moved towards Vrndavana via Ramakeli, and after accepting Rupa-Sanatana, He came back again to Santipura and from there traveled to Puri. From Puri He went via Benares to Vrndavana.

This month of Pausa is extremely cold, but Mahaprabhu passed the whole month in Vrndavana, visiting different places of krsna-lila. Then at the beginning of the month of Magha, He came to take bath in Prayaga where he met Svarupa-damodara and Sri Rupa. For nearly a fortnight He stayed there and educated Rupa in raga-bhakti. Then Rupa asked to go to Vrndavana and he was entrusted with some duties.

Then Mahaprabhu came to Benares and met Sanatana. For two months He lived there and instructed Sanatana in an elaborate way. Benares was also the capital of the Mayavadis, and He met their leader and converted him. Then Mahaprabhu went back to Puri.

Twenty-four years of His life He was in Navadvipa, and for another six years He toured different parts of India and the other eighteen years He stayed in Puri. During the first six years in Puri He used to meet with so many devotees, and then during the last twelve years He almost cut off His connection with the public and engaged Himself deeply in the cultivation of the mood of separation – vipralambha. For a full twelve years He engaged in the different mental stages of Radharani – that deep and fiery separation was depicted for twelve years. Ramananda Raya and Svarupa-damodara were His very close assistants. All day and night Svarupa-damodara attended Him with some of His other friends. Sometimes Mahaprabhu would rub His face on the wall, “I cannot tolerate this separation!”