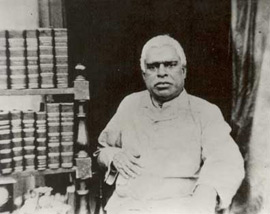 "The moment that the jivas desire to enjoy independently while gazing at the two banks of the river, they become averse to Krsna, who is like the sun."

"The jiva appeared by the marginal energy at the dividing line between spirit and matter. From that position, he began to gaze at the spiritual and material worlds. Those jivas who were attracted somewhat to realization of the Supreme Person became desirous of the spiritual realm because of that contact of knowledge. They then obtained strength from the hladini potency of the abundant cit sakti, which made them favorable to the Lord eternally, and they were brought into the spiritual world as associates of the Lord. Those who, by their own free will, became bewildered and became greedy for maya situated on the opposite side, being beckoned by maya, then became attracted to the material universe, and were thrown in the universe by Karanarnavasayi Visnu, the controller of maya. That was but the result of their eternal aversion to the Supreme Lord. The moment they entered the material realm, they became overcome by ignorance, the function of maya. Overcome by ignorance, they fell into the wheel of binding karma in order to become fully absorbed in their task." (Mahaprabhura-siksa ch.7)

"Among the unlimited potencies of Sri Krsna, there is one known as tatastha-sakti (border-potency). From that sakti comes out the jiva-souls remaining at the junction of the two worlds, viz., the transcendental and the mundane ones, may contact them both. In its composition it is only the atomic cit (pure sentience) . . . On account of the purity in its composition, it has got the capacity for being the eternal denizen with divine bliss in the transcendental power." (Jaiva Dharma, chapter 4)

"A jiva is a spark of the eternal consciousness. A jiva is first situated on the line of demarcation between the material world and the spiritual world. There those jivas who do not forget their relation with Krsna derive the power of consciousness and are drawn into the spiritual world, they come in eternal touch with Krsna and enjoy beatitude arising from the worship of Krsna. And those who forget Krsna and give themselves up to maya's enjoyments, maya with her own force draws them into herself. It is from that very moment that we fall into the misery of this world." (Jaiva Dharma, chapter 7)

"The semblance or dim reflection of the internal Cit-potency is the jiva-sakti (potency) or tatastha-sakti stationed in between cit-jagat and a-cit-jagat or mayika-jagat whereas the shadow or perverted reflection of that internal cit potency is the maya-sakti or external a-cit potency. All the jivas emanate from the tatastha-sakti of God and accordingly the mundane worlds emanate from the maya-sakti of God." (Bhagavat-arka Marici-mala, chap. 1, Intro)

"The jiva-souls are emanated from the jiva-sakti of Sri Krsna and they are spiritual but atomic. In the very self of the jiva-soul or in his constitution practically there remains no maya. As jiva-souls are atomic in size and being emanated from the tatastha-sakti of Sri Krsna (viz. from the intermediary-potency which exists in between cit-jagat and mayika-jagat) jiva-soul is liable to be subjected to maya when he becomes averse to his constitutional right of serving the Lord. Jiva-soul in bondage misconstrues himself as the doer and enjoyer, therefore is affinated to the adopted bodies that are provided by prakrti. A jiva by dint of spiritual virtue may possess steadfast devotion to Sri Krsna and getting rid of worldly affinity goes back to the abode of bliss." (Bhagavat-arka Marici-mala, ch. 7, text 34, purport)

"The constituent particles, in the form of pencils of effulgence of Maha-Visnu are manifest as the individual souls (jivas)." (Brahma-samhita 10, purp.)

"The root of all actions is the desire for acts, the root of which again is avidya. Avidya is the name for the forgetfulness of soul's essential nature that 'I am Krsna's servant.' This avidya did not commence within the course of the mundane time. That root of karma of the jiva arose when he was at the tatastha position. As such, the beginning of karma is not to be traced within mundane time, and, on that account karma is beginning-less." (Jaiva Dharma)

"There are two types of jivas liberated from maya, nitya-mukta, eternally liberated, and baddha-mukta, those who were bound but became liberated. The jivas who were never bound by maya are called nitya-mukta. The nitya-muktas are also of two types, aisvarya gata nitya mukta and madhurya gata nitya mukta. The former are the associates of Lord Narayana in Vaikuntha and are the atomic particles from Mula Sankarsana. The latter are the associates of Lord Krsna in Goloka. They are the atomic particles of Sri Baladeva situated in Goloka Vrndavana." (Jaiva-Dharma, Chapter 17)