What is lesser known about him is that his campaign for equality took him to India, where he gained inspiration from Mahatma Gandhi’s nonviolent methods of social change. The visit was a powerful experience for King, a Baptist Minister and deeply spiritual man. 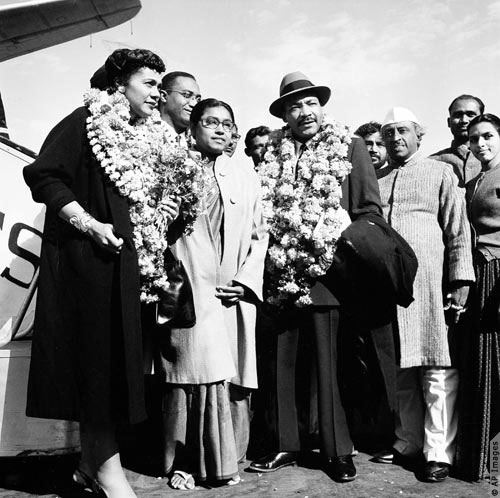 It’s also interesting to note that as well as seeing the connection between Martin Luther King and Gandhi we can in turn trace a connection from Gandhi to ISKCON’s founder Srila Prabhupada, who gave the world a profound spiritual understanding of the equality that King held so dear.

King first discovered Gandhi through civil rights leader, theologian, and educator Howard Thurman, who mentored the young King and whose missionary work had taken him abroad where he had met and conferred with the Mahatma. 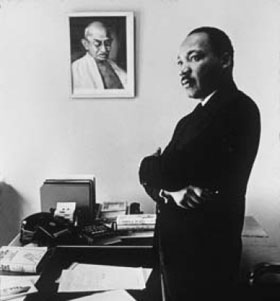 King says in his autobiography that “Gandhi was the guiding light of our technique of nonviolent social change” during the Montgomery, Alabama, bus boycott in 1956 that ended segregation on the city’s buses, and throughout the years that King led the American civil rights movement.

Dr. King wanted to see for himself the results of Gandhi’s nonviolent campaign to end British colonial rule and improve the lives of India’s “untouchables” (members of the lowest social caste). And so, invited by Indian Prime Minister Jawaharlal Nehru, he traveled to India in 1959 with his wife Coretta, four years after Rosa Parks sparked the bus boycott and eleven years after Gandhi was assassinated.

King spent one month in India, where he visited sites where Gandhi had lived, struggled and held prayer meetings. He gave a national address on All India Radio, met freedom fighters and stayed in a room where Gandhi had slept. He was draped with garlands in the traditional Indian style everywhere he went.

He also made a journey to Sabarmati Ashram in the western city of Ahmedabad, along the Sabarmati River; this was the starting point of Gandhi's Salt March, a 200-mile walk the Mahatma made, using only a bamboo staff to dig up handfuls of sea salt in defiance of British salt laws.

After returning from India, King described his visit as “One of the most concentrated and eye-opening experiences of my life.”

Of course, Martin Luther King’s main interest in India, and Gandhi, was Gandhi’s philosophy of nonviolence, called satyagraha, which he declared was “the only logical and moral approach to the solution of the race problem in the United States.

But he also made several interesting allusions to other facets of Gandhi and his homeland. King had known before visiting India that the inspiration for Gandhi's satyagraha (or soulforce) movement came from his Hindu faith, but he hadn’t known the full extent of India’s religious depth and diversity, which awed and inspired him. In fact, when he returned to his pulpit in Montgomery, Alabama, he gave a sermon in which he said: "O God, our gracious heavenly father. We call you this name. Some call thee Allah, some call you Elohim. Some call you Jehovah, some call you Brahma."

Of course, King’s comment is a bit mislead, since Brahma is described in Vedic scriptures not as God, but as a servant of God—Krishna. Still, in essence King’s words show this devout Christian’s broad-mindedness, and his understanding that differs from the fundamentalist Christian perspective—it’s not that one religion worships the true God, and all others are false; rather, all bona fide religions worship the same God, and simply call him different names. In fact, King’s perspective is remarkably similar to a statement ISKCON founder Srila Prabhupada often made.

“We are preaching the central point is God,” he said in a 1974 conversation with a Christian priest in Paris. “You call Him by any name, it doesn't matter, either you call Jehovah or Krishna or Allah, that doesn't matter. But you accept the authority of God and try to love God. This is our mission.”

Also interesting is Martin Luther King’s statement on All India Radio during his 1959 Indian visit: “In a real sense, Mahatma Gandhi embodied in his life certain universal principles that are inherent in the moral structure of the universe, and these principles are as inescapable as the law of gravitation.”

These universal principles were strongly tied to spiritual principles which Gandhi followed. And it was these principles which, to a large degree, attracted Srila Prabhupada to Gandhi when he was a student in 1916, studying at Calcutta’s prestigious Scottish Churches College.

Like many students at the time, Prabhupada—then Abhay Charan De—was drawn by the call to svarj, India’s drive for independence. He was especially interested in Gandhi, for Gandhi always carried a Bhagavad-gita; he daily read Lord Krishna's holy words and spoke of being guided by the Gita above all other books. And his personal habits were pure. He abstained from all intoxication, meat-eating, and illicit sex. He lived simply, like a sadhu, yet he seemed to have more integrity than the begging sadhus Abhay had seen so many times.

Abhay moved to align himself more closely with Gandhi’s movement in 1920, making a statement by refusing his degree from Scottish Church’s College, a British school.

And much later, after Gandhi passed away in 1948, and the directors of the Mahatma Gandhi Memorial National Fund invited suggestions on how to commemorate Gandhi's life and work, Abhay wrote to them, proposing that a fitting memorial to Mahatma Gandhi would be to institute daily congregational readings from the Bhagavad-gita, which Gandhi studied daily.

Despite his pressing political activities, Abhay wrote, Gandhi had never missed his daily prayer meetings in the evenings. Even at the time of his assassination, he had been on his way to attend his daily kirtana, and died crying out the name of God—“He Rama!” Abhay stressed that it was because of Gandhi's regular participation in congregational prayer that he had been strong in his work to raise the moral standard of humanity. “Gandhiji minus his spiritual activities,” Abhay wrote, “is an ordinary politician. But actually he was a saint amongst the statesmen…”

Abhay also mentioned that Gandhi was known for his attempts to enable the lower classes to enter the temples, and in Noakhali had installed Deities of Radha and Krishna for the ordinary man to worship. Gandhi called the so-called “untouchables” “harijanas,” or people of God.

This spirituality, which Prabhupada appreciated, is reflected in an entire room dedicated to Gandhi at the Martin Luther King Jr. Center for Nonviolent Social Change in Atlanta, Georgia. There, as well as Gandhi's sandals, walking stick, spectacles and a few of his white robes, sit prayer beads and a Hindu prayer book.

Later in his life, of course, Srila Prabhupada found that Gandhi was lacking in his strategies for peace and equality, and that he put more importance in political social change than he did in spiritual change. And so after meeting his future guru, Bhaktisiddhanta Sarasvati Goswami, in 1922, Prabhupada left Gandhi’s movement.

He explained clearly why, and detailed the more effective solutions he had discovered, in one of his early editions of Back to Godhead magazine in 1944.

The article in question was about the talks between Gandhi and Muhammad Ali Jinnah, then leader of the All-India Muslim League, aiming to unite the Muslim and Hindu Indian people.

“We are sorry to learn that Gandhi-Jinnah talks about unity of the Indian people have failed for the present,” Prabhupada wrote, saying that even if they made a successful solution, it would break up and take the shape of another problem. He was of the opinion that “Fighting will go on between Hindu and Mohammedan… till the day of annihilation.” As long as there was the contaminated self-interest of sense gratification, there would be fighting between brother and brother, father and son, and nation and nation. Real unity, he said, would stand only on a plane of transcendental service to the Supreme.

“Mahatma Gandhi,” Abhay wrote, “is far above ordinary human being and we have all respects for him." But Abhay advised Gandhi to give up his activities on the material plane and rise to the transcendental plane of the spirit—then there could be talks about the unity of all people. Abhay cited Bhagavad-gita’s definition of a mahatma: one who concentrates his attention on the service of the Supreme Lord, Sri Krishna. He requested Mahatma Gandhi to adhere to the teachings of Bhagavad-gita and preach its message of surrender to the Supreme Personality of Godhead, Sri Krishna. In this way, Mahatma Gandhi, through his influential position in the world, could bring about universal relief, simply by preaching the message of Bhagavad-gita.

In the same way, Prabhupada probably would have appreciated Martin Luther King’s spirituality and his noble efforts to make a change in the world. But he would have advised him in the same way, to aim for spiritual equality, which is the only kind that can bring about lasting change.

“The humble sages, by virtue of true knowledge, see with equal vision a learned and gentle brahmana, a cow, an elephant, a dog and a dog-eater [outcaste],” reads text 18, chapter five of the Bhagavad-gita. In the purport, Srila Prabhupada writes, “A Krishna conscious person does not make any distinction… Differences of body are meaningless from the viewpoint of a learned transcendentalist. This is due to their relationship to the Supreme, for the Supreme Lord is present in everyone's heart without distinction.”

ISKCON recognizes that in the desire for equality, its mission finds a parallel with Dr. Martin Luther King’s, and thus it has respect for the man himself. ISKCON Los Angeles, for example, has participated in every Kingdom Day Parade—a January event honoring Dr. King—since 1995.

“This is the United People of the Spiritual World,” announcers read as devotees approached the judge’s stand. “This group is part of the International Society for Krishna Consciousness. They are working to keep Dr. King’s dream alive by uniting all people, all races, all religions, on the spiritual platform.

During his acceptance speech when receiving the award on behalf of all the devotees, Ratnabhushana Dasa said, “Someone once asked me why the Hare Krishnas participated in the King parade. I replied that we appreciate that Dr. King had a spiritual vision which allowed him to look past the barriers of race and see all people as equal under God.