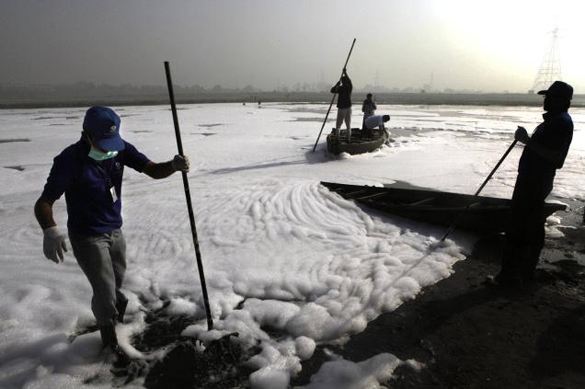 Animal carcasses are not to be dumped into the river, washermen should not use chemicals to wash dirty clothes, the river bank is not to be used as a toilet and no polythene bags — these are among the measures villagers in Rajpura, in Mathura district of Uttar Pradesh, have planned as part of their campaign to clean up the polluted Yamuna.

Hundreds of villagers from Rajpura, a few kilometres upstream of Vrindavan in Mathura district, on Sunday pledged support to the campaign to save the Yamuna river from pollution and make its water potable.

With people from 73 villages in the district joining, the campaign has become the biggest public initiative in the region against river pollution.

The man who leads the campaign is Mathura’s Chief Development Officer Ajay Shankar Pandey who, during his earlier stint in Ghaziabad, had changed the profile of the polluted Hindon river.

Talking to IANS, Mr. Pandey said: “We told the villagers not to wait for others for what they could on their own. It is about saving a dying river, a holy river at that. A series of meetings and interactions with the village leaders and activists helped us draw up a plan of action. We are now putting that into practice.”

“We are confident that once the villagers lead and show the way, the city people will not remain idle spectators but will get involved,” Mr. Pandey added.

“A whole lot of agencies have been roped in, including the panchayti department at each block as well as at the district headquarters and the departments of village development, irrigation, horticulture and fisheries. They will coordinate with the Yamuna Mitra Panchayat to ensure the success of the mission,” a confident Mr. Pandey said.

Each village will have a committee with the pradhan as the chairman. The committee will have three members — two panchayat members and either the panchayat secretary or any one interested in water conservation.

Despite being one of the most sacred rivers in India, the Yamuna in Mathura presents a picture of total neglect.

Court petitions have led to the construction of the Gokul Barrage in Mathura. However, it has not made any difference to Yamuna’s pollution. The river runs like a huge sewage canal transporting industrial effluents and municipal waste.

According to Mr. Pandey’s plan, the committee will ensure animal carcasses are not thrown into the river. Washermen will not be allowed to use chemicals to wash dirty clothes in the Yamuna. One pond in each village will be marked for washing clothes.

The committee will also stop people from constructing latrines or using river banks as toilets.

The panchayat will ban polythene bags and offenders will be punished.

“The villagers will also ensure that idols, toys painted with harmful dyes and puja materials are not immersed in the river. Separate bins will be provided to collect such material,” he said.

The villagers will also help identify the canals and drains discharging into the river, which will be diverted to other routes or would be fenced to fish out polythene and other non-degradable materials.

The plan further includes river ranching, which would be encouraged as it is one of the natural ways of river cleaning, according to the official.

“The movement will for the first time see each villager participating. This can also help in dealing with industrial pollution too. Within a year I assume the water quality would improve significantly,” Pandey expressed his optimism.