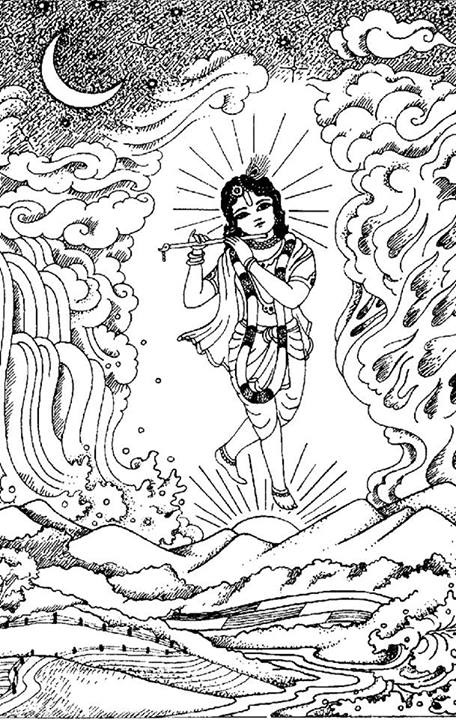 Sri Srimad Gour Govinda Swami Maharaja often said that he wanted to show that everything was in Srila Prabhupada's books. The following article is a humble offering to him to help serve that desire.
—————
Some of the numbers given in Vedic literatures seem too large to be true. For example, the forty-first verse of chapter ninety of the tenth canto of Śrīmad Bhāgavatam states:

[In Dwarka] the Yadu family [had so many children] that they employed 38,800,000 teachers to educate them.

The next verse says lakṣeṇāstesa āhukaḥ — Maharaja Ugrasena had an entourage of thirty trillion attendants. In chapter ninety of Krishna Book, Srila Prabhupada gives an even more fantastic figure: “… it is said that King Ugrasena alone had ten quadrillion soldiers as personal bodyguards.”

One quadrillion is equivalent to a thousand million millions — a one with 15 zeros following it. The world population today is estimated to be 7.148 billion persons. In other words, according to Srila Prabhupada, King Ugrasena had over 100,000 times more personal bodyguards than the entire present population of the earth planet. And aside from that, there were also cooks, laborers, priests, housewives, children, soldiers, and the rest of a variegated population of Dwarka.

Regarding the number of personal servants of Maharaja Ugrasena, Srila Vishwanath Chakravarti Thakura offers an explanation in his commentary to the Śrīmad Bhāgavatam 10.90.42 as follows:

The present tense term “āste” (are) in this verse is used instead of the past tense “āsīd” (were) and this indicates that this great number is being spoken of by Srila Shukadev Goswami from the remembrance of the continuous ongoing nitya-līlā of the Lord [in Goloka Vrindavan, and not from the pastimes that happened on earth].

What to speak of the cows of Vrindavan! In his purport to Śrīmad Bhāgavatam 10.12.2, Srila Vishwanath Chakravarti Thakur says that the number of Krishna’s cows exceeded one followed by seventeen zeros. That’s in the realm of one hundred quadrillion cows. And Visvanath says that was just the young calves, the older cows far exceeded that amount. In his commentary on Bhāgavatam 10.12.2, Srila Jiva Goswami explains:

The boys and calves of Vrindavan together could not be counted. If the number of calves that they herded in the forest was beyond calculation, how many more calves must have been left back in Vraja — the small calves taking milk from their mothers, as well as the mothers of the calves that went to the forest, other cows, the elder male and female calves, the bulls, whose numbers kept increasing daily by the power of Gopal, and the buffalo as well? Thus the animals, cowherd and cowherd women were unlimited in number.

How do we understand such numbers? Are they exaggeration? Allegory?

One should not argue that such a large number of cows could not possibly fit into the thirty-two square mile area of Vrindavan, because the dhāma is unlimited by the inconceivable energy of the Lord. Even a small portion of the holy dhāma is sufficient to accommodate billions of universes each measuring fifty million miles in diameter. Krishna showed this to Brahma in a later chapter.

Srila Prabhupada similarly writes in his purport to Śrīmad Bhāgavatam 10.12.3:

In this verse the words kṛṣṇa-vatsairasaṅkhyātaiḥ are significant. The word asaṅkhyāta means “unlimited.” Krishna’s calves were unlimited. We may speak of hundreds, thousands, tens of thousands, hundreds of thousands, millions, billions, trillions, tens of trillions, and soon, but when we go further to speak of numbers impossible for us to count, we are speaking of unlimited numbers. Such unlimited numbers are indicated here by the word asaṅkhyātaiḥ. Krishna is unlimited, his potency is unlimited, his cows and calves are unlimited, and his space is unlimited. Therefore he is described in Bhagavad-gītā as Para-brahman. The word brahman means “unlimited,” and Krishna is the Supreme Unlimited, Para-brahman. Therefore, we should not consider the statements of this verse to be mythological. They are factual, but inconceivable. Krishna can accommodate an unlimited number of calves and an unlimited measurement of space. This is neither mythological nor false, but if we study Krishna’s potency with our limited knowledge, that potency will never be possible to understand. Ataḥ śrī-kṛṣṇa-nāmādi na bhaved grāhyam indriyaiḥ [Padma Purāṇa quoted in Cc. madhya 17.136]. Our senses cannot perceive how he could keep an unlimited number of calves and cows and have unlimited space in which to do so.

Another example is found in Śrīmad Bhāgavatam 10.33.38 which states brahma-rātra upāvṛtte — Krishna danced with the gopīs for an entire night of Lord Brahma. Krishna describes the length of Lord Brahma’s day and night in Bhagavad-gītā (8.17):

A thousand yugas together equals four million three hundred and twenty thousand years. The Bhāgavatam describes that the duration of those thousand yugas entered into a single twelve-hour night in Vrindavan during which the gopīs danced with Krishna. Srila Vishwanath Chakravarti Thakur compares this inconceivable expansion of time to the fact that many universes fit within the forty-mile range of earthly Vrindavan. Similarly, he says, one may consider how Mother Yasoda was unable to encircle the abdomen of her child Krishna using many, many ropes, or how on another occasion Krishna displayed many universes in his mouth to Mother Yasoda.

In Gokula, nothing is impossible for the Lord, the devotees, the abode, and everything in the abode, by the power of the Lord’s inconceivable energy.

Evidences from the Puranas

Krishna, his devotees, and his abode are not in this material world and cannot be understood by the material senses. In his Śrī Mathurā Māhātmya, Srila Rupa Goswami cites many evidences from various Purāṇas regarding the unlimited glories of Vrindavan. In text fifty-one he quotes the Ādi-varāha Purāṇa:

In the next text Rupa quotes the Mathurā-khaṇḍa of the Skanda Purāṇa:

O king, the particles of dust in this world may be counted in due course of time, but it is impossible to count the number of holy places that are present in Mathura.

Rupa Goswami declares atha prapañcātītam — “[This area of Mathura] is transcendental to the material world.” he then quotes from the Ādi-varāha Purāṇa:

Mathura is completely different from the creation of the creator, because even the controller of this world is unable to describe the unlimited qualities of this holy place. (text 121)

Another perspective is given in the book Prema-vilāsa (chapter 16, texts 174 – 191), wherein the author Nityananda Das relates a conversation that he had with Srila Raghunath Das Goswami that took place while the two were at Radha-kunda:

Raghunath Das Goswami said, “While staying here and visiting the various pastime places, be careful not to commit any offense even in your mind. The pastimes of Krishna cannot be understood, but if you read the books of Srila Rupa Goswami then you will understand them. If you cannot hear about these subjects from the mouth of your guru then you should hear from persons in whom you have full faith, for by doing so you will become fixed in your mind. You should understand the different pastimes that Radha and Krishna are performing day and night in different places in Vrindavan. Although Radha and Krishna are always performing pleasure pastimes in Vrindavan, no one can perceive them. The amazing conjugal pastimes of Radha and Krishna are only understood by the gopīs.”

Nityananda Das replied to Raghunath Das, “There is one doubt in my heart. If you give me your kind permission I will express it to you. My inquisitive mind has become blessed by hearing from your lotus mouth about Vrindavan.

“The distance between Vrindavan and the bank of Radha-kunda and Shyama-kunda is about eight krośas [a krośa is about two miles or three kilometers] and Govardhan is two krośas from the kuṇḍas. Sanketa is eight krośas from Vrindavan, Nandishwara is two krośas and Yavat is one krośa. Radha and Krishna travel between these places in a moment. How is it possible for Radha, Krishna, and their associates to travel such distances daily? For a long time I have had a desire to hear the answer to this question. Otherwise how can a sādhaka understand these pastimes?”

Mercifully, Das Goswami said, “Listen, Nityananda Das! Krishna’s pastimes are always going on in these places. Through śāstra, Mahaprabhu has established that Vrindavan is just like a lotus flower.

“As a lotus, Vrindavan is manifested in two ways, closed and open. It closes itself in pleasure, vilāsa; and opens itself in sport, līlā.

“In this way Radha Krishna and their associates come and go. Only those favored devotees of the Lord can understand this.

“By the strength of yogamāyā one can understand these matters. Other persons cannot understand.”

As unimaginably tiny creatures in this vast creation, the only way that we can hope to understand the inconceivable pastimes, abode and associates of the Lord is if they manifest themselves to us. Srila Prabhupada writes in chapter three of Beyond Birth and Death:

According to Brahma-saṁhitā there are two ways of acquiring knowledge — the ascending process and the descending process. By the ascending process one is elevated by knowledge acquired by himself. In this way one thinks, “I don’t care for any authorities or books. I will attain knowledge myself by meditation, philosophy, etc. In this way I will understand God.” The other process, the descending process, involves receiving knowledge from higher authorities. Brahma-saṁhitā states that if one takes to the ascending process and travels at the speed of mind and wind for millions of years, he will still end up not knowing. For him, the subject matter will remain elusive and inconceivable. But that subject matter is given in Bhagavad-gītā: ananya-cetāḥ. Krishna says to meditate on him without deviation from the path of devotional service in submission. For one who worships him in this way —tasyāhaṁ sulabhaḥ: “I become easily available.”

—————
This article was excerpted from issue 329 of the email magazine Sri Krishna Kathamrita Bindu, produced by ISKCON Gopal Jiu Publications. To read back issues or to get a free subscription go to: www.gopaljiu.org