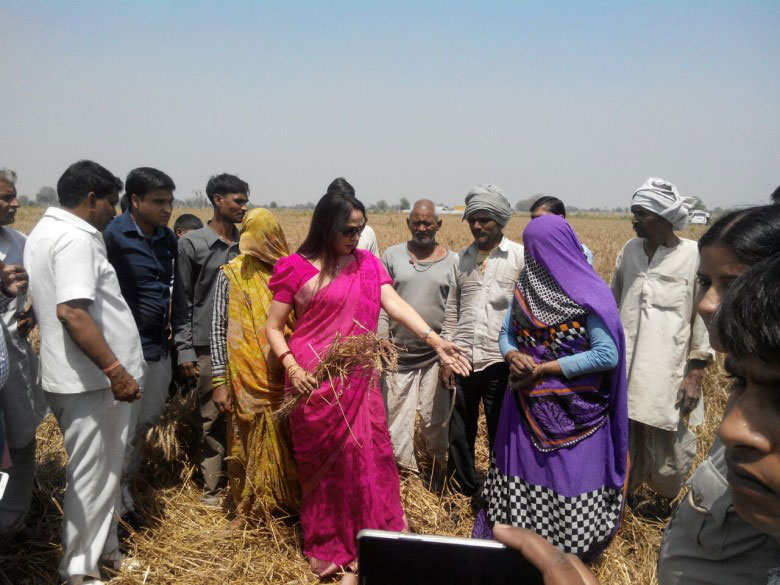 Much hyped Mathura Mahotsava, the cultural extravaganza being organized under the guidance of Hema Malini was postponed. The event was scheduled for April 11-12 in the campus of the proposed Chandrodaya Mandir.

The reason behind postponing the event was the recent hail storms in Vraja which effected the farmers adversely. Hema Malini wished to spend the time in the villages of Vraja to solve the problems of the farmers and wiping their tears. She has been extensively making tours to the remote villages of the Mathura district to show her solidarity with the farmers in the time of crisis.

Hema Malini informed the local media that she met with the central leaders in order to ensure financial assistance to the victims who have been almost devastated by the recent hail storms and the untimely rain in over last forty five days.

A number of cine-stars and artists from Bollywood were invited to participate in the mega event and the UP Chief Minister Shri Akhilesh Yadav had given his consent to inaugurate the event. Bollywood art director Ketan Desai was given the responsibility of creating the replica of the actual Vraja.

The BJP leader was being criticized by her opponents from various political parties for going ahead with her plan in the time of crisis before postponing the event. The local musicians had also expressed their discontentment for not inviting them in the event. Pt. Damodar Sharma, an Akashvani (radio) folk music singer from Vrindavan said, “We don’t mind the Bollywood stars participating in the event, but if Hema ji is really concerned to promote the Vraja culture, then she should invite the local artists also.”

Meanwhile the M.P. travelled to several villages and met the farmers. She visited the villages of Bhartia, Ajhai, Nari Semri, Khanpur etc. She was shocked to see the devastation. She assured the farmers that she had already conveyed the ground situation of the Mathura District to the Central government. Soon she will get a financial package released by the government.

She told the farmers, “I want to assure that I am fully with you in this moment of crisis. The BJP workers are working overtime to get financial support for you. A relief package will soon be announced by the government. I have full sympathy with the family of the deceased.” She further assured, “I have been in constant touch with the Centre and the state government. Yesterday only, I met the finance minister and briefed him about the extent of devastation of the Mathura farmers.’’

She sent a list of demands to the state government which included the loan waiver on agricultural loan, impartial survey on the extent of devastation, declaring the district as a disaster effected zone, Rupees Ten lakh compensation for the deceased, compensation of Rs. 25000 per hectare, exemption on electricity bills etc.