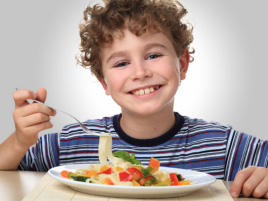 Asked which school meals were their favorites, students at a public school in the New York borough of Queens don't say chicken fingers or meatballs. Instead, they name rice and kidney beans, black bean quesadillas or tofu with Chinese noodles.

"Whoever thought they would hear a third-grader saying that they liked tofu and Chinese noodles?" asked Dennis Walcott, New York City schools chancellor.

Walcott was at the Active Learning Elementary School this week to celebrate its move to all-vegetarian meals five days a week. The school of nearly 400 students, from pre-kindergarten to third grade, was founded five years ago on the principle that a healthy lifestyle leads to strong academic achievement.

"We decided on a vision where health and nutrition would be a part of educating the whole child," school principal Bob Groff said.

The school's focus on healthier meals began three years ago when Groff noticed a majority of students were bringing their own vegetarian meals. The school went meatless three days a week about a year and a half ago. It also tested meals on a small group of students, gathering feedback and changing the menu accordingly.

Active Learning's student body may be more accustomed to vegetarian diets than most, with 85% of the students being Asian and another 10% Hispanic, said Margie Feinberg, spokeswoman for the New York Department of Education.

"Rice was a staple of many of their home foods," Groff said of the students.