Answer: The mantra meditation that you speak of [in Sanskrit] is called mantra-dhyana, which culminates in the stage of samadhi [trance]. This is a developmental process and one has to pass through many stages before reaching perfection. But why we are faced with the difficulty of being unable to control the mind while chanting japa should first be understood.

The very nature of the mind is flickering and restless like the wind. For this reason it is sometimes seen that a person will adopt the yoga practices of pranayama and asana as a means to control the mind. In Hari-bhakti-vilasa by Sanatana Gosvami, the process of pranayama and asana for a devotee is mentioned in the fifth chapter, as performed with pranava [omkara] or kama-bija. There it is said that while sitting in either padma-asana or svastika-asana one should chant the mantra sixteen times while inhaling, chant the mantra sixty-four times while holding the breath and chant the mantra thirty-two times while exhaling.

Sanatana Gosvami also recommends that the practitioner meditates upon Visnu [Krsna] and states that one should remember Rudra as the out-going breath, Brahma as the in-going breath and Visnu as the breath that is retained within.

After explaining thus, Sanatana Gosvami relates the glories of pranayama by citing a verse from Padma Purana wherein Devahuti and Vikundala glorify the process of pranayama.

Sanatana Gosvami suggests that one perform pranayama before taking bath (within the confines of one's house), before performing arcana [Deity worship] and before chanting gayatri [japa]. 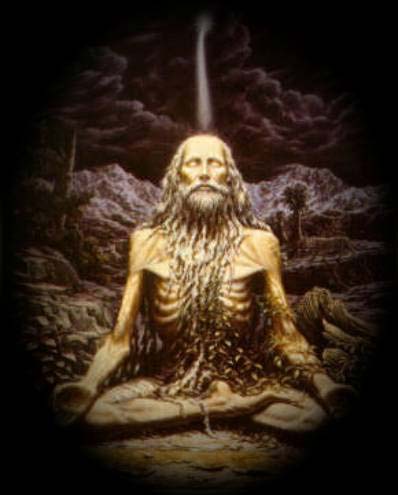 As for the process of yoga, in and of itself, one should remember that many great yogis in ancient times, who were expert in yoga meditation again became mentally disturbed and fell down from their position. In Bhagavad-gita also, Arjuna is seen to reject Krsna's instruction to follow the yoga process.

"O Madhusudana, this system of yoga which You have summarized appears impractical and unendurable to me, for the mind is restless and unsteady." [Bhagavad-gita 6:33]

In Prema-pradipa, Bhaktivinoda Thakura says the yoga system with no connection to krsna-prema is effectively a waste of time and energy.

"The domination over material nature attained in the practice of yoga is only a temporary result. In that position the ultimate result may be far off and time and again impediments are observed. In the path of yoga there are hindrances at every step.

"First, at the time of practicing yama and niyama, religiosity is awakened, and as a result of attaining this insignificant result one becomes known as religious-minded, even though no attempt has been made to achieve prema.

"Third, although by the process of pratyahara one achieves control of the senses, if prema is lacking this is called dry or insignificant renunciation. The reason is that for attaining the ultimate goal, enjoyment and renunciation give equal results. Useless renunciation simply makes one stone-hearted.

"Fourth, during dhyana, dharana, and samadhi, even if material thoughts are removed, if prema is not awakened the living entity loses his individuality. If the understanding, 'I am Brahman' does not awaken pure love, then that results in destruction of his existence.

"Therefore, please consider: the ultimate goal of yoga is excellent, but the path is full of difficulties. You are a Vaisnava as well as a yogi, therefore you can understand my words without bias." (Bhaktivinoda Thakura, Prema-pradipa, Second Ray)

If we want to control the mind we should first understand why it is that the mind continues to wander here and there. The principle reasons are two, anarthas and aparadha [impure qualities and offenses to the Holy Name]. This being the root cause of mental instability, the mind will again return to its wanderings when the artificial means of control [yoga] are withdrawn.

"If one may sometimes, because of foolishness or immaturity, commit offenses to the Holy Name, then the remedy for such offenses is to continue one's regular chanting of the Holy Name, and take shelter of Him with all earnestness."

"If one becomes determined, and continues his chanting of the Holy Name, and does not give up the process of chanting, the Holy Name will remove all his sins, and grant to him, the most valuable spiritual benefit."(Padma Purana)

With this in mind one will have to do whatever it is that is necessary to rigorously begin the concentrated and prolonged chanting of the Holy Name. Bhaktvinoda Thakura recommends that if the mind is distracted then one should cover ones head with a blanket.

"Another effective method for ridding oneself of apathy towards the Holy Name is to sit in a closed room alone and meditate on the Name as did the previous sages. Or one can cover the head and face with a cloth and concentrate on the sound of the Holy Name. This will immediately fix the mind firmly on the Holy Name; slowly, one develops attraction for the Name, and the offense of apathetic inattention will vanish. (Harinama-cintamani Ch.12)

Other recommendations for effectively chanting of the Holy Name are given by Bhaktivinoda in Harinama-cintamani as follows: 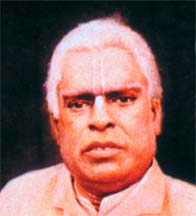 "One must make it his daily routine to chant for an hour in the company of saintly Vaisnavas in a sacred, undisturbed place. Taking note of the Vaisnavas' devotional attitude and their relish for the Holy Name, the neophyte should try to emulate this mood and gradually rid himself of his apathy to chanting. Step by step, his mind and attention should become fixed in the Holy Name. By constant chanting, the sweetness of the Holy Name makes him anxious to taste more of that nectar."

"Advanced Vaisnavas advise that chanting is best performed in the presence of Tulasi-devi and in a place of Lord Krsna's pastimes. The chanter should always seek the association of saintly devotees and emulate their discipline. He must follow in the footsteps of previous acaryas in the joyful method of worshiping the Lord through His Holy Name. He may begin with an hour of such chanting, then two, then increase it to four until finally he will chant not less then three lakhas [192 rounds of japa] of Holy Names a day. This helps him to soon sever his links with materialism." 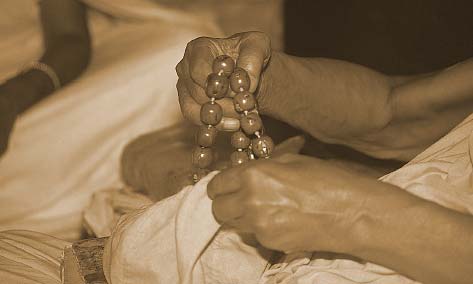 "One must diligently complete the chanting of the daily prescribed number of Holy Names according to one's vow.  But another kind of distraction occurs when one is too eager to complete the fixed number of Holy Names even at the sacrifice of quality. One must therefore always insure that he chants his rounds sincerely. Also, one should better improve the quality of his chanting rather than try to increase his daily number of rounds for show. The Name of the Lord should always be pronounced distinctly. Only by the grace of the Lord can this be achieved. Thus one should pray to the Lord that he never falls victim to the wiles of the illusion of distraction, and that he can continue to taste the full nectar of the Holy Name."

"The order of discipline (sadhanakrama) for realizing the identity of the Holy Name with the Lord is as follows. The devotee must in the beginning discard the ten offenses and simply absorb himself in the Holy Name by chanting constantly. He should distinctly pronounce the Holy Name and meditate upon the transcendental sound vibration.  When his chanting is steady, clear and blissful, he will be able to meditate upon the Syamasundara form of the Lord.  With chanting beads in hand, he should thus seek out the transcendental form of the Holy Name, which will appear when his vision is pure."

"Next, he goes on to practice the remembrance of particular pastimes of the Lord. This remembrance, called mantra-dhyana mayi upasana, facilitates further absorption into the Holy Name. This lila-smarana or pastime-meditation also gradually becomes one with the Holy Name, form, and qualities."

"At this point, the first rays of nama-rasa, or the transcendental mellow of the Holy Name, dawn on the horizon of perception. Chanting the Name in great delight, the devotee sees Krsna surrounded by cowherd boys and girls under a desire tree at the Yogapitha. Progressively, the devotee's practice of lila-smarana intensifies to the point where he begins to meditate on the most confidential pastimes of the Lord known as the asta-kaliya-lila, or the eightfold pastimes of Radha and Krsna. When he reaches maturity in this meditation, rasa rises in full glory. (Harinama-cintamani chapters 12 and 15)

The neophyte [kanistha] devotee may try to employ yoga techniques and other such practices while chanting the Holy Name, but for the madhyama-adhikari devotees no such techniques are required. Avoiding the ten offenses to the Holy Name the madhyama-adhikari devotee becomes absorbed in the Holy Name thru proper association [sadhu-sanga], service [seva], hari-katha [philosophical discourse] and accepting responsibility [sannyasa] under the guidance of sri-guru, the spiritual master.

Association and service quickly absorb the mind of a devotee and all wandering tendencies are easily checked. The path of the madhyama-adhikari is long and strenuous. During this period of spiritual development it is imperative that the devotee pay close attention to the devotional philosophy and the opinions of sastra and sadhus.

Madhyama-adhikari means proper adjustment and proper conception – accepting and rejecting those things favorable and unfavorable for devotional service. To this end a proper understanding of Vaisnava philosophy is crucial. Mental speculation and dry philosophical arguments have no value in progressive Krsna consciousness but Vaishnava siddhanta, axiomatic truths received through divine revelation, are essential for understanding.

Throughout the Vedic literature, Krsna's guna, rupa and lila in Vrndavana are proclaimed as qualitatively and quantitatively greater than those of His other incarnations such as Narayana, etc. Therefore the devotees of Krsna choose places such as Mayapura, Jagannatha Puri and Vrndavana as their preferred place of bhajana [practicing devotional life] and absorb themselves in Krsna's nama, guna, rupa and lila in such places.

In the event that one cannot live in such holy places one should then reside in a place made holy by the presence of the Deity and advanced Vaisnavas – but living alone in an unholy place is never recommended by those who know the science of Krsna Consciousness.

Although japa is certainly an important aspect of the practicing life of a devotee, the equal and even superior process of kirtana and sankirtana should not be overlooked or underestimated. Kirtana and other such forms of congregational chanting (such as preaching, writing, and book distribution), when led by a pure devotee, are fully absorbing and purifying. Kirtana is highly recommended by our acaryas and in kirtana the mind is easily controlled.

"Internal remembrance (smarana) can occur by the power of kirtana, and only then is solitary (nirjana) service possible." (Srila Sarasvati Thakura – Vaisnava Ke)

In fact in any stage of Krsna Consciousness – whether you are a kanistha, a madhyama or an uttama-adhikari the process of kirtana and sankirtana is recommended and highly fulfilling.