Hare Krishna. I thought you might like to know a little bit of the untold side of Nelson Mandela. He came several times to ISKCON's Ratha Yatra in South Africa while he was president of the nation. The first time Bhakti Tirtha Swami met him, in the course of their conversation, Maharaja quoted a Gita verse. Half-way thru the verse, Mandela quoted the rest of it. BT Swami was surprised. He asked "You know the Gita?" Mandela said "Try me." Every Gita verse Bhakti Tirtha Maharaja knew, Nelson knew as well.

Naturally, Bhakti Tirtha Swami asked "How is this?" Nelson Mandela explained that he was imprisoned on Robbins Island along with some of his fellow leaders of their political party, the ANC. One of them was an Indian-bodied lawyer. The South African government tried to break them by giving them mindless labor and routine. Realizing that they needed to keep their minds actively engaged, the Indian lawyer taught Nelson Mandela Gita verses which they quoted and discussed back and forth to transcend their daily drudgery. Nelson Mandela told Bhakti Tirtha Maharaja that learning the Gita helped keep him sane and did much to infuse his view of the world and his strategies for bringing independence and a better future for the South African people. 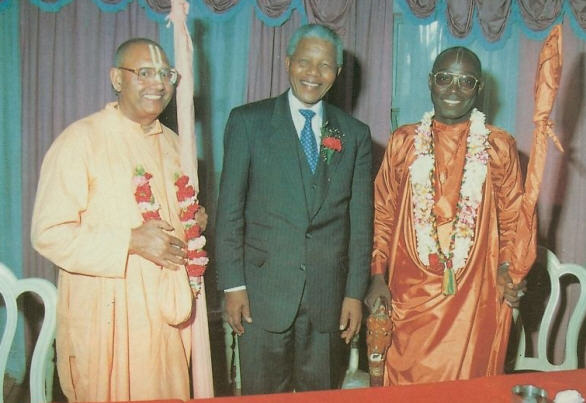