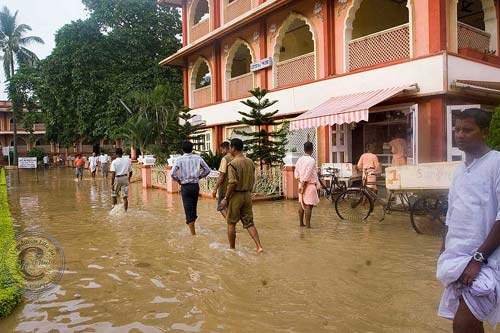 With great regret we wish to inform the community of devotees about the disappearance of Srimati Gauri dasi, the granddaughter of Srila Prabhupada, her three years old daughter Yamunangi, and her brother-in-law, Sriman Sri Hari dasa.

Gauri dasi leaves behind her husband, Sriman Sujitendriya dasa, a Mayapur gurukula graduate who has lived in the ISKCON Mayapur community his whole life, and her youngest daughter, Bhagirathi aged ten months.

These three devotees were tragically drowned in a boating accident in Sri Mayapur dhama at sometime in the early afternoon on Wednesday 27 September, 2006.

The tragedy occurred on a flooded stretch of road on the way to the Yoga-pitha, nearby where Sujitendriya and his brother Sri Hari were building a house.

Because of the floods Gauri had rung her father Sriman Vrindavan Candra De, and he advised her to come to their family home in Kolkata until it receded. Thus, Sujitendriya, Gauri and their two daughters, Sri Hari and several others were waiting for a boat to leave Mayapur. Instead of the boat they expected, a smaller one came and offered to take them so everyone, about twelve or fourteen persons, agreed to use it.

Their route followed the flooded road leading to the Yoga-pitha. The current was running strong at ninety degrees to the road, so about six of the men got out to push and guide the boat along from the front and back. Gauri and the two children, along with their maid, were sitting in the boat with six others, plus the two boatmen.

Due to the powerful current somehow the boat got out of control and it sank into the water pitching the occupants into the flood. Gauri couldn’t swim and Sujitendriya grabbed her and their daughter Yamunangi, but both were going under. To save all of them from being swept away Sujitendriya grabbed hold of a banana tree with one hand. With the other he was hanging on to his wife Gauri in a desperate attempt to save her. But by this time she was fully submerged and unconscious.

They were pulled out onto the bank and an Australian devotee, Shanti Parayana prabhu, attempted to revive Gauri with CPR. After some time however it was clear the attempt was not successful.

Yamunangi had also expired in the arms of her father.

Sri Hari prabhu went to save the youngest daughter Bhagirathi and the maid. He succeeded in doing this but in the attempt, although he was a good swimmer, he was also dragged under and drowned. He died a hero, saving others while giving his own life.

While we lament the loss of the association of these devotees, there can be no inauspiciousness for them. They fulfilled their life’s purpose and left their bodies in the heart of Sri Mayapur dhama in the bosom of Mother Ganges. Most certainly they all three went home back to Godhead. What more can one desire? 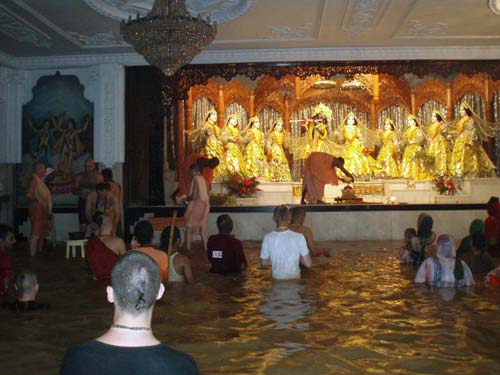 "O brother! One who resides in the land of Navadvipa is greatly fortunate, for he obtains pure love for Krishna. Whosoever goes at any time to visit Navadvipa becomes freed from all offenses. Whatever a pilgrim obtains by wandering to all the holy places is obtained simply by remembering Sri Navadvipa. This all the scriptures sing.

A person who simply sees Navadvipa gets the great fortune of love for Krishna birth after birth. Even one who practices karma- or buddhi-yoga never again takes birth if he goes to Navadvipa.

If a person wanders in Navadvipa, at every step he obtains the result of ten million horse sacrifices. That too is stated in all the scriptures.

If anyone resides there and chants his given mantra, that mantra becomes Lord Caitanya, and so he is easily delivered.

What yogis obtain in other holy places after ten years of practice is obtained in Navadvipa by practicing for only three nights.

We request all the devotees to give their blessings and prayers for the departed Vaisnavas, and also their support to Sujitendriya prabhu so that he can overcome his loss, raise his daughter Bhagirathi nicely in Krsna consciousness, and continue to progress in his devotional life as a resident of Sri-dhama Mayapur.