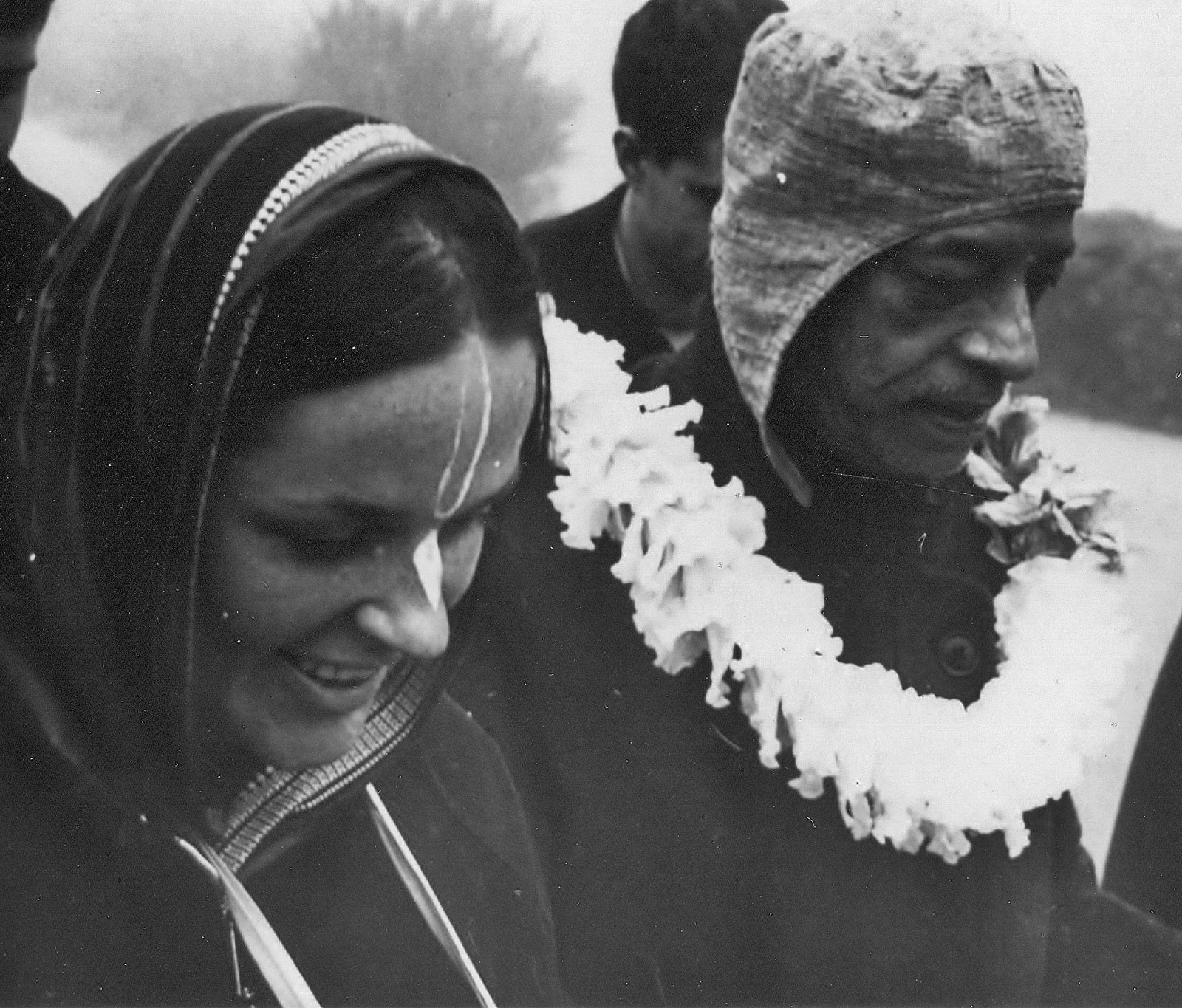 What a week of Vaisnava sadhu-sanga this has been! I leave the richer, having exchanged with my family members, old and new, god brothers, god sisters, nephews and nieces. While I feel most unqualified to speak to you today, I am honored and privileged to join my god sisters in voicing my concerns as a woman in ISKCON.

As the GBC body, all of you are responsible for establishing Srila Prabhupada’s legacy, which, in these difficult and turbulent times, is at stake. One realm of that legacy – the rapport Srila Prabhupada established with his Vaisnavi disciples – is the topic of our discussion today, because over the years since his disappearance it has been largely forgotten. Perhaps my personal service and association with him, along with his later guidance and instructions, will offer some insights in this area.

As a strong and independent young woman I met Srila Prabhupada in 1966 and took initiation in 1967. Had Srila Prabhupada demanded conformity to orthodox roles for women as a condition of surrender, I, along with many of my god sisters, would probably not have joined ISKCON. That he did not is testament to his spiritual vision. He lovingly encouraged and engaged us in the service of the sankirtana movement, and he consistently revealed himself to be panditah sama-darsinah – equal to all.

In both men and women, Srila Prabhupada observed our propensities and expertly dovetailed them in his preaching mission. For many years, in different countries and circumstances, I had the good fortune to render personal service to him. He trained me, urged me to accept more and more responsibility, and regularly asked me to lead kirtanas, give classes, arrange programs, manage departments, provide comforts for visiting devotees, meet with leaders, and actively promulgate Krsna consciousness. In ISKCON India, where previously no women were allowed, he sent me to various temples to learn cooking and Deity worship, and he repeatedly asked me to train others.

It would take much longer than the limited time I have here to give you a glimpse into the numerous exchanges that illustrate Srila Prabhupada’s demeanor and mood. However, one such exchange is what I call the Canakya Pandita episodes. I was present on four occasions when Srila Prabhupada repeated the Canakya adage: “Never trust a woman or a politician.” On each occasion Srila Prabhupada looked me in the eye to see my response. On the last occasion, in Bombay in 1973, he quoted the saying while heartily laughing in front of a small group of men. Then he said, “What do you think, Yamuna?” Immediately I retorted, “Of course it is true, Srila Prabhupada,” whereupon he became grave, looked at me with great feeling, and said, “but you are not a woman, you are a Vaisnava.”

Another series of exchanges centered on leading kirtana. Srila Prabhupada often had me lead the first kirtana before he spoke at a program, whether in front of twenty people or ten thousand people. There were occasions when I felt uncomfortable with this. At the Jaipur pandal at Radha Govinda temple, I refused to lead kirtana. Srila Prabhupada called me over and said, “Lead kirtana.” I said, “I can’t. My throat hurts.” He said, “No. Lead kirtana.” So croaking like a frog, I led kirtana.

In late 1974, not long after I had left my householder asrama, Srila Prabhupada pronounced it “good that you have left your husband” and encouraged me to become a “sannyasini”. Although I was not in the traditional role of being protected by my father, husband or son, in both his personal darsanas and written instructions, Srila Prabhupada offered me unfettered encouragement and astonished me with unexpected answers to my questions.

After settling in Oregon with my god sister Dinatarine, Srila Prabhupada, while pronouncing us “independent” to a concerned god brother, at the same time twice rebuked us when we approached him to leave. “You westerners are so restless,” he admonished. “Why can’t you remain in the same place? Stay where you are.” We questioned, “But Srila Prabhupada, they are saying that if we aren’t in ISKCON, we lose your blessings and cannot make advancement.” Prabhupada replied, “ISKCON is where you are chanting the holy name – that is ISKCON.” We rejoined, “They are saying we don’t have any association here and are therefore in maya.” He replied, “Association can be two or two hundred. If you are two and compatible, you can become perfect in Krsna consciousness. If you are 200 and are not, then no one will make advancement.”

To conclude, Srila Prabhupada trained me to be concerned about his movement, and at this time I am deeply concerned. Now more than ever, it is time to revive and imbibe Srila Prabhupada’s mood with his disciples. If we neglect this, an aspect of his greatness will remain unknown to future generations.

I appeal to the GBC that along with the laudable projects you are managing and those you are contemplating – especially the magnificent temple that will arise here in Sridhama Mayapura – consider that the behavior of the ISKCON devotees who participate in these projects must also be magnificent. Any other behavior will make the projects less than worthy of Srila Prabhupada’s name. This grave responsibility falls on you. In other words, let us instill in every person who comes into contact with Srila Prabhupada’s movement the healthy spiritual relationships that he had with his followers – his mood of encouragement, protection and kindness.

The closer we come to individually appreciating and honoring Srila Prabhupada’s personal dealings with his disciples, the closer we will come to his sense of completeness in Krsna consciousness, to his joyfulness, to his transcendentally attractive nature.

With great care, our service is to create a devotional environment where men, women and children can thrive in Krsna consciousness, rendering service according to their desire and inclination. Our service is to empower rather than inhibit the service propensity in others.

Finally, let us search our intelligence and hearts for ways to help the women who are sincerely looking for spiritual life. Without properly nurturing them, we as a society have no future. Women in Krsna consciousness are an intricate, essential part of Srila Prabhupada’s legacy. In our effort to move forward, let us not put Srila Prabhupada’s example behind us, but in front of us – our divine beacon – to guide us together towards the lotus feet of Sri Sri Gaura-Nitai and Sri Sri Radha-Krsna. 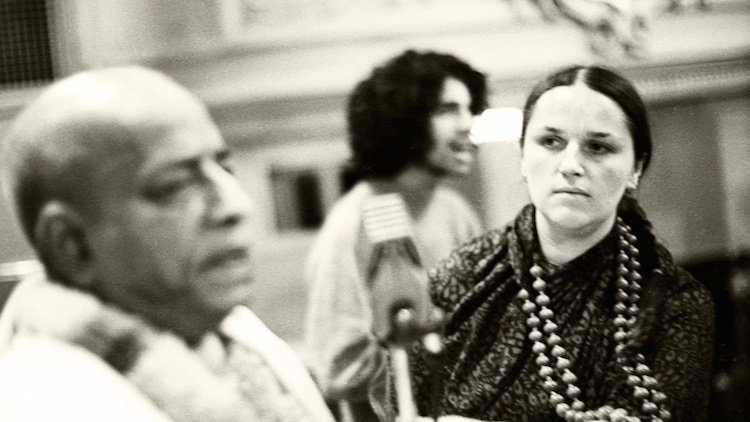