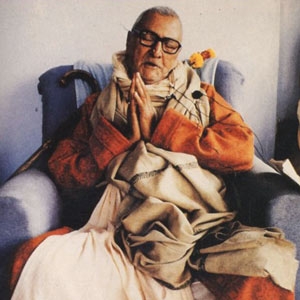 Gadadhara Pandita, Radharani and Rukmini, they are of the same line, and that was represented by Gadadhara Pandita in Gaura-lila. In Gaura-lila the bhava, the sentiment, the mood, the emotion of Radharani was taken by Mahaprabhu Himself, Krishna Himself. So, Gadadhara Pandita, Radharani, was emptied. His everything is drawn from him, and he holds a shadowlike position in Gaura-lila. And Rukmini’s characteristic was maintained there. Sober, considerate, patient; all these things, all these qualities remained there in him and so sometimes it is told that he is the Rukmini avatar, the avatar of Rukmini. But really, his position was that of Radharani.

Just like a shadow he cannot leave Sri Gauranga. Wherever Sri Gauranga is going, he is following from a distance. He does not know anything but Gauranga. But still, he is not seen to come forward. Always in the back. Krishna and Radharani are born in the middle of the new moon and the full moon. But Mahaprabhu took his birth in the full moon. Gadadhara Pandita appeared during the new moon. New moon means no moon. The full moon was taken by Mahaprabhu, and new moon, or no moon was taken by Gadadhara Pandita. Gadadhara is master of everything, but still here he has given everything to his master, and he is empty. He is empty, he is playing in such a way his part, Gadadhara Pandita. His is the highest position of sacrifice.