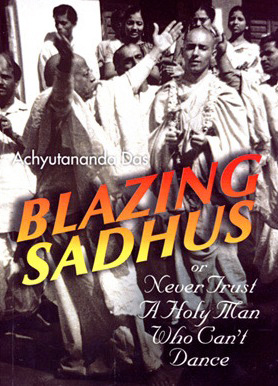 In his review of the 1974 Mel Brooks satire, “Blazing Saddles: Or Never Give a Saga an Even Break,” famed critic Roger Ebert called the film “a crazed grabbag of a movie that does everything to keep us laughing except hit us over the head with a rubber chicken.” In that respect, Achyutananda Das’ romping memoir and the cinematic source of its clever title are not dissimilar. The pages of Blazing Sadhus are peppered with jocular observations, risqué innuendos, and episodes of deep seriousness that at times read like a combination of literary free jazz and devotional vaudeville. As if trying to keep pace with a driving backbeat (and adhere to a strict page limit), Achyutananda riffs on themes as varied as Gaudiya siddhanta and bowel movements, pivoting sharply between themes without rest. Yet like an accomplished musician—and Achyutananda is indeed one—he manages to weave his brash and sometimes frenetic literary solo around a more melodic line: that of his devotion to his guru, A.C. Bhaktivedanta Swami Prabhupada.

Achyutananda’s (nee Charles M. Barnett) loose narrative has its beginnings in the cultural milieu of 1960’s Greenwich Village, a time and locality now so romanticized and clichéd that his satirical treatment of beatnik philosophy comes as a relief. Although Charles is a participant in the New York counter-culture, within a few pages we share in his eagerness to slip away to the comparatively unhip Lower East Side to see what an unassuming Indian swami might offer in the way of alternative wisdom. Whereas in “The Village” Charles moved with a pre-celebrity crowd—Bill Cosby, John Coltrane, Lenny Bruce—it turns out that a person of even deeper cultural consequence awaits him in a storefront beneath a sign reading “Matchless Gifts.”

26 2nd Avenue may be the most famous street address in Gaudiya Vaishnavism, and Achyutananda brings us back to those humble premises and Srila Prabhupada’s adjoining apartment with recollections of the earnest (if not always adept) service of a small corps of dedicated students and their fledging efforts to live and share the swami’s teachings. Although this time period will be familiar to readers of Srila Prabhupada Lilamrita, the multi-volume biographical work by Satsvarupa das Goswami, here Achyutananda’s candid tone is especially effective at conveying his and fellow students’ first steps (and missteps) in devotional Vedanta. More importantly, he casts Srila Prabhupada in intimate and human terms that both charm readers and stand in contrast to writings about Prabhupada that—certainly by comparison to Achyutananda’s telling—emphasize discipline and rules more so than love and flexibility. As Achyutananda shares culinary adventures, improvised initiations, and scrambling efforts to produce literature, we witness a physically cramped apartment and storefront unfold into a vast field of spiritual activity, made spacious by shared affection between a teacher and his students.

Among early episodes, Srila Prabhupada’s pragmatism stands out. This is especially true as it concerns the early development of an institution to support and organize preaching and publishing activities. When proposing the formation of the International Society for Krishna Consciousness (ISKCON), Prabhupada states simply that the group can be “dissolved” if it does not serve to advance the intended mission. In another instance, his students ask if an initiate might be named “Iskcon das.” Prabhupada responds with an emphatic “No.”

Blazing Sadhus takes an international turn when Charles (now Achyutananda Das) is invited by Srila Prabhupada to accompany him on a visit to post-independence India, a nation nearly as youthful as Achyutananda on paper, yet far more ancient in every other respect. Achyutananda’s stories from the holy dhamas of Vrindavana and Navadvipa at a time when both were free of apartment towers and vehicular traffic may make even younger practitioners feel nostalgic. But the absence of divisions between the spiritual leadership and students of various Gaudiya missions and ISKCON may be the most attractive aspect of the moments in history and the attendant mood captured by Achyutananda.

We join Achyutananda in his visits to mathas and missions as he meets Narayana Maharaja, Bon Maharaja, and B.R. Sridhara Maharaja, among others. It is here especially that Blazing Sadhus, while decidedly non-political (and seldom politically correct), intentionally or not makes a strong statement about the condition of Gaudiya Vaishnavism today, particularly as it relates to siksa and the free flow of faith across now-rigid institutional boundaries. Srila Prabhupada puts Achyutananda Das in the spiritual care of his godbrother, Sridhara Maharaja. Regarding hearing from Prabhupada’s godbrother, Achyutananda remarks, “Although his voice and appearance were very different from Swamiji’s [Prabhupada’s], the strength of the meanings in his words felt the same.” While the book skirts difficult history, we might hope that the veranda sermons parlayed beautifully in Blazing Sadhus will prompt readers to seek further insight into the intimate relationship between Prabhupada and Sridhara Maharaja.

As Achyutananda moves across India in the service of sri guru-parampara, we become privy to a time when Gaudiya Vaishnavism, though perhaps smaller in turns of numeric participation, temple infrastructure, and financial resources, feels more spacious. We see siddhantic unity and a diversity of presentation, and a small world made big by the spiritual relationships that tie Prabhupada and his students to the broader Bhaktivinoda parivara. We also get a glimpse of some of the most intimate and therefore substantial moments in the development of Prabhupada’s own organization. For example, when Srila Prabhupada assesses the completion of a basic cottage in Mayapura built for him and several students—a humble architectural achievement compared with today’s projects in the dhama—he surveys the outcome with satisfaction: “A cool cottage. It shall be named Achyutananda Cottage.” Taking in this sweet episode, the reader may feel that the tiny dwelling was one in which “the whole world could live,” its walls knowing no bounds in the face of Prabhupada’s affection. What heart would not melt in proximity to such blazing krpa?

While Achyutananda’s book is a memoir, it is also a vehicle for bringing out the teachings of Srila Prabhupada and the other acaryas and sadhus whom Achyutananda encounters in the service of his spiritual preceptor. Unfortunately Blazing Sadhus is not a book that will find an audience outside of the community of practicing devotees (unlike Radhanath Swami’s The Journey Home). With substantial editing and rewriting, the work could perhaps be reconceived along more accessible lines and enjoy some crossover appeal. Although Achyutananda may have the experiential and intellectual chops to write such a book, Blazing Sadhus will not be the piece of personal writing (still not manifest in the Gaudiya world) that combines a compelling narrative with unambiguous philosophy in a way that might engage broad, educated readership.

Fortunately for his insider audience, however, Achyutananda’s literary flair carries over into his presentation of siddhanta. At a minimum he couches familiar points in new language and at his best Achyutananda’s insights and realizations exhibit his deepening faith and maturation in bhakti (and, incidentally, make his occasionally juvenile humor pop out to greater effect). Particularly strong is his writing on the inner meaning of the Ratha-Yatra festival and the descending process of “Vaishnava Tantra.” It is apparent here and in other philosophical plunges that Achyutananda has not only listened well to Srila Prabhupada and Srila Sridhara Maharaja, but also taken the teachings to heart in the most meaningful sense of the expression.

On balance, Achyutananda’s memoir is a deeply personal book (as memoir’s should be) in which the character of the writer it not hidden or subsumed by linguistic platitudes or overly reverential language. Achyutananda’s deep reverence for Prabhupada, however, is in no way diminished by Blazing Sadhu’s occasionally irreverent tack. If anything, Achyutananda’s genuine tone pairs beautifully with his sincere discipleship. We might hope to hear more from Achyutananda Das in the coming years, especially at a time when other, less humanizing versions of Srila Prabhupada and his early mission may otherwise become the standard narrative. In that respect, Achyutananda’s voice—trained as it is in devotional music, and supported by obvious realization—is a welcome one, even if Blazing Sadhus muffles a few political low notes and plays with greater comfort in a higher, comedic register.