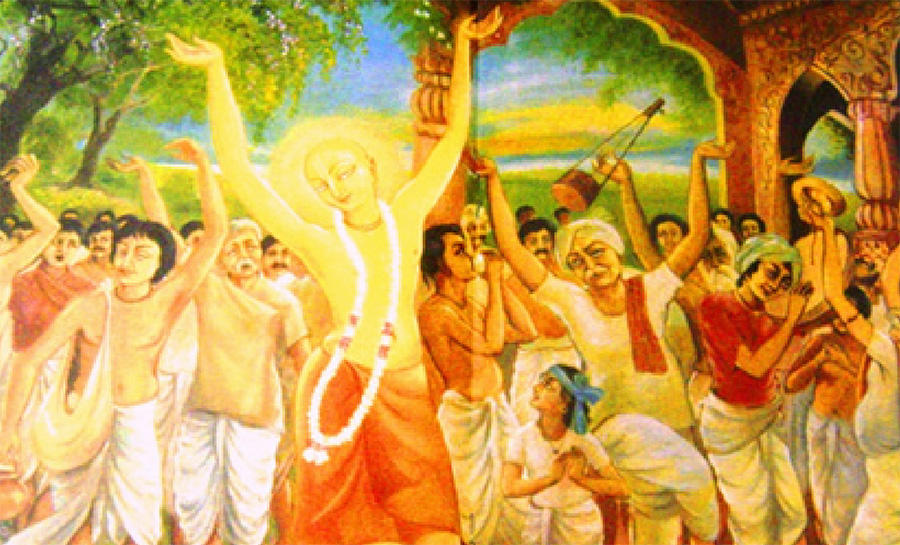 Supreme Lord Sri Chaitanya Mahaprabhu would always perform Sri Harinam Sankirtan in the house of one of His devotee, Srila Srivas Pandit.

One day, Sri Srivas’s only son died while sankirtana was being performed in his house. Sri Srivas was afraid that the sounds of mourning from the women’s quarters would disturb Sri Mahaprabhu while He was engaged in singing the Holy Names. So he went directly into the house and tried to quiet the women by explaining spiritual truths to them. When they still didn’t stop their loud lamentations, he threatened to throw himself into the river and drown if they did not stop making noise. This had the desired result.

Later on that night, however, the kirtan came to a stop and Sri Mahaprabhu said, “Something doesn’t seem right. Has some tragedy taken place in the pandit’s house?” Sri Srivas answered, “How can anything be wrong, when I have Your smiling face in my home?”

“However, some of the other devotees said, “Prabhu, Srivas’ only son died in the evening about an hour after sunset.”

Mahaprabhu asked, “Why did no one say anything before now?”

The devotees answered, “Lord, Srivas told us not to, because he was afraid that it would interfere with Your pleasure in Sri Harinam kirtana.”

Sri Mahaprabhu said, “How could I ever abandon devotees who love Me to this extent!”. After this, He went inside and sat down beside the child’s dead body and brought him back to consciousness. He asked, “Child! Why do you want to leave the house of such a great devotee as Srivas?”

The dead child answered, “The few days that I was to spend in Sri Srivas’s house are over, and now I am following Your wishes in going elsewhere. I am a living being without any independence; I cannot go against Your wishes. Please be merciful to me that I never forget Your lotus feet, wherever I go.”

When Srivas’ family members heard the child speak such wisdom, they immediately forgot their distress and stopped mourning.

Sri Mahaprabhu said to Sri Srivas Pandit, “From this day on, Nityananda and I will be your sons. We will never leave you.”

Source : Lord Chaitanya and His Associates.