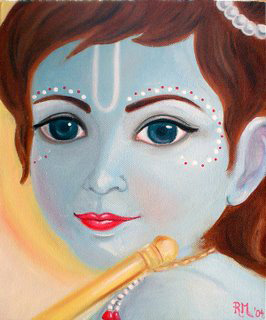 Carrying forth the topic of last issue, we will try to present the conclusive definition of the Dharma according to the bona fide authority of Vedic Scriptures. Just to recap, Dharma doesn't mean a system of faith (or beliefs) but the innate quality of an entity which cannot be separated from the possessor.

This can be illustrated by the example of fire. Heat and light are the innate quality of fire, thus dharma of fire is to heat and illuminate. Coming to Dharma of a person, we would have to delve into the nature or that quality which is common to each one of them. Upon careful analysis and rule of discrimination by exception, it can be safely concluded, that the dharma is Service. Each and every person is serving someone or other.

There are so many examples. A wife serves a husband by keeping the house in order and the husband serves the other family members by earning money and livelihood. The children serve their parents by following their instructions. The executive serves the senior executive who in turn serves the area manager who in turn serves the zonal manager. This goes on to country head, regional head, global head, CEO, Chairman who in turn serves to the interest of shareholders whose numbers might spill on from few thousands to few lakhs. Doesn't matter who one is serving, but without exception all are serving.

On being asked by Sri Caitanya Mahaprabhu about his identity, Ramananda Rai replied,

"The eternal constitutional position of each living entity is being the servant of Krishna." Serve we must, whether dog or god, the decision rests on us. In the modern world of distant and cold relationships many are left without the loving care of family, no one to serve. Such people find solace to their heart by serving the animals. Keeping pets is one of the top suggestions given by psychologists to their mentally disturbed or depressed patients. Because by serving their pets, their dependents, they feel the fulfillment of their purpose of existence. The moment the realization that our eternal constitutional occupation is "service" dawns upon, the next question is "Who to serve?" If our dharma is to serve then who is that person to be served which serves to our best interests. Knowingly or unknowingly we all are serving someone, but due to ignorance we do not know who to serve. The decision to select a master is a crucial one. An ideal master possesses qualifications like, merciful, affectionate, aware of our needs and desires, capable of providing livelihood, capable of providing protection and tolerance amongst others.

None other than the Supreme Lord fits this description. None other than him is capable of maintaining our lives, giving us protection, tolerating our repeated offences and mistakes since time immemorial.

Being the supreme controller of all the planets and the enjoyer of all, and best friend of all living entities, who better than Krishna to strike a deal with? Krishna himself declares himself to be our best benefactor. The same sentiment is expressed by Sri Caitanya Mahaprabhu when he says,

tomare loiter ami hoinu avatara, ami bina bandhu ara ke acche tomara
"I incarnate for your deliverance, who can be a better well-wisher than myself?"

The master-servant relationship in this world is based on exploitation. The master maintains the servant so that he can exploit the servant for his own nefarious or not-so-nefarious acts. The moment the servant is incapable of serving, the pay cheques stop. But the master-servant relationship between Krishna and his devotees is transcendental. It is not based on exploitation, but based on love, the intense desire to please each other without any motivation. In advanced stages, the love becomes so thick that the identity of the served and the server interchanges naturally.

There are many examples of this in our Vedic scriptures, where the Supreme Master, the master of infinite universes, kindly agrees to be bound by the love and service of Krishna and himself becomes the servant of his servant. This was illustrated by Krishna around the time of the great battle of Kurukshetra. First he became a messenger for his dear Pandavas. Remember the post of a messenger is significant, but nonetheless he remains the servant. But Krishna graciously accepted it. Further on he became the chariot-driver for his devotee and friend Arjuna who was devoid of any enviousness. Krishna also displayed this sentiment when he served his old friend Sudama Vipra in his capital city of Dwarka.

So who do we want to serve, the mean, business minded bosses of this world or the most benevolent and affectionate and capable boss – Krishna? The power to decide rests with us. In our next issue, another take on dharma. A different perspective.