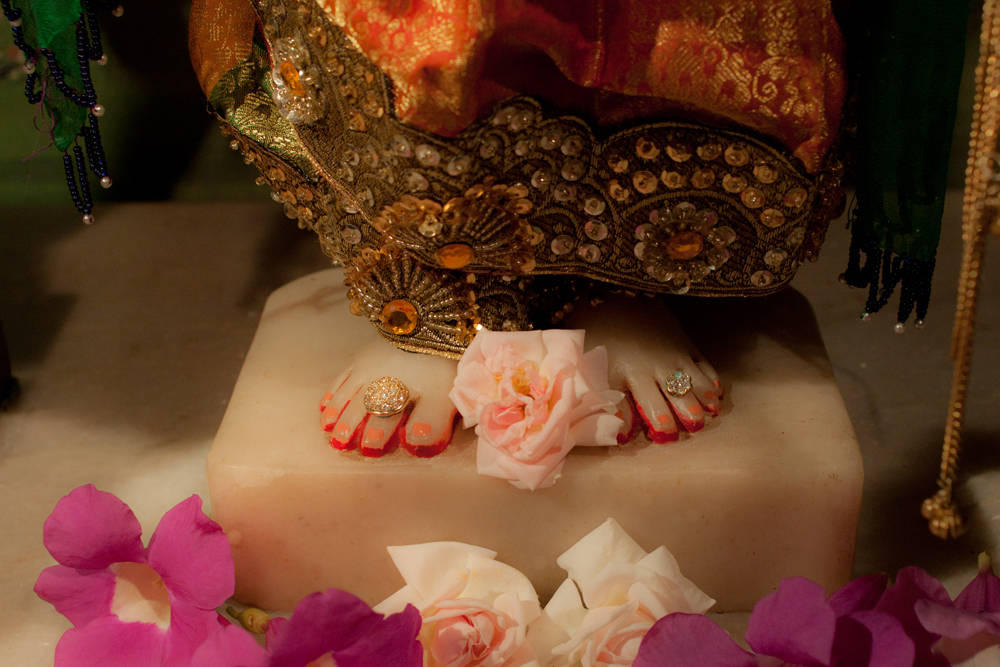 by Swami B. A. Ashram

The month of Kartika is particularly beloved by Gaudiya Vaishnavas partly because it is dedicated to Srimati Radharani, the embodiment of love for Krishna, and partly because of its many festivals celebrating Krishna’s pastimes in Vrindavana. Perhaps the largest of those festivals is Govardhana-puja, an occasion for remembering how Krishna protects his surrendered devotees. Another is the appearance of Radha-kunda, the most highly revered of all the places of Krishna’s pastimes, which sits at the foot of holy Govardhana Hill.

The eighth day of Kartika’s bright fortnight marks an important day in Krishna’s Vrindavan pastimes, his initiation as a full-fledged cow-herder. This day, known as Gopastami, is the day Krishna graduated from spending his days herding calves to herding the cows. Srila Jiva Goswami’s Gopala Campu describes the occasion of Krishna’s initiation as a cow-herder, marking his passage from boyhood to youth, in detail, and Swami B. V. Tripurari, drawing mostly on Gopala Campu, has written about this pastime here on the Harmonist.

On this same day Krishna’s devotees also remember another intimate pastime, often referred to as Subala Milana. On this day, many temples in Vrindavana, and now throughout the world, show the Deity form of Srimati Radharani with her lotus feet visible. On all other days of the year, Radharani, the supremely chaste Goddess of devotion to Krishna, keeps her feet covered. So how is it that she shows her lotus feet on this one day of the year? She does so almost inadvertently, by indirection, disguised as Krishna’s bosom friend Subala.

Among all of Krishna’s friends, Subala is perhaps the most intimate. He is the leader of the priyanarma sakhas, who act as accomplices in Krishna’s loving dealings with Radharani and the other cowherd girls of Vraja. Subala has a very fair complexion, like Radharani’s; in fact, his countenance very closely resembles Radharani’s.

One day Krishna felt so deeply the pangs of love for Radha that he was inconsolable in his separation from her. He called his dear friend Subala and said, “I can’t stand being away from Radha. You have to get her and bring her here to me!”

Subala, perplexed, replied, “How can I bring her out to the forest in broad daylight?” Radharani was kept from meeting with Krishna by vigilant elders, especially Jatila, the mother of her so-called husband. Jatila kept a close watch on Radharani day and night, and Subala worried about how he would be able to manage to spirit her away from her home.

Krishna was insistent: “You’ll figure it out. You have to manage it somehow or other!” Determined to satisfy his friend, Subala hatched a plan. He approached Radha’s home with one of his calves under his arm. As he got near the house, he set the calf down on the ground and gave its tail a quick twist, so it would run off. Then he approached Radha’s home.

Ever watchful and ever suspicious, Jatila called to Subala: “Say, what are you doing here? You’re that boy who is always hanging out with that rascal Krishna. You boys are undoubtedly up to no good. You get out of here right now!”

“No, no—you’re mistaken, dear mother,” Subala protested. “I’ve lost one of my calves. His mother is causing quite a stir, moaning in separation from her baby, and I just want to bring him back, like a good cowherd.”

Jatila, despite her suspicion, was persuaded. “Well, I don’t see you your calf could find its way all the way here from Nandagram, but have a look anyway. You’ll see that he’s not here.”

Subala took advantage of the situation, went into Radharani’s home, and told her the situation. They exchanged clothes, and, while Subala remained in Radha’s room disguised as her, she, dressed in Subala’s clothes, took the small calf in her arms and headed for the forest, nodding farewell to the unsuspecting Jatila and smiling to herself in anticipation of meting Krishna.

She approached Krishna at the appointed rendezvous. She looked so much like Subala that Krishna didn’t recognize her and feared that Subala had failed in his mission. Srila B. R. Sridhara-deva Goswami describes their meeting in The Loving Search for the Lost Servant:

At last, when Radharani saw Krishna, She approached Him in the garb of Subala. Krishna was mad. He could not detect that Radharani had come, but mistook Her for Subala. He said, “Oh, Subala, you have come back without Radharani! Couldn’t you bring Her?”

Radharani began cutting jokes: “No”, She said, “lt was impossible for me to bring Her in the daytime.”

Krishna said, “Then what am I to do? I can’t tolerate My life any longer.”

Radharani said, “If You say so, I can go to Candravali and bring her.”

“No, no,” Krishna said, “Curd cannot satisfy the thirst for milk. It is not possible!” Krishna was faint with disappointment.

Then Radharani embraced Him, saying, “My Lord, can’t You recognize Your maidservant? You failed to recognize Me!” Then Krishna was again full of joy.

We may understand, then, that the rare opportunity to see Srimati Radharani’s lotus feet is due to a sort of trick and is connected with an intimate pastime that is certainly difficult for ordinary people to fathom. We may be able to appreciate this to the extent that we have taken shelter of the process of bhakti as taught by our spiritual masters coming in the line of disciplic succession, the guru parampara. During the month of Kartika, known as Radha’s own month, devotees pray to her for greater devotion to Krishna. This month affords a special occasion each day to gain the favor of Bhakti Devi, Radharani, by deepening our commitment to the processes of devotional service such as hearing, chanting, and remembering the glories of Krishna’s divine names, beauty, character, and pastimes. As the end of the month approaches, Radharani’s accepting Subala vesa is one of the sweetest such occasions.