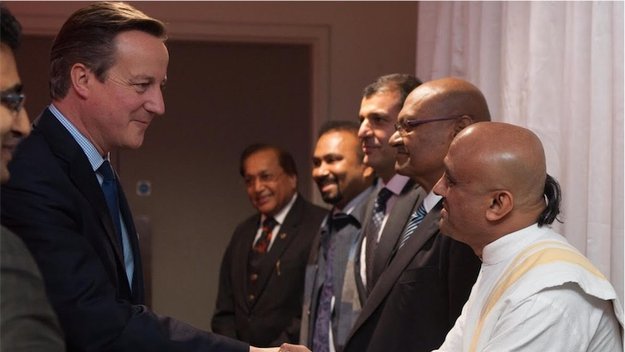 Photos released today show Srutidharma Das shaking hands with both Modi and Cameron at a special showcase event held at Wembley Stadium, which featured a performance of both the Indian and British national anthems by children from the Krishna Avanti Primary School amongst others, and was attended by thousands.

David Cameron also met and shook hands the children from Krishna Avanti, a flagship Conservative free school, and sat with them in the VIP area, which was an unforgettable moment for them.

Srutidharma Das spoke to Narendra Modi in Gujarati about ISKCON’s 50th anniversary next year, for which he offered heartfelt congratulations. Modi also spoke about his visit to Bhaktivedanta Manor in 2005. Upon meeting Srutidharma Das, David Cameron said “We meet again!” as Prabhu had only recited Diwali prayers at No 10 few days earlier. He also commented on the mangal arati sweets which were given as a gift to the Prime Minister and Mrs Cameron, who had worn a sari for the occasion, which his children enjoyed immensely.

Srutidharma Das said: “We were absolutely delighted to be part of this historic event – it was a milestone for the UK and India, and ISKCON were right at the very heart of it.”