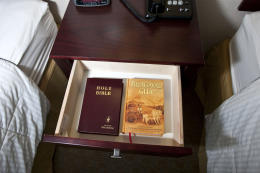 Pull open a drawer in some Houston hotel rooms, and beside your room-service menu and Gideons Bible, you might find a copy of the Bhagavad Gita. The sacred Hindu text is making its way into nightstands across the country through a campaign to spread the scripture and awareness about Lord Krishna, the deity believed to have spoken the philosophical teachings millennia ago.

A local Hare Krishna temple has placed about 7,000 copies of the Bhagavad Gita in more than 100 hotels and motels in the area.

The project has been successful because of the number of Indian hotel owners who are familiar with the text and happy to place copies in their rooms as a way to share the universal truths of their faith.

Indian-Americans make up about 5 percent of the population but own about 40 percent of hotels and motels in the country, according to the Asian American Hotel Owners Association.

The Best Western at Interstate 290 and FM 1960 was one of the first local properties to provide the Bhagavad Gita to visitors. According to owner Alex Patel, the project has worked well in his 57-room motel so far.

"People get to read a different kind of holy book, and they like it," Patel said. Guests ask him questions about the story from time to time, and he assures them they can take the text with them.

Across Houston and its suburbs, the Bible is about as familiar and accessible as a phone book, but most people haven't heard of the Bhagavad Gita and probably can't even pronounce it.

"It probably will surprise people to see a Gita. We're new enough that we haven't gotten a whole lot of feedback," said Sarvabhauma dasa, a spiritual leader at the International Society for Krishna Consciousness temple in Garden Oaks, which is helping sponsor the Bhagavad Gita distribution locally. "Some Americans might be less open-minded to some scriptures, but I think Americans are becoming much more broad, and acceptance has really grown. Maybe 20 years ago, the acceptance wouldn't allow it."

Even the Gideons International, a group that's been placing religious texts in travelers' rooms for more than 100 years, doesn't look down at its bedside competition and continues to see growing demand for Bibles, though they may not be the only spiritual reading material available. "We as Gideons have no exclusive rights to hotels," spokesman Mac Arvin said.

The Marriott hotel chain, founded by a Mormon, often slips copies of the Book of Mormon into nightstands, and the nationwide Panchajanya Project has distributed more than 100,000 copies of the Bhagavad Gita, mostly through economy hotels and motels.

The Bhagavad Gita is part of the great Sanskrit epic, the Mahabharata, a vast ancient text that's more than 1.8 million words long. It's well known and well read across India's regions and religions but holds a special significance for followers of Krishna, who believe it establishes him as the lord of lords, above other divine forms.

"The main interpretation is that the Gita is promoting a monotheistic message of devotion to Krishna as the Supreme Absolute Being, God the Father," said Edwin Bryant, a professor at Rutgers University who also teaches workshops about the Bhagavad Gita. "But there are differences as to whether Krishna is an incarnation of Vishnu, or Vishnu of Krishna between the sects."

The Bhagavad Gita emphasizes spiritual duty and refuge in Krishna while introducing concepts including a personal god, reincarnation, and the difference between the body and soul. Each Sanskrit line is transliterated and then written in English, with a discussion of the nuanced meaning of the text.

"For me, it reassures my faith. Every time I read it, I have a deeper understanding. Krishna is slowly revealing the knowledge to me," said Manish Puri, who has organized the Gita distribution across Houston. "This is essentially the Hindu Bible, but it's also much more than that. It is a universal message."

Puri has to keep up with demand for the scripture, raising money to buy more copies to replace the ones that get taken. He recounts stories of people who have become devoted to Krishna after reading the books, whether just in the personal spiritual practice or through temple worship.

"Anybody can take up this message and live a life like that. It's not like you have to become a Hindu. You can just follow the teaching at home," Puri said.

The Hare Krishnas are considered one of the main outreach wings of Hinduism, according to Bryant. They are known for donning bright-orange robes to distribute their texts and talk about their faith in public places, from bookstores and concerts to street corners.

The guru who founded the Hare Krishna temple in Houston, Swami Prabhupada, emphasized the distribution of the Gita, calling it "the most important task in our society," a way to share the knowledge and consciousness of Krishna, their god.

QUOTES BY THINKERS INSPIRED BY THE BHAGAVAD GITA

"In the morning I bathe my intellect in the stupendous and cosmogonal philosophy of the Bhagavad Gita, in comparison with which our modern world and its literature seems puny and trivial."
– HENRY DAVID THOREAU

"When doubts haunt me, when disappointments stare me in the face, and I see not one ray of hope on the horizon, I turn to Bhagavad Gita and find a verse to comfort me; and I immediately begin to smile in the midst of overwhelming sorrow. Those who meditate on the Gita will derive fresh joy and new meanings from it every day."
– MAHATMA GANDHI

"The marvel of the Bhagavad Gita is its truly beautiful revelation of life's wisdom, which enables philosophy to blossom into religion."
– HERMAN HESSE

"I owed a magnificent day to the Bhagavad Gita. It was the first of books; it was as if an empire spoke to us, nothing small or unworthy, but large, serene, consistent, the voice of an old intelligence, which in another age and climate had pondered and thus disposed of the same questions which exercise us."
– RALPH WALDO EMERSON